It is with great sadness I acknowledge the passing of Sandown’s longest living Life Member Ray Byron on Monday December 27.

Passing at the fantastic age of 95 Biro as he was affectionately nick named made an extraordinary contribution to our club right up until his death. Ray was a West Coburg boy and a handy footballer as a youngster. He had a run with the Essendon Reserves, a club he supported all his life, and played VFA at Yarraville and Mordialloc. He worked in the Lincoln Cotton Mill during the Second World War and five years after the War became a bricklayer, during that time he met his Wife Joan. He joined the Board of Works as a Brickie working his way up through the ranks to a District Maintenance Officer for the Dandenong area. He retired from the Board after 39 years of service.

The first bet he had on a greyhound was a hurdler named Blue Lip at Napier Park. He worked at Napier Park for track manager Frank Morgan and was paid two bob to slip the pacemaker and clean up the catching pen. In those days he also attended the Maribyrnong track, Ray’s father always raced dogs, so he helped out from a young age and also assisted his uncle, former Carlton footballer Rod Mclean. He knew and learnt from legendary West Coburg trainers Sid Barrett, Jack Kelly and bookmaker Joe Bell.

Ray started training a whippet before greyhounds and had a break when he got married. After moving to Dandenong in 1958 he assisted leading Victorian trainer Paul Hogan, also a Sandown Director for 33 years, with his team of greyhounds. Ray branched out on his own in the 1960’s training without a break until the late 1990’s.

He raced many top performers and considered his best Welcome Girl, a bitch he bred and raced in the mid 1970’s, even though All Promise won the 1980 National Distance Final at Sandown. Another he bred was Perfect Promise who made the Silver Chief final in 1977 which was won by Satan’s Legend. Along with Rupert Lee, Fred Booth, Fred Abel and a few others Ray was in the original group that started the Cranbourne Club and was involved for many years of its early success.

He joined our club at Sandown during the 1960’s through his association with the legendary Jack McKenna, a man Ray always acknowledged as one of the most important contributors to greyhound racing of his time. Ray was elected to the Sandown Board as a Director in 1980. He at all times tried to represent as he called them the ‘dog blokes’. He was made a Life Member in 1995 and retired as a director in 1998.

The best greyhounds he ever saw race were Zoom Top (by a mile), Cheltenham Lass, Black Top and Highly Blessed. Recently giving mentions to Kantarn, Fanta and Fernando Bale. It was for me a privilege to have known Ray after becoming great friends in the early 1980’s. He was a wonderful family man, extremely good company and had a profound knowledge of our sport. He could be a funny man, loved a bet and people of all walks of life. He was certainly a larger-than-life character.

On behalf of the Sandown Club we send our condolences to Joan and Ray’s extended family, we will miss him.

South Australian Howard Gray passed on his memories of Ray.  Sorry to see that another great of greyhound racing has passed on. Vale Ray Byron. Had the pleasure of meeting and spending time with Ray when over staying with his great mate Ross Mitchell, both tireless workers for greyhound racing over their many years of involvement. Top bloke and a real character.

In an earlier post Howard Gray had brought up Sandown’s oldest current living life member Ray Bryon. I think Ray’s 95 I went to his 90th. Joan is still going strong she is about 93 looks 75. Long serving Sandown Director a great bloke. I have fond memories at Sandown Horse track every Sunday morning slipping our dogs up the Steeple track behind Ray’s battery lure. John Reid would run up and back like he was 25 years old. Somehow Ray was sweet with the Track manager and had his own Key to the back gate. Here’s Ray and Joan after winning the National Distance with All Promise, Joan’s giving the dog a Kit Kat they would throw her in jail for doing that these days. Biro gave me this pass which was handy for a number visit’s to the Committee room.

Doug Scott – Sorry to hear that a great guy…doug

Lesley Green– RIP Ray Byron, I knew him for many years at Sandown he always had a smile

John Reid- Farewell Ray,thanks for all you did for so many in our sport.condolences to your family.

Shane Hookey– RIP Ray,as a young bloke in the 80s,Ray and the crew at Sandown always welcomed us young blokes and encouraged us,to keep an interest in the greyhound industry,we were always welcome after the last in the committee room,was a committee man at Cranbourne too,the greyhound industry has lost a super bloke ! Good on ya Ray ! Condolences to his family,on his passing.

Robert Britton– Sad to hear of Ray’s passing. What a champion bloke who always had a great story to tell every Thursday night.

Ken Bailey– RIP Ray, great friend for many years. Love to Joan, Jenny and Suzie and their family’s.

Cheryl Pirani– A lovely Man. Condolences to his family. 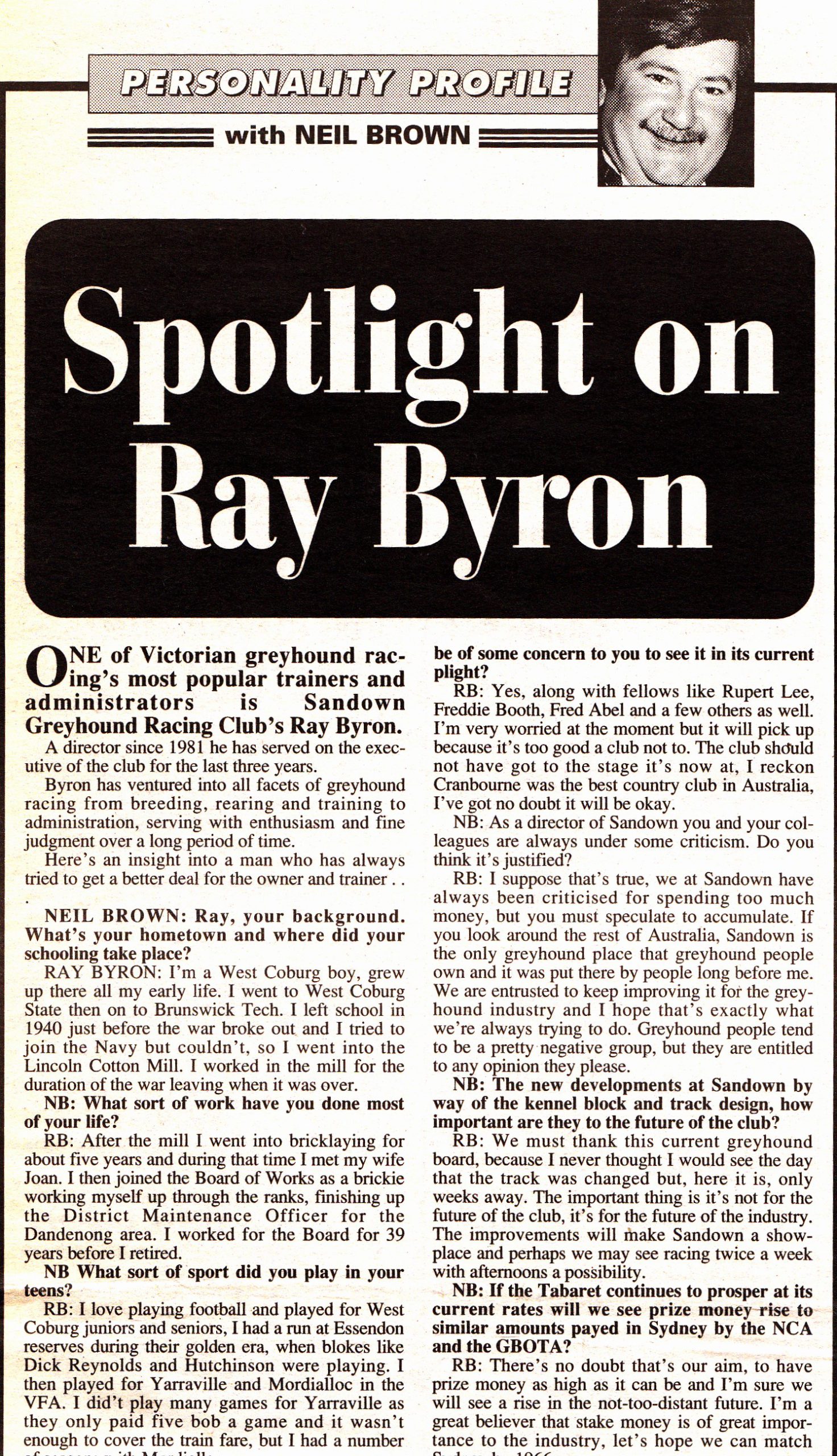 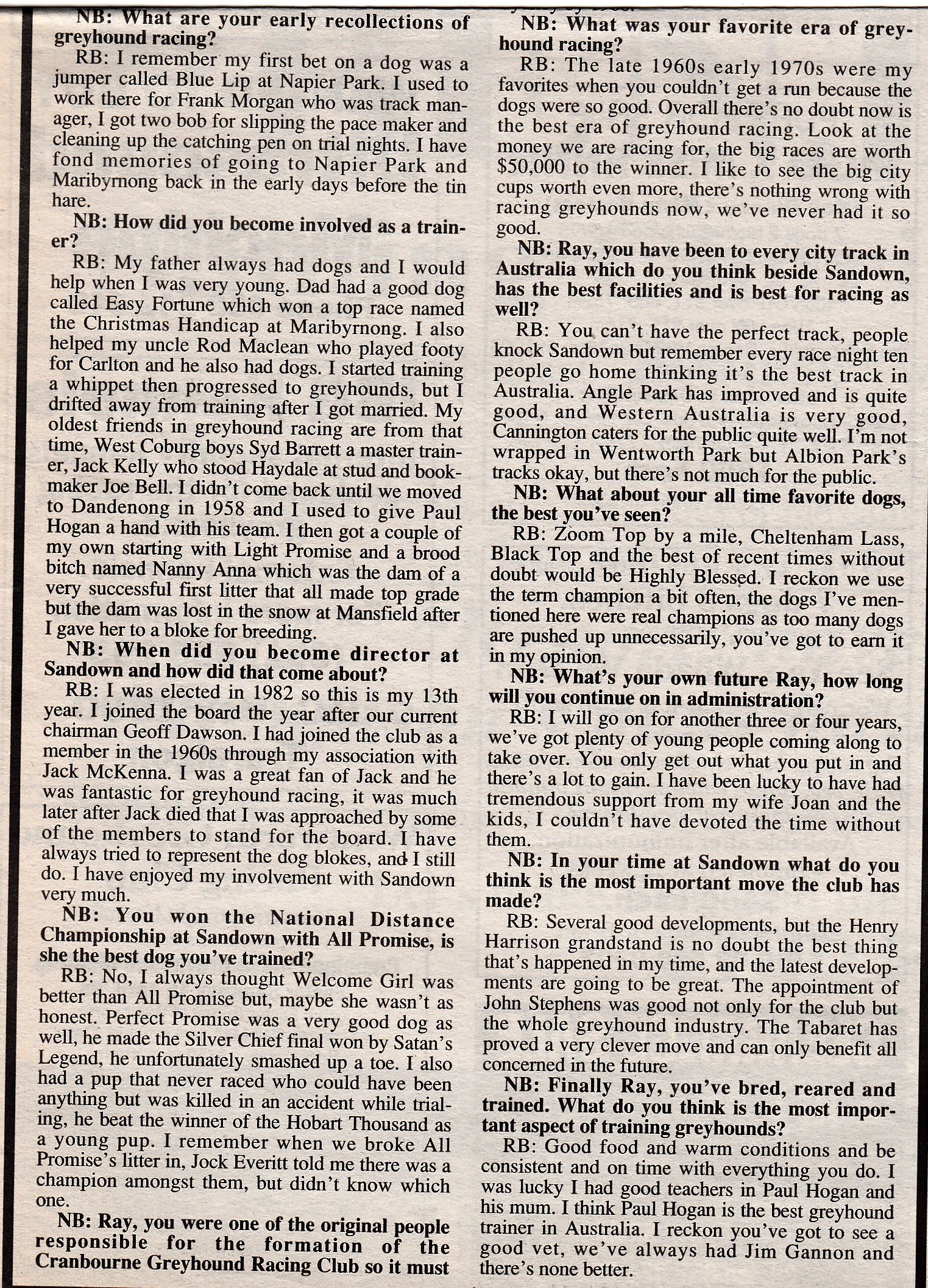 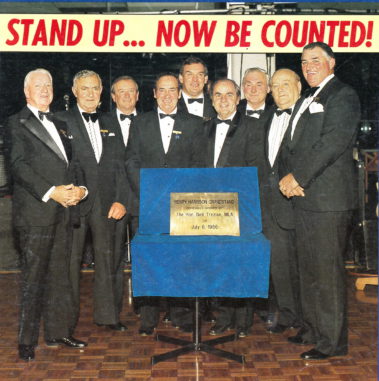 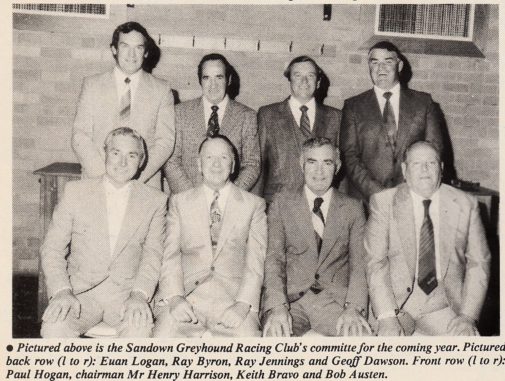 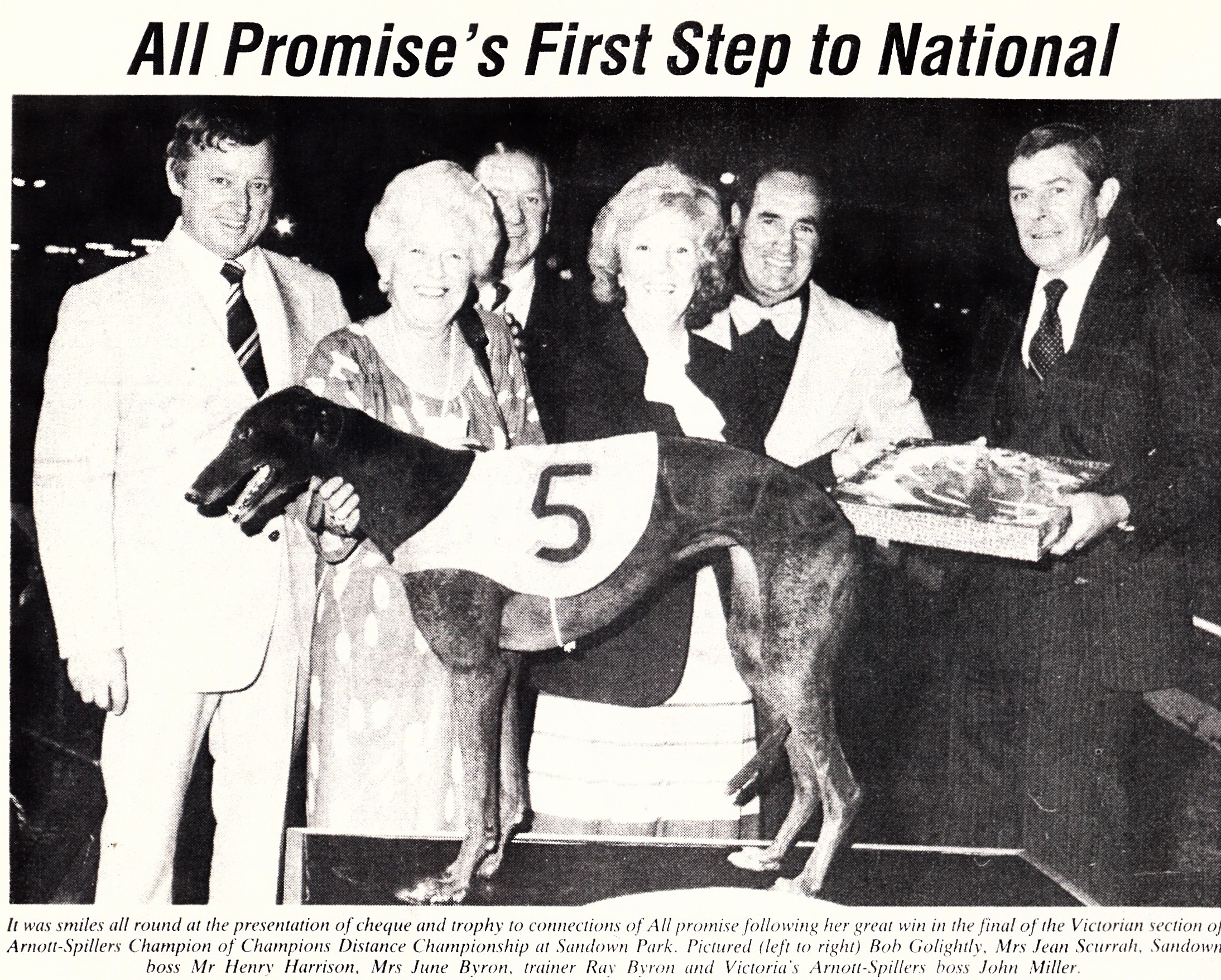