Had many conversations while in Sydney for the Easter Egg. One was in regard to the biggest dogs we could remember racing. I recalled Big Nick and Kid Campbell. I then came across this story today from 1997. The well named Bean Stalker.

Richard Codd – Looked like an irish coursing dog
Simon Anderson– Troy Butler big fella was bred in the purple…u might top this fella in 12 months
Dean Goff– Kerry Hawkins bloody hell that’s a big boy
Michael Hooper– Bean Stalker is the biggest modern era greyhound I remember
Gary Smith– I had a dog named Special Service who was about 41 kgs
Howard Gray– I trained a pretty fair SA stayer called Blue Apex that raced at around 42 kgs, only greyhound I ever had over 40 Kgs
Dennis Huxley- I remember there was giant 42kg, give or take a kg, plus dog in the ‘70s called Gun Carriage. I recall that because one night at Olympic Park he fell at the first turn in a 732m race.
He got back up but appeared stunned and did not chase the field. The race still had a lap to go so as I was standing directly where he fell, I jumped the fence and carried him of the track.
I still remember the commentator, Bill Collins, praising the good work of the “track attendant.”
Howard Gray– Dennis Huxley Gunboat?
Dennis Huxley– Not sure after 50 years. Think it was Gun Carriage. One certain thing he was a big bugger.
Ken Gill– Howard Gray gunboat was the sire of Kelly fuss’s top producer tricky lass ??
Howard Gray– Ken Gill Yep, a fast front running stayer, one of Roddy Deakin’s breed out of Bolta from memory….but he certainly had a few tricks, almost certain he got a couple of tickets for fighting.
Glenn Huxley– Don’t forget a chaser called Jungle Bid. Can’t remember his weight but stewards ruled that he must be loaded first due to his enormous weight.
Larry Alfred– I don’t recall kid Campbell being all that big , and I had him on the lead as a stud dog . Talking big greyhounds I had one that raced at 42.5 kg he died from a twisted bowel.
James Fitch– I recall a dog called peppoloa who was around the 42kg mark from memory
Damien Bates– We had a dog Dyna Virion . Heaviest he started at was 43.5 absolute monster . Used to drag you to the boxes. Just hold on for dear life 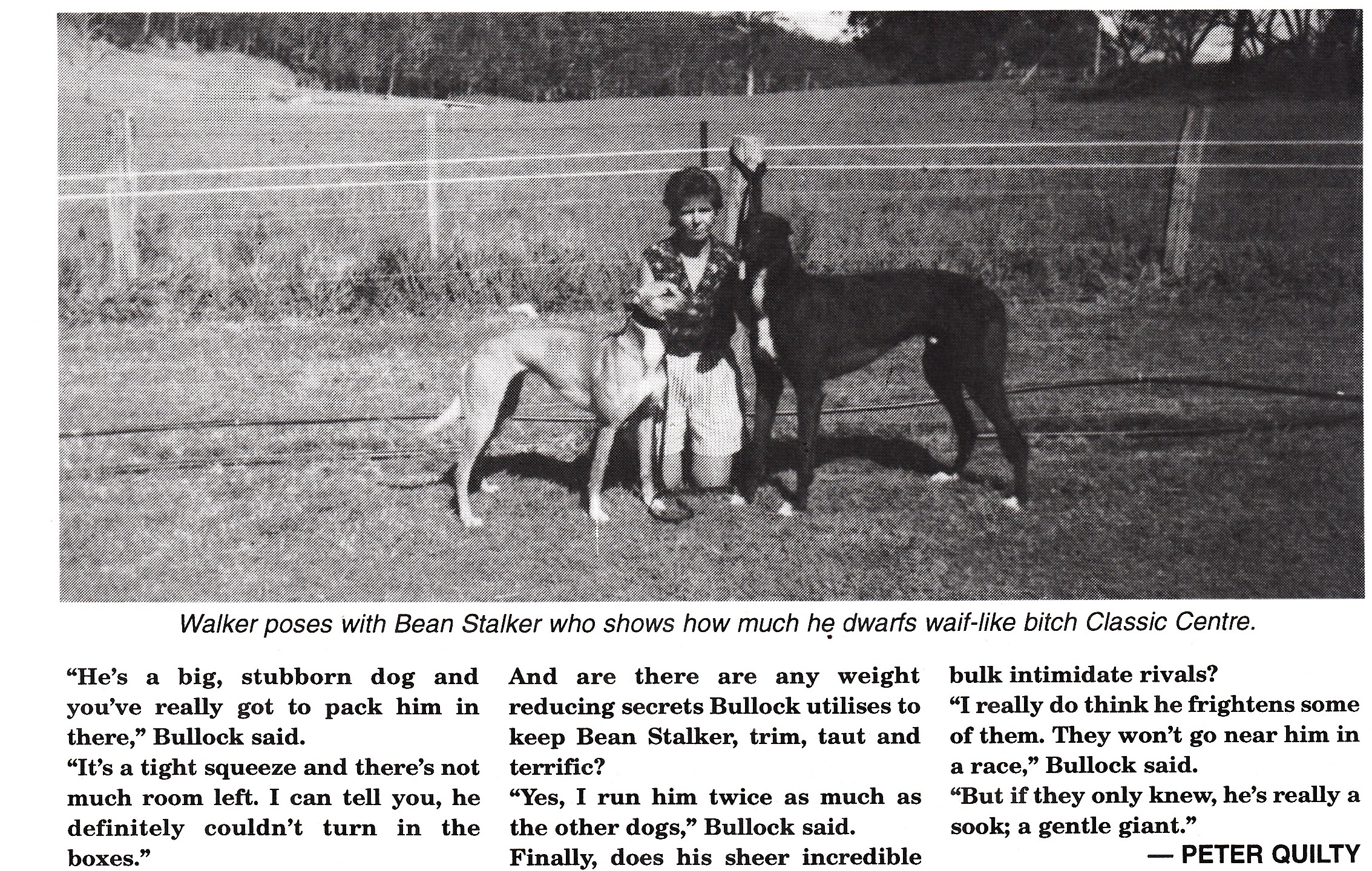