GCA Hall of Fame icon Paul Wheeler and how he reared pups back in the 80’s. 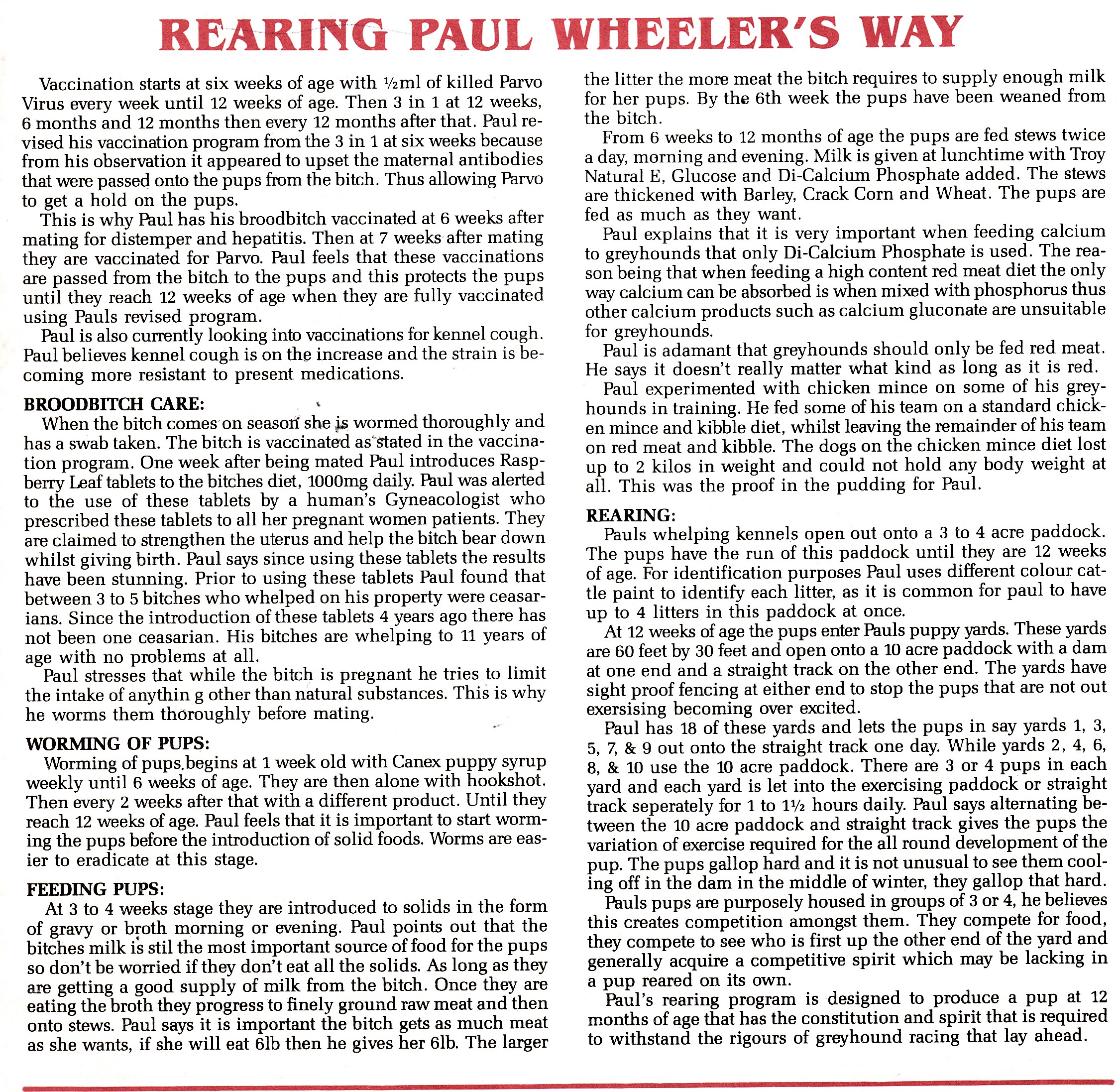 Ken Norquay – I agree Jeff. I used to go out to Allen’s property, mark up and ear-brand his greyhounds. He actually named a greyhound after my first son, Clinton Lee!! Great bloke and with Hec and Leah Watt, Jim and Christine Coleman there was no better time to be in greyhound racing in the 70’s.

June Patton – Most old greyhound people did the same but it was victorians that introduced the right way to immunise against parvo and it worked and Paroo disappeared for a while but then vets changed the system and Parvo reappeared
Terry Callen– Good read
David Jensen– From memory had a good article written in the Australian Greyhound Monthly in the late 90,s on the wheeler program
Howard Gray– Absolutely o doubt Paul Wheeler is a wonderful rearer but so was Rod Deakin and he reared countless stars of the track that saw no red meat from the day they were born until they went out to his trainers or were sold on. Of course the minced chicken necks and feet were supplemented with meat meal, bonlac (milk powder), bread crumbs and calcium etc in his special mix but chicken was the main protein source.
Bob Watkins– Robynne Black
Michael Phillips– David Jensen you are correct, I was the writer of the story and I spent the entire day interviewing Paul and Jan Wheeler at their Oaks property. They were very generous with their time. It appeared in the Australian Greyhound Monthly and was titled “Whelping The Wheeler Way”. I asked Paul for one breakout tip, which we featured in the middle and it was 1,000 milligrams of Raspberry Leaf to help strengthen the uterus etc. I have a huge collection of memorabilia and I will try and dig that story out.
Terry Callen– Michael Phillips Jason mackays father Ian used to tell me the same tip with raspberry leaf
Michael Phillips– Terry Callen I’ll need to find the original article but from memory it was 1,000 milligrams daily of raspberry leaf tablets but happy to be corrected.
Terry Callen– Michael Phillips it’s stated in the article above you are correct under broodbitch care
John Staines– The wheeler family have reared champion after champion of anyone knows about rearing it’s this family and the Pringle family.
Chris Nutt- The best👍
Peter Ray– Chris Nutt Stew🐶
Jamie Hawkins– Troy Butler
Barry Bryant– He would have learned a lot from his father Alan I’m sure.
John Staines– Yes he would have.