Remember colourful bookmaker Raymore J Millard. Had it covered in two places at Sandown and later on at Olympic moved upstairs and was one out for the dining crowd. Ran into him at Yarrawonga four or five years ago. Very interest chat.

Carlie Xuereb – Had a ponytail he’s stand at Olympic park was behind concession bookmakers I think he’s parents owned millards caravans. Also not far away was Tony Nadella he bet on the Sydney meetings good bloke.

Charlie Xuereb- Some colourful bookies at Olympic park who could forget Victor Ma chewing on his big cigar with the stunning bag girl or Ray Boundy screaming his lungs out and ridiculous prices and Alan king with he’s catch phrase bwot odds. Loved those days and miss them dearly and miss my ole mate and great greyhound trainer and drinking friend Alec Reid

Neil Brown- Charlie Xuereb None better than Alec he was great at both had some wonderful times in his company at the Tweed Galaxy. Super bloke.

Charlie Xuereb- Yes Neil great man great trainer I had dog with Ray Drake who lived across the road from Alec they were the best of mates. I remember a litter that Alec bread out of Rich Marzipan and ray got a couple they all turned out city class dogs I think the bes… See more

Jarrod Sharp-Charlie Xuereb-That was Gold Roulette that Ray had his kennel name was Adam
He could basically talk that boy. I just left his house about 1 hour ago. Him and Gaye going great

Des Dooley- Mark, Robert upset a few over the journey. On one occasion he had a truck load of gravel dumped in his driveway, preventing him leaving his house.

Mark James Pearson- I though you were going to say a truck load of dim sims Des, Question can someone tell me ! What he called (nick name) for Norm Short

Mat Hovey- What year was that Neil ?

Neil Brown- Mat Hovey the Sandown shots were taken in 1973 the Olympic Park dining room shot was 1990’s I think.

Howard Culph- Neil Brown Neil, do you remember the night at OP three races in a row somebody had $40000 on a dog at Bendigo. The dogs were coming through at 10/1 on the price call with punters taking any odds to get on. Must have been a tote operator with a lot of q… See more

Des Dooley- I worked for both Raymore and Terry Millard. Terry had the ponytail and later became a successful horse trainer.
I was fortunate to work for Raymore at Warragul dogs on a Friday night, when on course was vastly different to nowadays. You could not get better tutors than RJ and TL.

Adrian Scott- Des Dooley Centaine went on to be a champion sire. Baghdad Note after he won a Melb Cup?Nothing wrong with your memory Des ✅

Jeff Collerson- Des Dooley Terry trained a horse called Valdoise for my mate Peter McCullen, a dog bookie who brought Waverley Supreme to Australia. Had a big win one day on Valdoise when he won up the straight six at Flemington at 100/1.

Des Dooley- Jeff Collerson Terry never tipped you into one unless it was good odds. He was a good judge. I met Peter McCullen a few times when I clerked for Raymore Millard.

Jeff Collerson- Des Dooley Peter is 87 but going strong, godfather of one of my kids. Great fella, kind as a kitten.

Shane Drysdale- We heard someone had $12,000 on Nitrogen at 10/1 on concession the night he broke his hock at Sandown

Charlie Xuereb- What about Adam on he’s sticks would fall over in the middle of the ring and when people would go to help him he would cus them funny guy.

Shane Drysdale-Charlie Xuereb Nope What was it?

Des Dooley- Red box over the 280m at Olympic. Not sure who’s name, but Reg J may have been advising.

Howard Gray- Des Dooley LOL Advising? The fun and games those boys used to get up to back in the day with their string of top stayers, I’m His Best, Adlington, Priceless Spark and one other I can’t quite recall the name of….Always in the same race in whatever state they raced…..and the one the money came for always bolted in and the others invariably performed below their best.

Neil Brown- I remembered, then only yesterday read about let it drifted from 3’s to 6’s and they went bang bolted in form suggest it was average perhaps it had not been allow to try for a few starts.

Des Dooley- Howard Gray Would the other one be Shiner?

Howard Gray- Des Dooley That’s him, big black dog, they stung the Angle Park bookies several times with those top stayers, used to wonder if the graders were in on the joke.

Charlie Schembri- Magical art trained by sir joe borg us an from St. Albans it was Moomba traffic everywhere. So he walked from the station to Olympic park with his dog and it shit in

Raymond Robey- Yes Charlie,still miss Alec to this day. I had the pleasure and privilige of him staying with me in Sydney and sometimes being “caretaker” trainer of some of his marvellous chasers. Buka sunset ,On the Payroll, Wher’s Boz, Sir Camelot.Rich Roulette to name a few. And as colorful as a rainbow,with a charisma to match. God rest his soul🏆🍺🥂

David Torr- all the great atmosphere has been left behind just not the same any more. 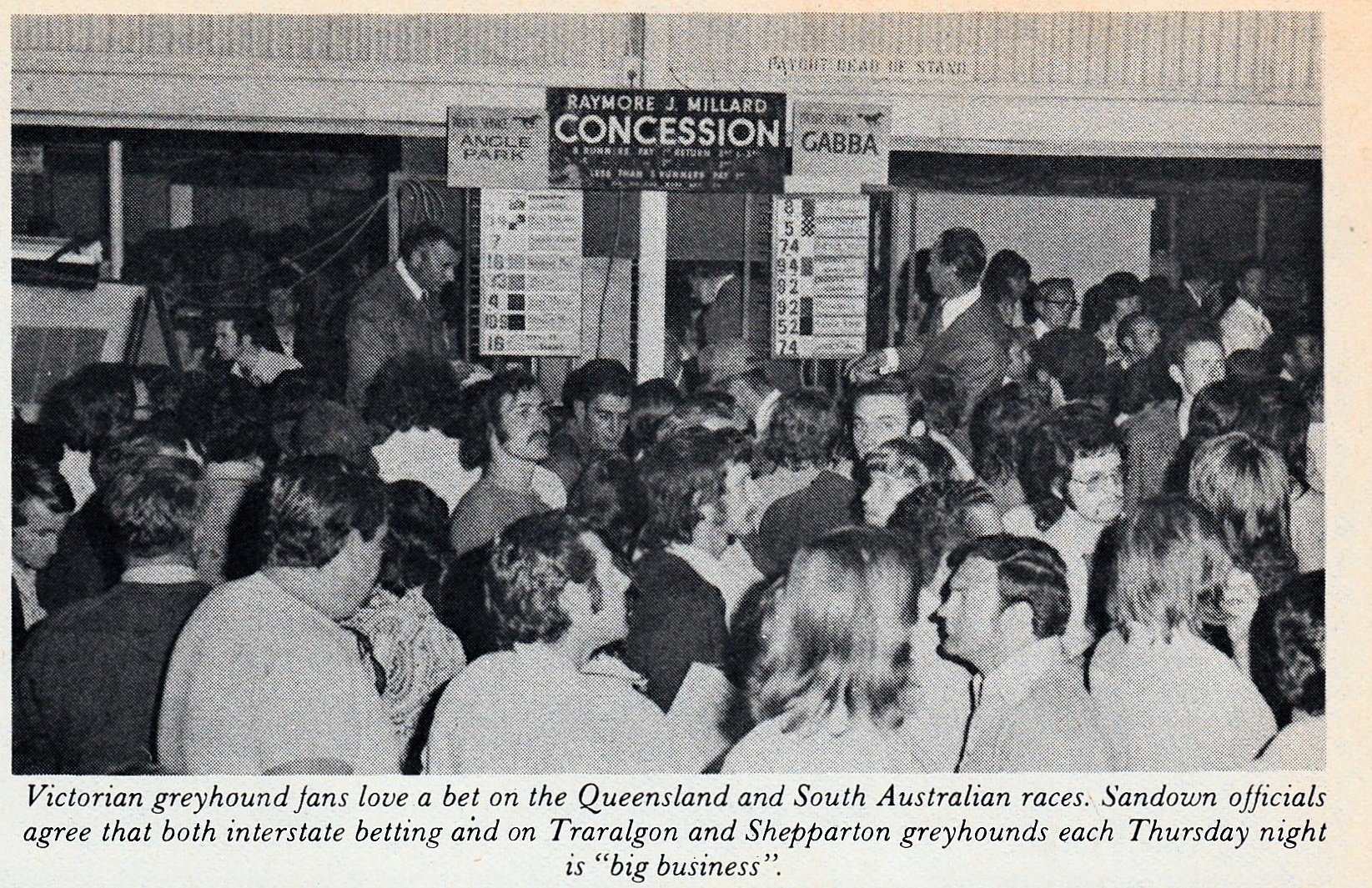 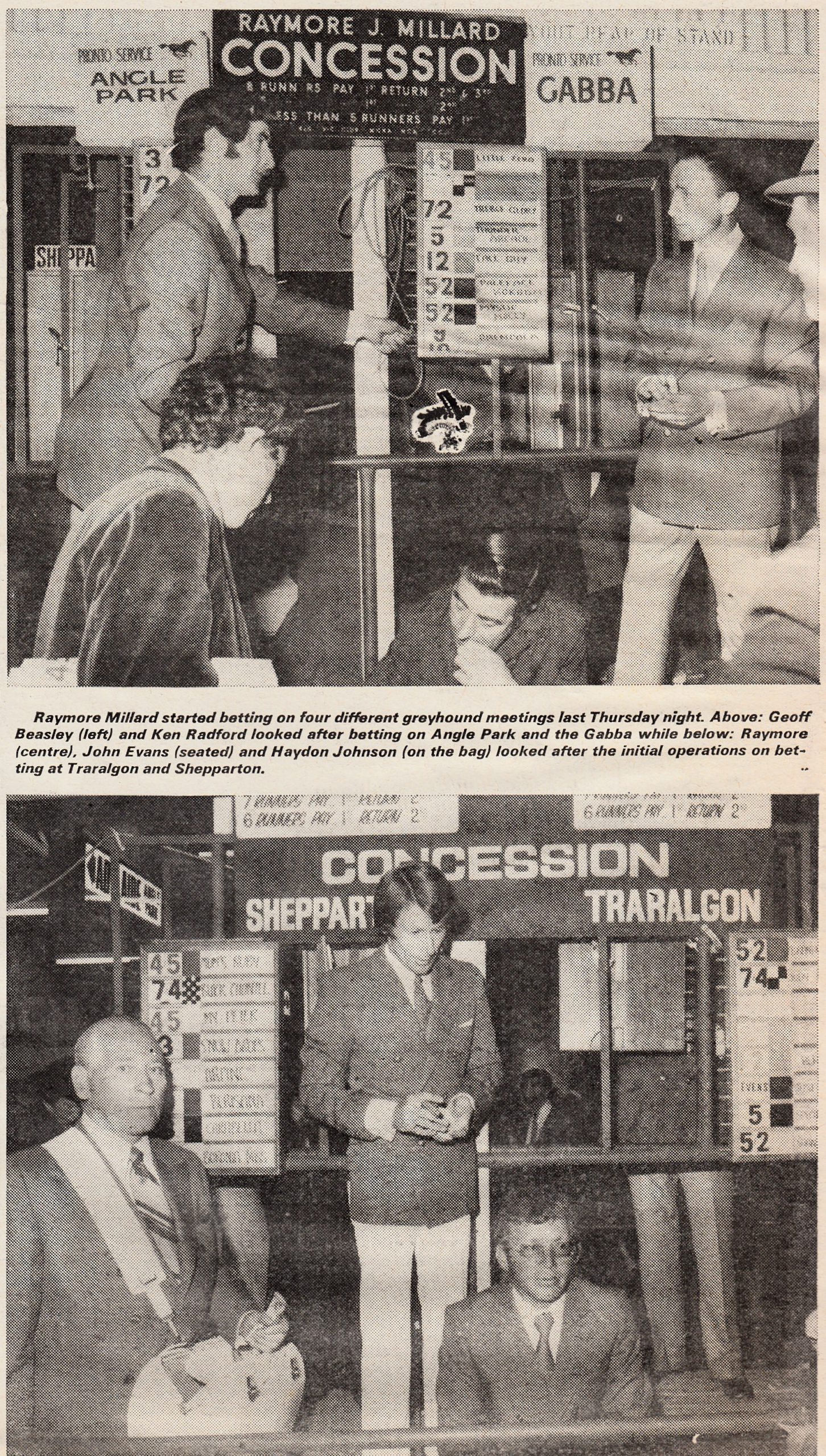 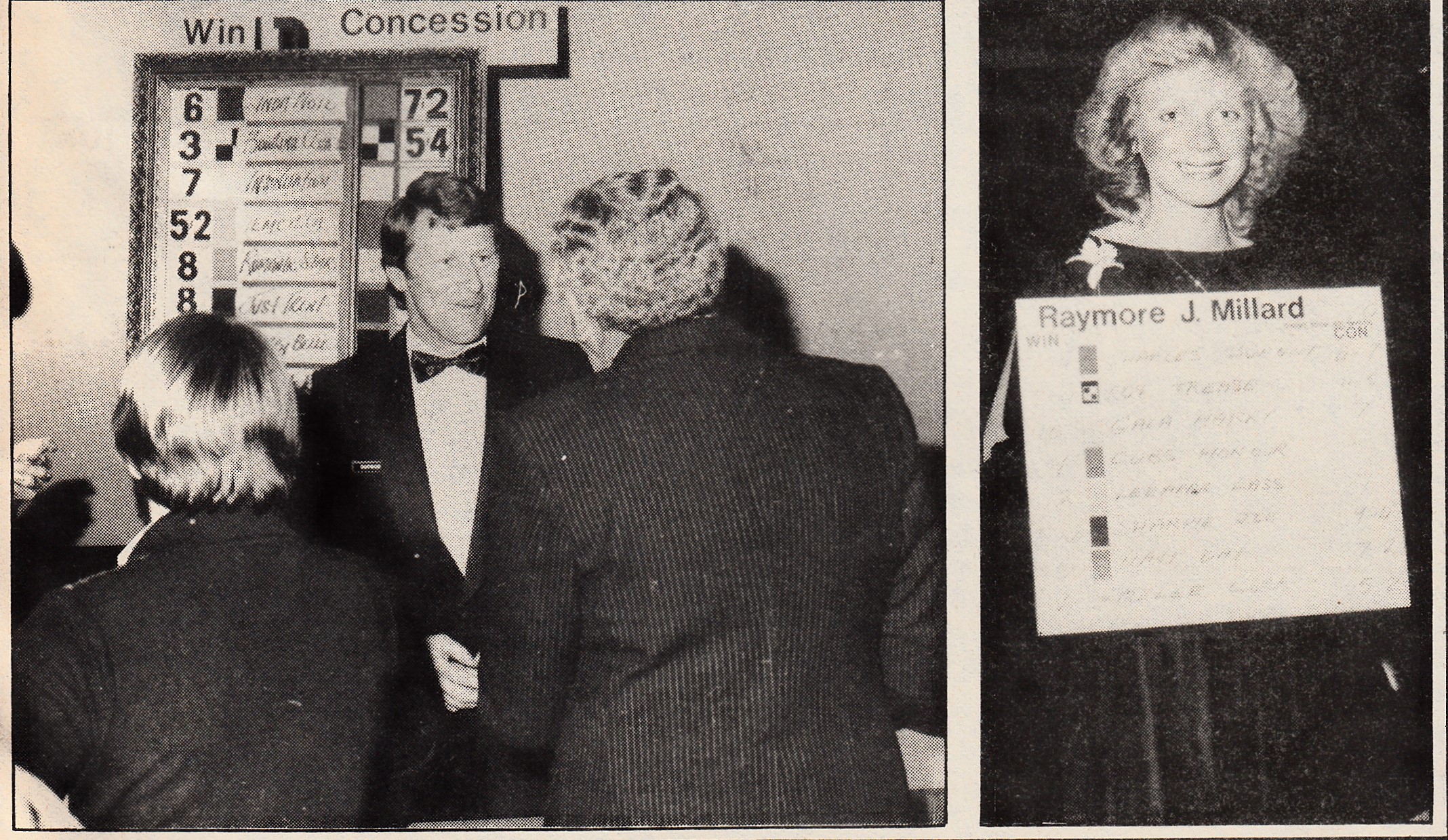