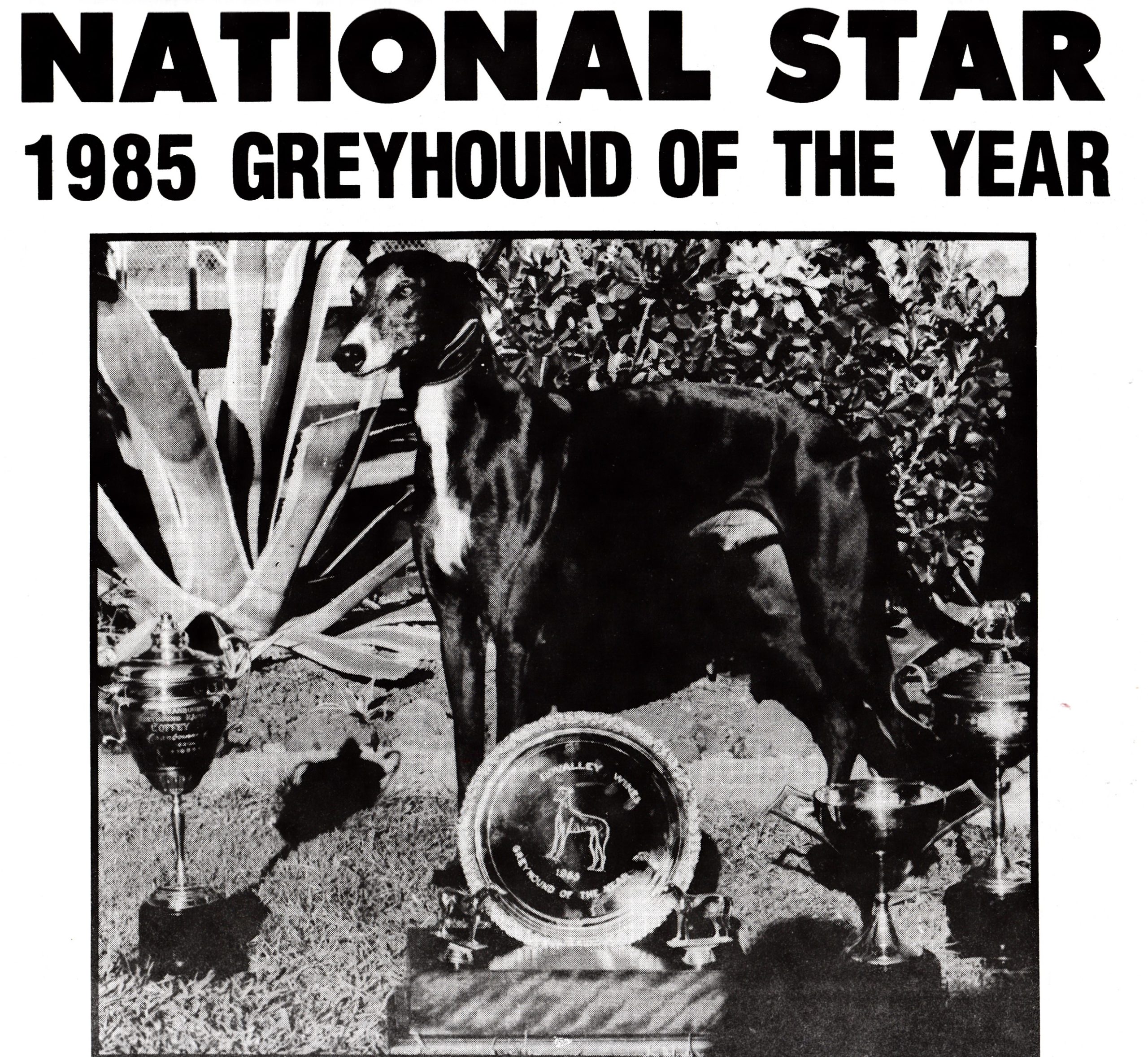 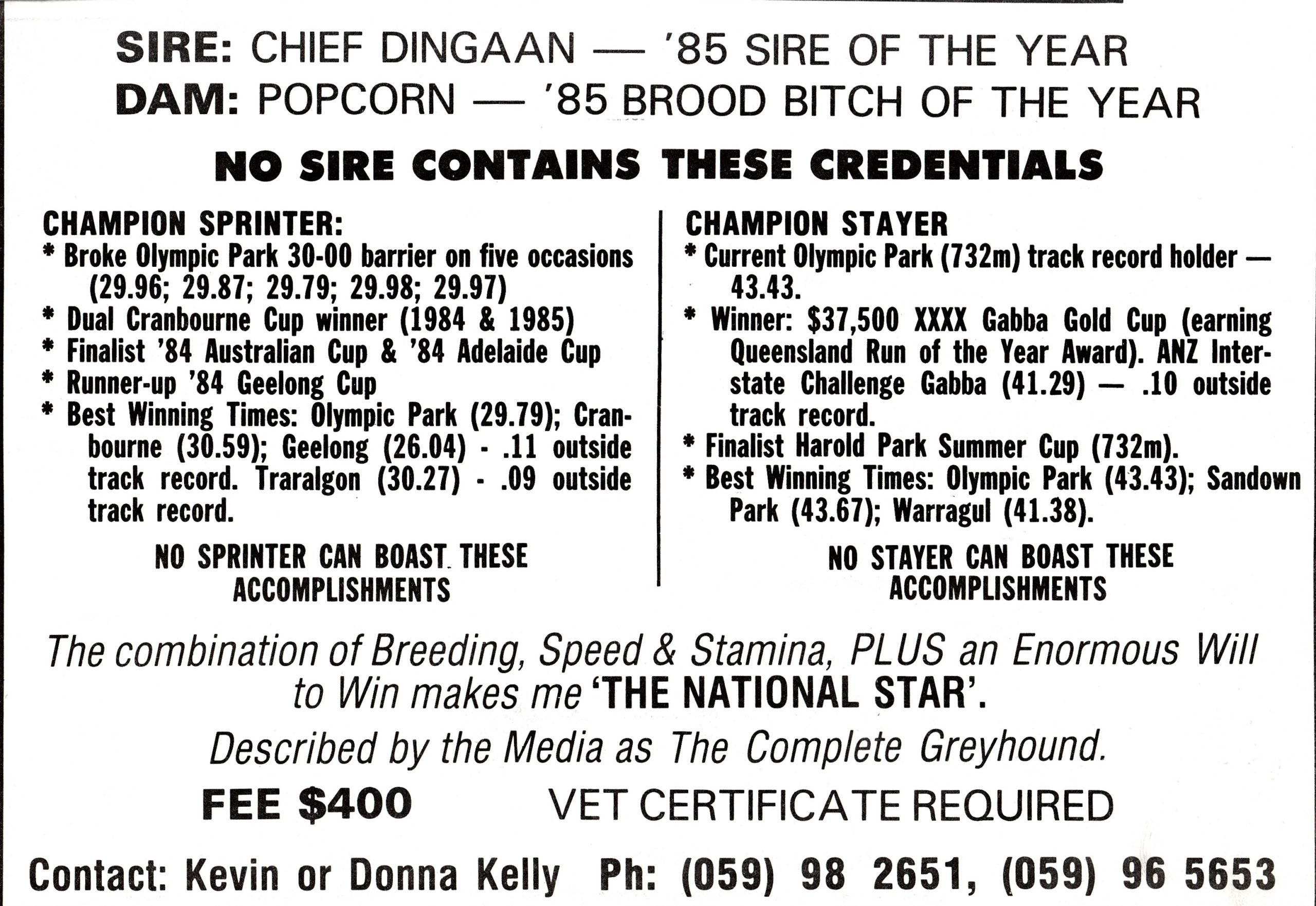 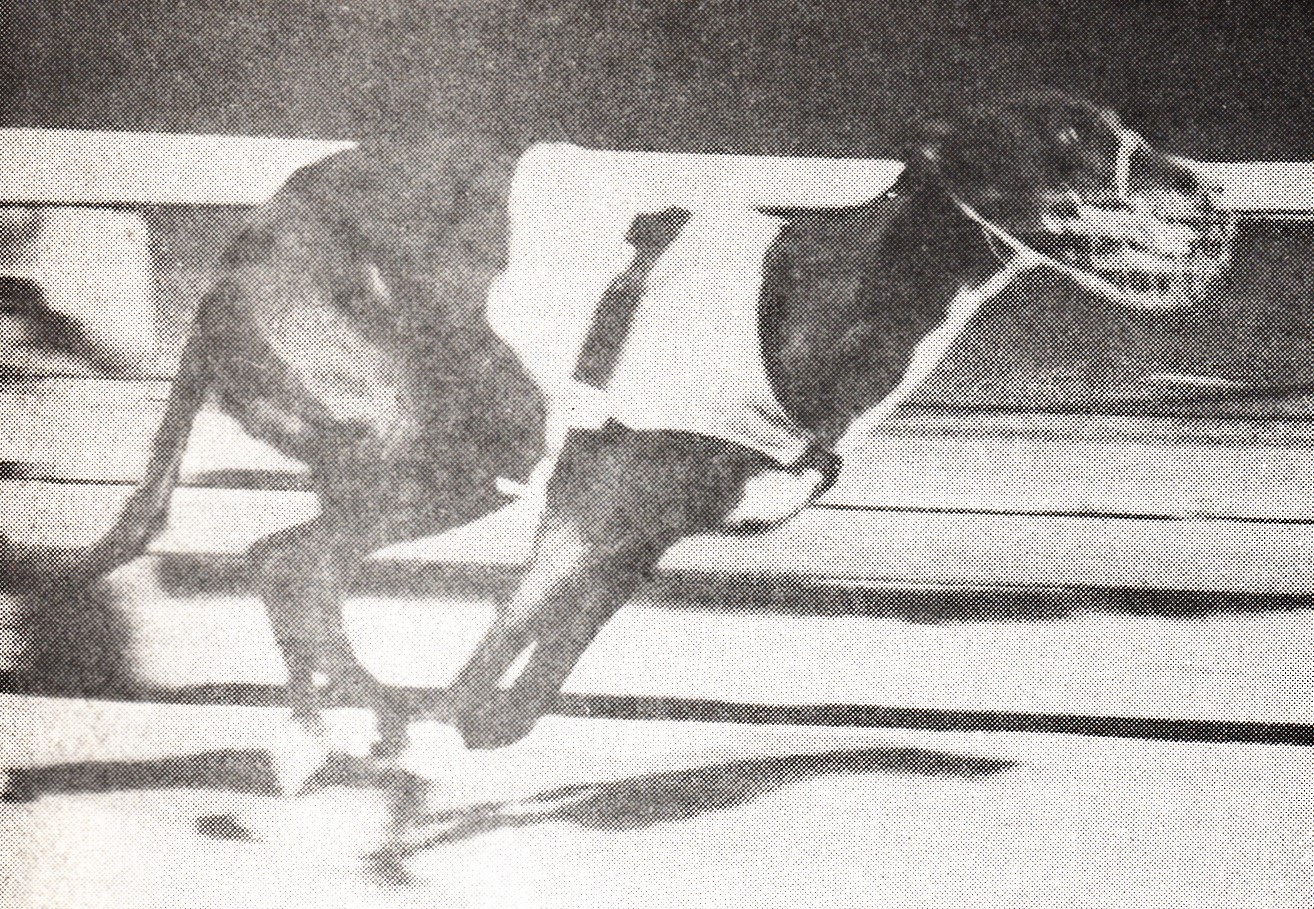 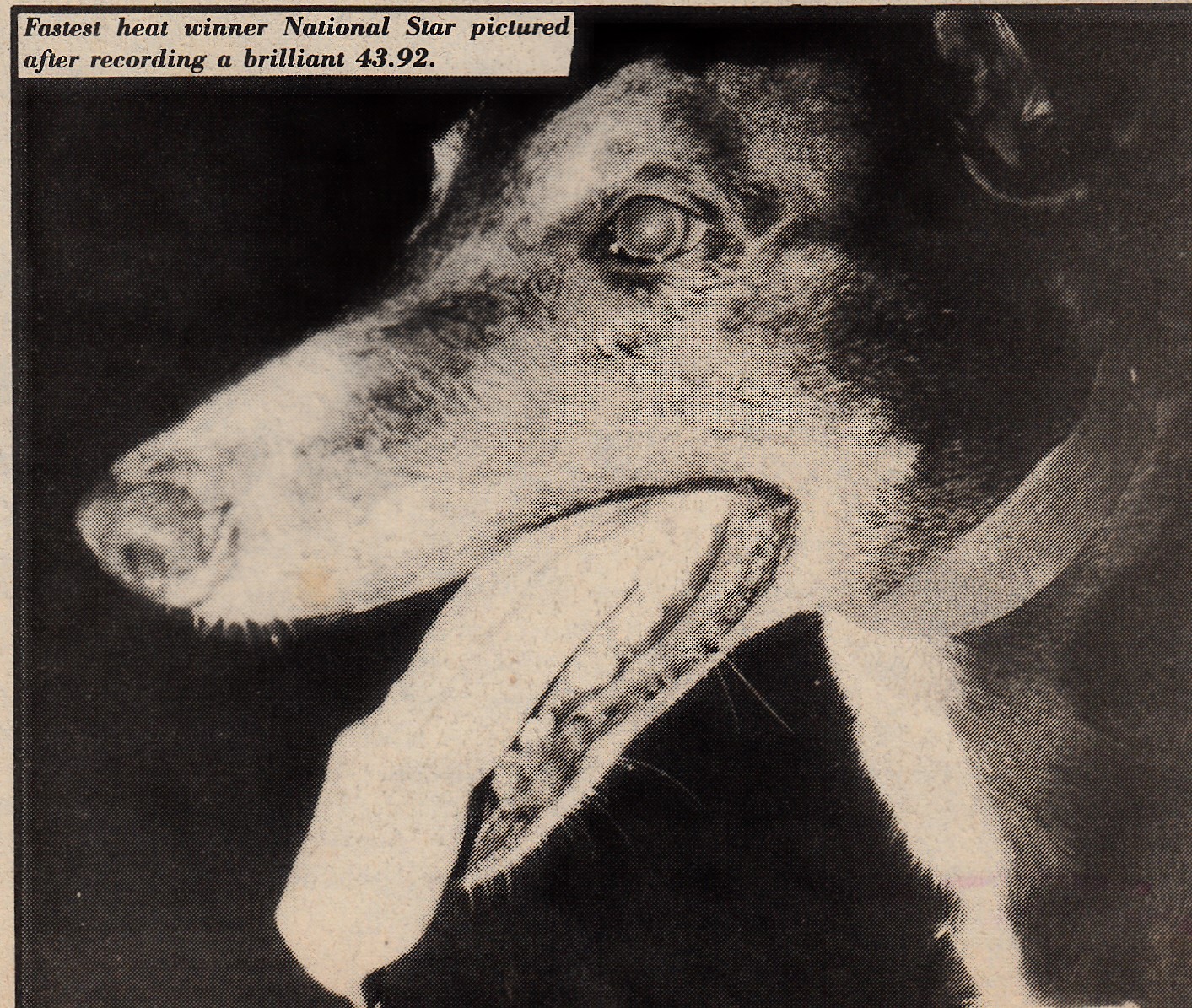 Gary Smith – Best litter I bred was by National Star, liked him after he won a maiden at Cootamundra.

Des Dooley – John, there might be a few others you would invite to contribute as well.

John Reid – Des you made me laugh, I sort of wondered what reaction my remarks might,have a lot of memories I would not contribute,

John Stephens – There were lots of people…who did lots of things…wonder how they would go in today’s greyhound world?

Doug Scott – I wish Buck Buchanan had written a book l could tell so many stories from the fifties but might get sued.

Shane Hookey – Was starter at Cranbourne for 10 years,he was the best dog I have seen there along with Tangairn,National drew 5 in 2nd cup win,best presented dog in it,never going to get beat !
Howard Gray– And I had ro run into him in a grade 5 at Angle Park with a smart little bitch Alma’s Love I was training for long time kennel client Max “Bundles” Bartel. National Star was a virtual unknown coming off a 25 length maiden win at some far flung track Cowra IIRC of course not in Reggy’s name but it didn’t take too long to work out that night something was on when who do I see sitting in the corner of the downstairs restaurant none other than Reggy Johnson and Kevan Kelly. Of course National Star got the chocalates and my little bitch ran a well beaten 2nd. Alma’s Love did have the distinction of leading into the back straight before National Star gave her windburn winning by an ever lengthening margin.
Shane Hookey– Arthur Garret,Kel Thompson,Gino Micalleff,just to name a few !!

Howard Gray– Shane Hookey Funnily enough those names are all familiar Arthur Garrett especially, I think he might be Reggy’s brother in law but I’m pretty sure it was another “nom de plume” in this case? 😀 Syd KayeandSid Topp would know? Pretty sure Reg used to s… See more
Shane Hookey– Howard Gray yes Howard all fun times,for want of a better term,always had 2-3 dogs in certain races,mainly distance,seemed the best backed runner won,others down the track,came to a screaming halt at Sandown one night! Don’t know what happened to Reggi… See more

Howard Gray– Shane Hookey Yep, those stayers they played fun and games with were I’m His Best, Adlington, Priceless Spark and Shiner I think, different states, different winner. Funny thing was how often whatever State they were racing in they always had at least … See more

Shane Hookey– Howard Gray Yes Howard,the stayers were their go,good luck to them,still see Kevin Kelly every now and again,wouldn’t get away with it now !!

Howard Gray– Shane Hookey Kevin’s wife is going pretty well with the gallopers isn’t she? Last saw Kevin many many moons ago at the LVA Cup coursing meeting at Mintaro in SA, he was there with Sam Cauchi and the boys, they backed my dog Readymade before the 1st rou… See more

Howard Gray– Shane Hookey Met Barry a few times when I was over staying with the late Ross Mitchell at his Stanley Road Devon Meadows property back in the day, I’m pretty sure he was one of the Sunday morning crew that got together for beers at Ross’ place.

Darren Leeson– What a great era that was!

Sheldon Hamilton– from 460m Geelong cup to 732m Olympic park record holder. Have we seen anything like him since?