It is with sadness I acknowledge the pasting yesterday afternoon of Heathcote greyhound legend Les Slattery at age 90. A prolific breeder he only raced the dogs he bred all were named Ourboy or Ourgirl. The best dog he ever bred was the mighty Carlisle Jack, he sold him to first time owners Max and Carole Sandbrook and recommended they ask his mate Bob Douglas to train him. Les raced Jack’s litter sister Ourgirl Greer she was runner-up in the 2001 Sapphire at Sandown to Let It Be beating home Jack in that final. To explain the type of man Les was Bob relayed the below story to me.
Les loved his dogs. When Bob Douglas was running his business in Melbourne, he got home to Heathcote one night and his wife Faye said Les had rang and said he’s had a Heart Attack and could Bob pick him up and take him to Hospital no hurry, Bob said to Faye you must have got the message wrong if he’s had a Heart Attack it’s got to be urgent. So, he got to Les’s property and Les was feeding the dogs some sixty in number at the time. Bob said to Les have you had a Heart Attack, to which he replied “Yeah I had a blood test this morning and they rang and told me to get straight to Hospital.” Bob immediately said well let’s go, he said no I have got to feed the dogs. Bob told him sit down and he would feed the dogs and then they would get him to Hospital. Bob fed the dogs and pups, but while driving past the house on the way out Les said stop I got to see if the race dogs got a start at Bendigo it via Fax in those days. Bob said you have got to be kidding but he stopped him again on the way past a Newsagent to pick up the Greyhound Weekly. “If I am going to be in Hospital, I will need something to read.
Les was legend.
A tribute published on the GRV Website by Gerard Guthrie.

Victorian greyhound racing is all the poorer for the passing of veteran trainer/breeder Les Slattery at 90 years of age.

“Les just loved racing. From the horses to the dogs, if it was racing he was knee-deep in it,” said close friend and fellow trainer Daniel Pell, who Les took under his wing at a very young age.

“He was great to me, not so much as a mentor but as a friend.

“He would never see anyone go without. If you were in need, he’d be there for you.

“Les paid it forward and it came back to him in his later years when he lost his driver’s license and Jason Formosa used to drive him around trialling and racing and he was able to keep training winners.

“As a kid I spent most weekends with Les. Back in those days you didn’t need a catcher’s license and when I was about eight years old I said, ‘Mr Slattery, could I please catch your dogs for you?’

“Bendigo used to race on Monday nights and then when I got to about ten I used to go to Cranbourne on Saturday nights nearly every week because I didn’t have to go to school the next day! Peter Frost and Ray and Judy Morgan also used to come along regularly.

“Les was a horse man at heart and trained a few gallopers, while he also raced some pacers with Terry French at Heathcote.”

Described as a Bendigo icon in a Facebook tribute by Bendigo Greyhound Racing Association, Les’ greyhounds raced under his Our Boy or Our Girl prefix, with his finest including Our Boy Laddie (17 wins), Our Boy Ducks (11 wins), Ourgirl Greer (11 wins) and Our Girl Olivia (13 wins), the mother of champion sprinter Carlisle Jack.

“Les didn’t have any family and he used to name most of his dogs after his friends; they were either Our Girl something or Our Boy something,” Daniel explained.

“Our Boy Laddie was one of his best. He ran second to China Trip in a Cranbourne Cup and won the Easter Cup at Olympic Park. I think he won over 500, 600 and 700 at Olympic Park.

“Next best was probably Our Boy Ducks. He was really injury-prone but Les got him to win half a dozen Free For Alls at Olympic Park.

“Our Girl Olivia, who was the mother of Carlisle Jack, was a really good dog too. I remember she ran third in a heat of the Geelong Cup but she beat Flying Amy home and Les said I don’t care where she finished she beat Flying Amy!”

Daniel’s fond memories of Les aren’t restricted to the racetrack.

“At one stage when Les was in between jobs he drove taxis in Melbourne for a while,” Daniel recalled.

“I asked him who was the most famous person he picked up and he said Johnny O’Keefe. When he dropped Johnny off he asked Les to come in for a drink and he didn’t get back to work that night!”

“Les was a terrific bloke, a real character who lived for his dogs,” said Bendigo GRA President Bob Douglas, who trained Carlisle Jack.

“Les bred Carlisle Jack and when he sold him he told the owners he would get a friend of his, which was me, to train him.

“We were actually getting out of dogs at the time but Les rang me and said you told me you’d take him so I said to my wife, Faye, that I’d take him for six or eight weeks and he’ll probably end up being no good. He turned out to be Carlisle Jack!” 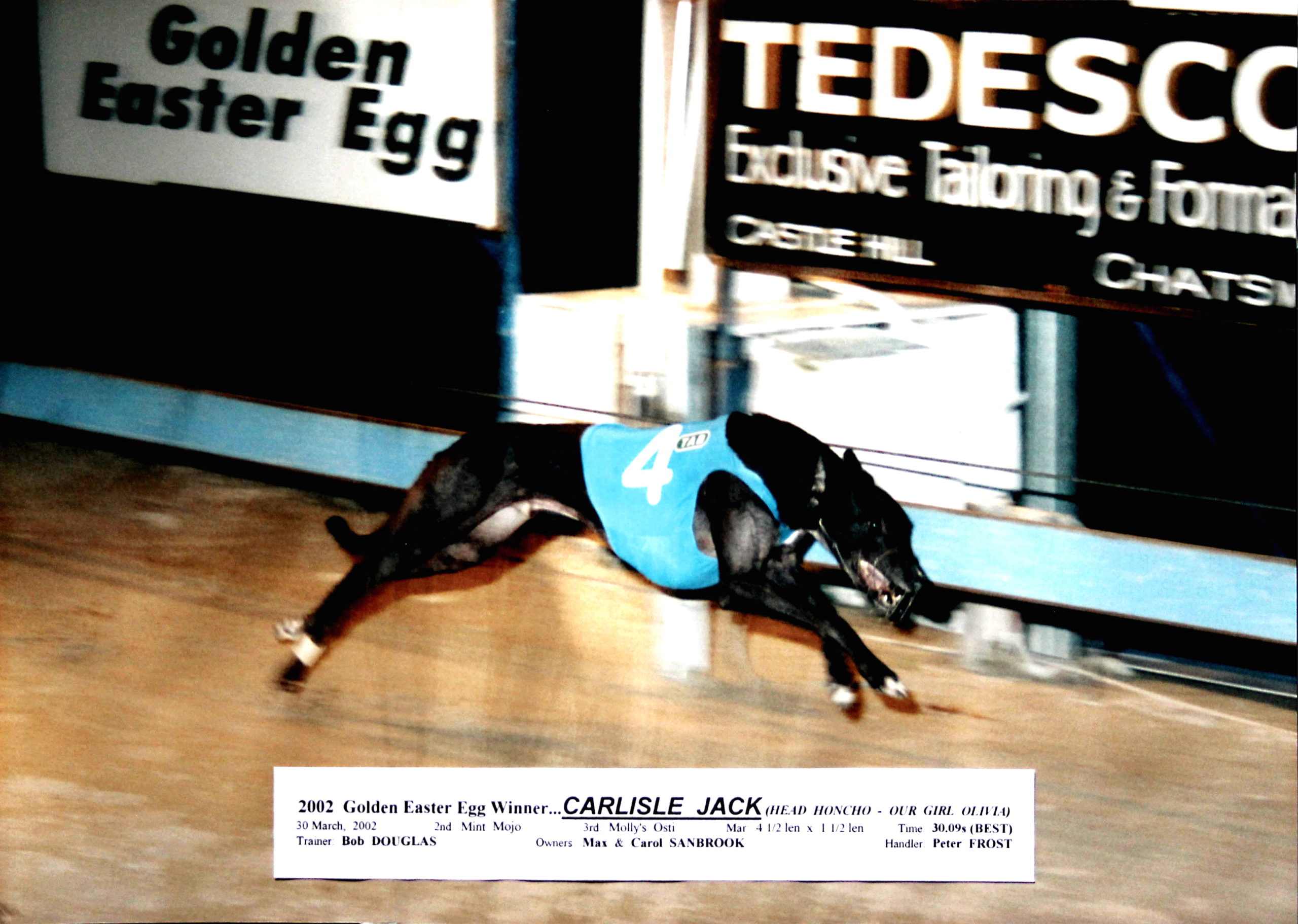 Paul Mills -Rip in peace Les what a character
Alan Marum– Great man…great trainer + breeder….and had some great stories…. RIP Les my friend….my life is better for meeting you… The adventures of Les should be made into film…😇🤔😄
Howard Gray– Sad to hear, great character and trainer. R.I.P. Les
Gary Smith- RIP Les , a true gentleman, will be sadly missed 🌹🥲👍
Chris Johannsen– RIP Les a lovely man
Terri M Morris- What an amazing man with 90 years worth of stories. Rest peacefully ❤️❤️. Sending hugs to his family and friends.
Darren Cairns– R.I.P Les, terrific bloke, greyhound racing will certainly miss him, condolences to his family and friends. ⚘⚘⚘ Cairns Family
Ian Garland– Sad news RIP Les
Brian Fothergill– RIP less, he was a very nice man & a gentleman
David Anthony D’angelo– Rip les
Alan Ferguson– Rip les
Robert Britton– So sorry to hear. Always had a smile and was great for a chat. One of the best.
Gayle Lemin– 31 years ago when I moved to the area Les was the first person to call in and offer to help if I needed it. Great friend. RIP Les
Majella Ferguson– RiP Les
Karen Repia– RIP Les
Jess Fozz– Rip Les , we had some good trips on the way to the races old boy
Brenda Kinder– Oh so sad RIP Les x
Petra Marek– R.i.p les u were fantastic person so sorry for your passing condolences to the family
Sarah Fothergill– Rest In Peace Les 🕊
Marg Long– Nice man
Raymond Whybrow– RIP Will be missed .
Heather Cooke– One of the gentlemen of our game. a smile a chat and advice if asked. RIP young man. Condolences to the Slattery family.
Ronald Lyfield– R.I.P Mr Slattery
Brian Parkinson– Good man, condolences to family and friends.
Steve Shinners– RIP les 😢
Dave Jones– Lovely to read. 🙏🙏
Edwin Caruana– One of a kind, RIP Les. Sincere condolences to the family.
Wal Harkins– great story a real legend R.I.P
John Stephens– Always happy, always proud…a true gentleman and the finest of human beings. Rest well my friend
Gary Robinson– RIP old mate