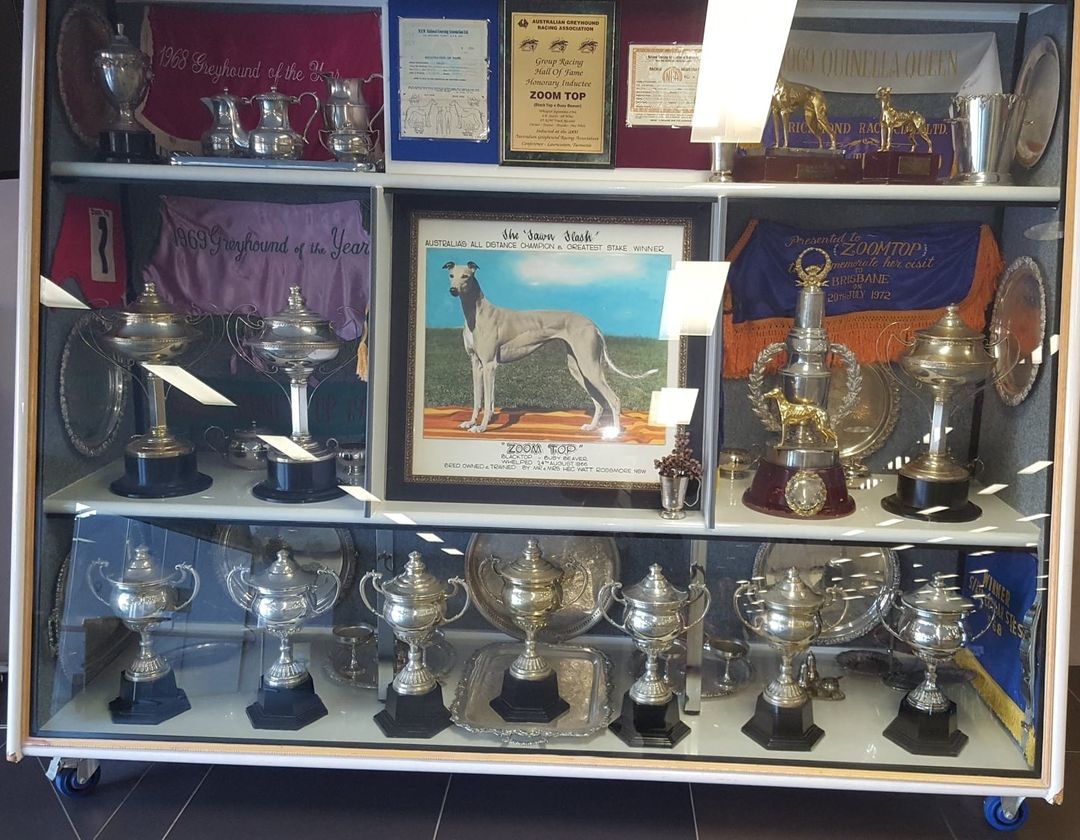 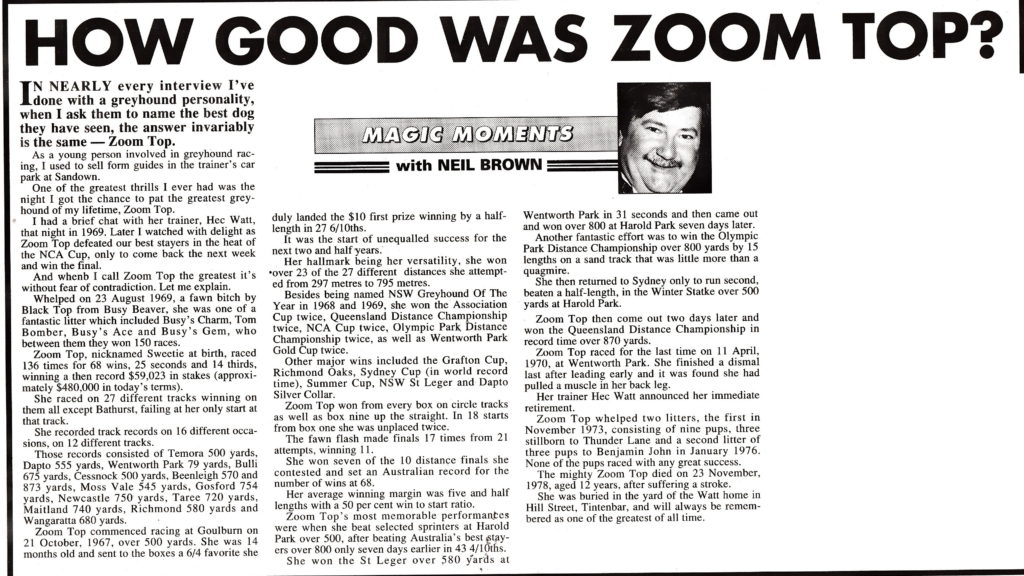 For anyone that hasn’t seen Zoom Top’s Trophy display at Wentworth Park. She was the best of the best.

John Stephens – Indisputably the best ever…hard to say being a Mexican…but the facts are the facts!

Neil Brown – I totally agree. Got to pat her in the Sandown Trainers Car Park in 68 while selling form guides. Chatted with Hec Watt then watched her flog a top-class field later that night. Superstar’s Superstar.

Jeff Collerson – Certainly the most versatile. She would win the top grade 800yds at Harold Park on Saturday and win the top grade 580 yds at Wenty Park 48 hrs later. And if she was beaten on the Saturday her wonderful trainer Hec Watt might trial her Sunday to find out what went wrong!

Ken Norquay – I have to agree that Zoom Top was the absolute best greyhound of her era. Born in 1966, as Jeff C has said, she was the epitome of versatility. Dual sprinter/stayer.

She raced against the very best sprinters in a halcyon era such as the likes of Rokoko, Benjamin John, Princess Kerry, Red Zero and Milimsimbi to name a few. Then she went on to win staying races including the Association Cup (twice), and the 1968 Sydney, Summer and NCA Gold Cups.
In all, Zoom Top contested 136 races for 68 wins and 13 track records across 23 different tracks in three States. Truly one of greyhound racing’s absolute Champions.
It’s hard to ‘top’ that!
Barry Lingham – As a sixteen-year-old, that was beginning to grow an interest in greyhound racing. I watched Zoom Top blow away a top-class field at Sandown. Even today at the age of 68, I don’t think I have seen another do the same. There have been so many great dogs that I’ve seen over the past 52 years, but she holds a special memory me.
Kerry Chalker -Just check her record
Shane Drysdale– Before my time but I heard a lot about her, fantastic record
Craig Anderson– Best I’ve ever seen
Joe Baldacchino- The fawn flash!
John Staines– Absolutely amazing
Alan Marum– Saw her win at sandown..lm lucky…but l can only vividly remember it.. She won..
Patrick Parrelli- She was a machine cannot buy them today RIP sweetie
Mark James Pearson– The BEST ever from 300y to 800y 🐾🐾 any day even in a rain coat 🏆
Jan Griffiths– Brilliant no dog could beat her
David Fowler- I remember standing in the back of the stands at Harold Park (where crowds were always 10000 plus and thousands more when she raced) and the cheering would start from when the field reached the start of the back straight (800 yard races started in the home straight) and just become louder until the finish line. She was a great front running stayer and her versatility was seen in her runs up the 300 yards at Richmond straight when she ran 16.0 – only 0.1 outside the track record. When she raced outside the city tracks she would attract massive crowds. She was an absolute star. In those days the only dogs she was compared to were Chief Havoc from the late 40s who broke all sectional records (I think at Wentworth Park where lights were set up to show if the record was broken as he passed the relevant point and an early English champion (I think from the 1930s) called Mick the Miller.