An unusual occurrence in relation to the Traralgon cup is it was run over the staying journey early on. For some reason the committee in 1975 decided to conduct the cup over the staying distance of 730 metres after the first cup was run over 513. Jaymar’s Pride recorded 45.06 in winning in 1975. In 1976 the cup was won by outstanding imported stayer Dunmain Scholar in 44.48 and in 1977 another top-class city feature winning stayer Bolt’s Gift won the cup in 44.25. In fact both Dunmain Scholar and Bolt’s Gift made the final of the 1976 National Distance Championship at Angle Park, won by Bolt’s Gift. The feature in those days was known as the Latrobe Valley Cup which it remained it’s name until changed in 1981. 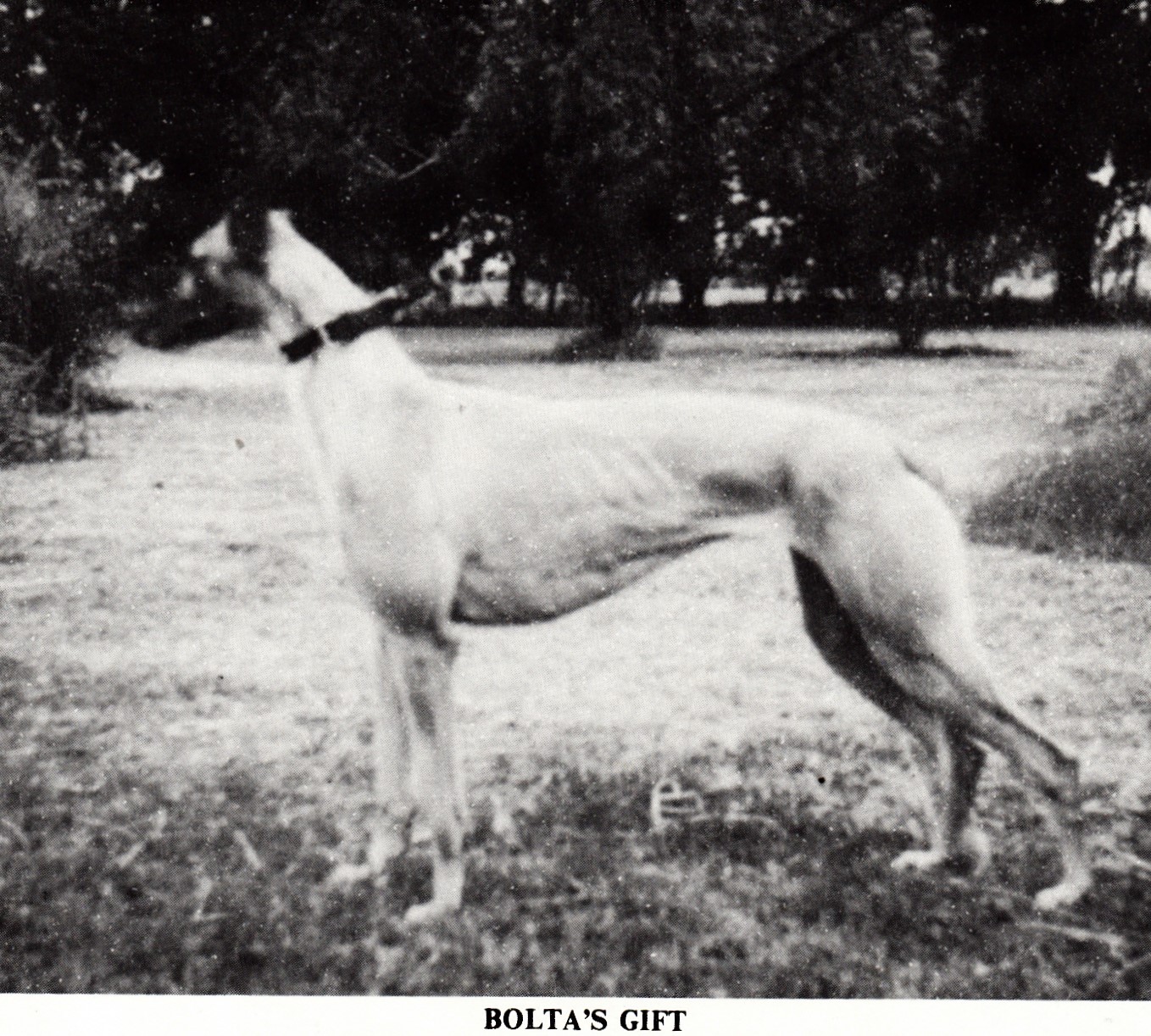 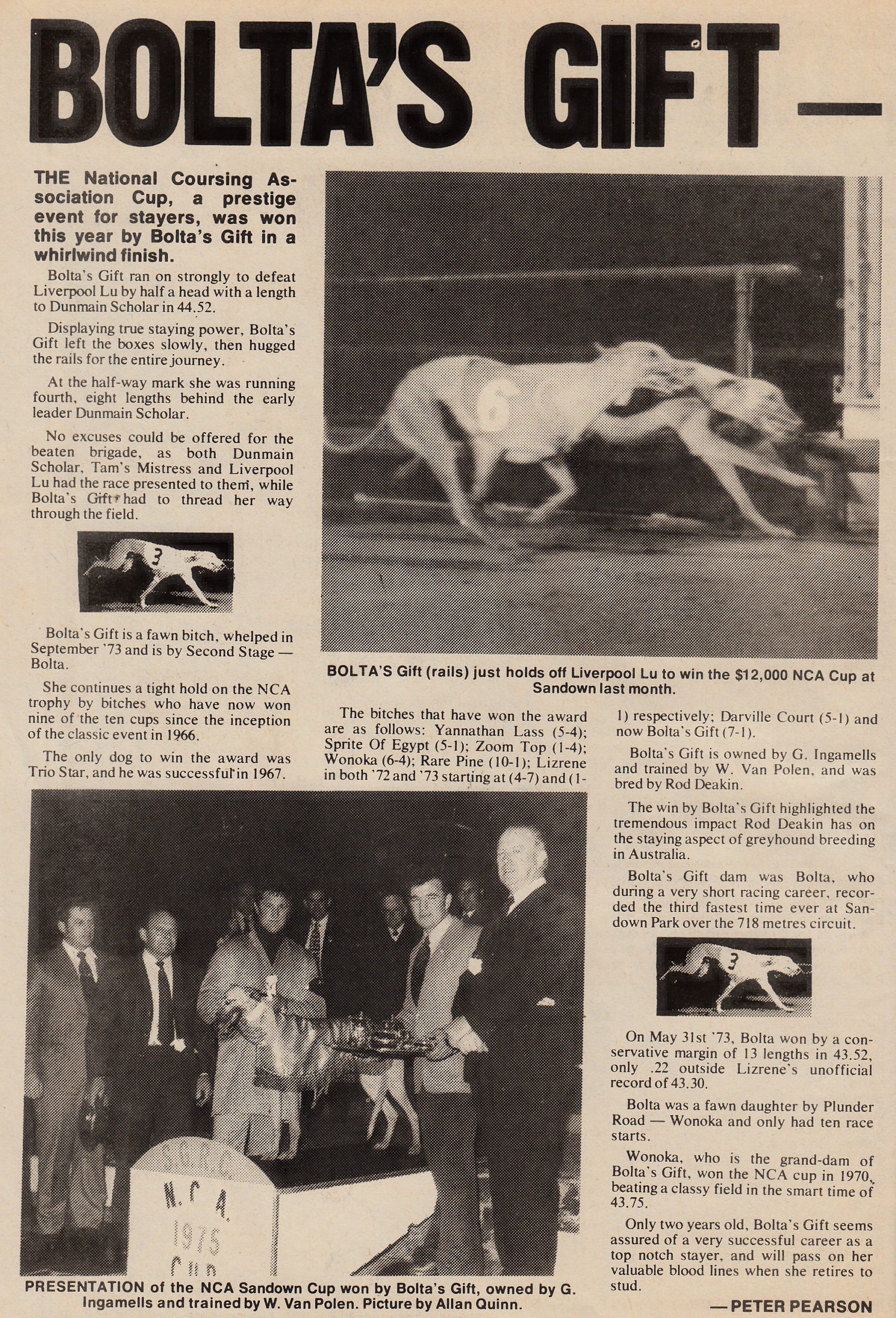 Howard Gray – Graham Ingamells trainer for owner Rod Deakin from memory? Not sure but I have it in in the far recesses of my brain Graham was Joe Hili’s wife Sophie’s brother?
Joe Baldacchino– Howard Gray Actually Howard, Graham owned her and Rod Deakin trained the dog.
Howard Gray– Joe Baldacchino Actually I was a bit confused in my earlier post after thinking about it, Bolta’s Gift was actually bred by Roddy Deakin, owned by Billy Van Polen (Sophie Hili’s brother) and definitely trained by Graham Ingamells. I actually recall t… See more
Joe Baldacchino– What a history Howard. Great memories. My angle was taken from when Graham told me that he owned Boltas Gift when he bought a couple of pups from me.
He still races one of my pups, Busy Time.
I’ve been trying to contact him for the last couple of days but the bugger doesn’t answer his phone 😆.
Joe Baldacchino– Howard Gray Howard. Just rang Graham….he actually answered the phone😆. Put the training question to him. He owned the dog and Billy Van Polten was the official trainer. Graham would step in and take greater interest in the dog’s training routine whenever a big race came on. You should have heard him. It was like he really lit up when talking about the dog. His memory certainly hasn’t dimmed.
Des Dooley– Bill Van Polen was related to Ned Bryant and stepped in as trainer of Franklin Deano when Ned had a car accident prior to the Australian Cup
Shane Flower– Bolta herself smart, pups at 18months, did she race against or in heats for the same race as one of her pups
Howard Gray– Shane Flower Think that might have been her grand dam Wonoka who from memory had a litter of pups before she raced or at least during her racing career?
Shane Flower- Howard Gray that rings a bell Howard, unique effort
Ken Mccann– anyone know who trained dunmain scholar ?
Shane Flower– Ken Mccann hogdson, possibly, dear girl, luska duhg, think I’m on right track ,
Des Dooley– Shane, you are correct. Gordon Hodson came out from England.