Here is an amazing story from the Greyhound Recorder about a dog from the 30’s named Gladstone Boy. Written by the late Jack Woodward who was Editor of the Greyhound Recorder from 1950 until 1975. The 16-page newspaper sold at a cost of three pence back in the 1930s. The approximate decimal equivalent was two cents. Dave Alexander developed the paper through its early years before retiring in 1950.
In 1965 the Greyhound Recorder moved its office up the road to Devonshire Street in Surry Hills. It wasn’t long before the Recorder was on the move again, eight years later transferring its operations to Summer Hill.
The Greyhound Recorder employed a large team of 37 in 1975 to not only produce the weekly publication, which then sold for fifty cents, but also all NSW form guides. There were no computers back then and form guides were typed out onto stencils and printed at the back of the premises by a single-operated one-page printing machine. The last form guide was circulated in 1985.In 1988 the Greyhound Recorder was sold to the National Coursing Association and moved to Lidcombe. This was the first time the paper had not been run by an independent owner. After producing a 16 page paper for 58 years, the Greyhound Recorder increased to 20 pages in 1989 and the growth has continued since. The Recorder has had strong editorial direction since its first edition, commencing with founder Dave Alexander, followed by Jack Woodward, who took over in 1950. Woodward served 25 years in the position and was replaced by Frank Kennedy in 1975.
Kennedy was followed by, in order, Ted Hanson, Barry Crawford, John Mahoney, Rick Chapman, Barry Crawford (returned after leaving), John Mahoney (returned after leaving), Gerard Guthrie, Paul Brownrigg and today’s editor Adam Dobbin.
Jeff Collerson – Was a great man Jack Woodward, he was my mentor when I started covering the greyhounds in 1962 and I’m forever in his debt. He always reckoned Macareena was the best he had seen. 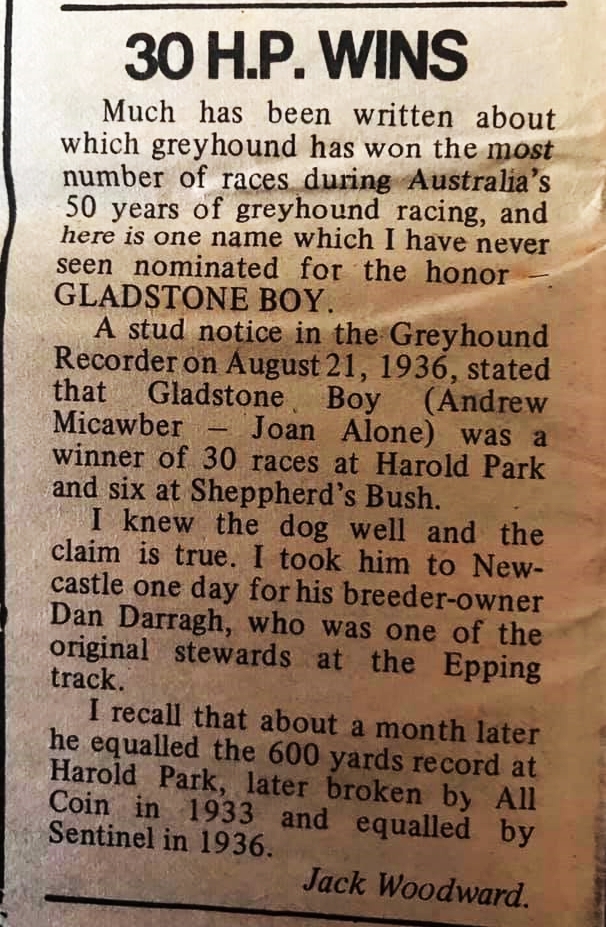