Here is a story about New South Wales Hurdle Fiesta Ben raced in the 70’s won the Olympic Park Hurdle Championship and held the Wentworth Park 530 metre record. Don’t know how he went on the flat interesting rule you could go into a maiden flat race if the dog had only raced over hurdles.

Alan Marum– I’m not sure if lm correct but lm thinking Plunder Road raced over hurdles before he raced on the flat..
Neil Brown – Alan Marum raced on the flat first then Rod put him in the Sandown Hurdle Championship.
Alan Marum – Neil Brown my memory is returning 🤠🇦🇺
Robert Mccurdy – Neil Brown why did he do that Neil
Des Dooley – Plunder Road won the Silver Chief then went over the hurdles.
Alan Marum – I had a dog won a Warragul maiden hurdle by 16len and won a maiden at Albury at a later day…maybe a year later.
Jeff Collerson – Fiesta Ben was owned by Geoff “Pinky” Prenter one of NSW’s leading rugby league journalists at the time and was trained by the late Mick Traino, a champion bloke and very underrated trainer
Neil Brown – Jeff Collerson better amend that to New South Wales hurdler. Thanks Jeff I remember him racing here quite a bit.
Des Dooley – Fiesta Ben was trained by Alan Shine when in Victoria.
Ken Mccann – a champion hurdle trainer 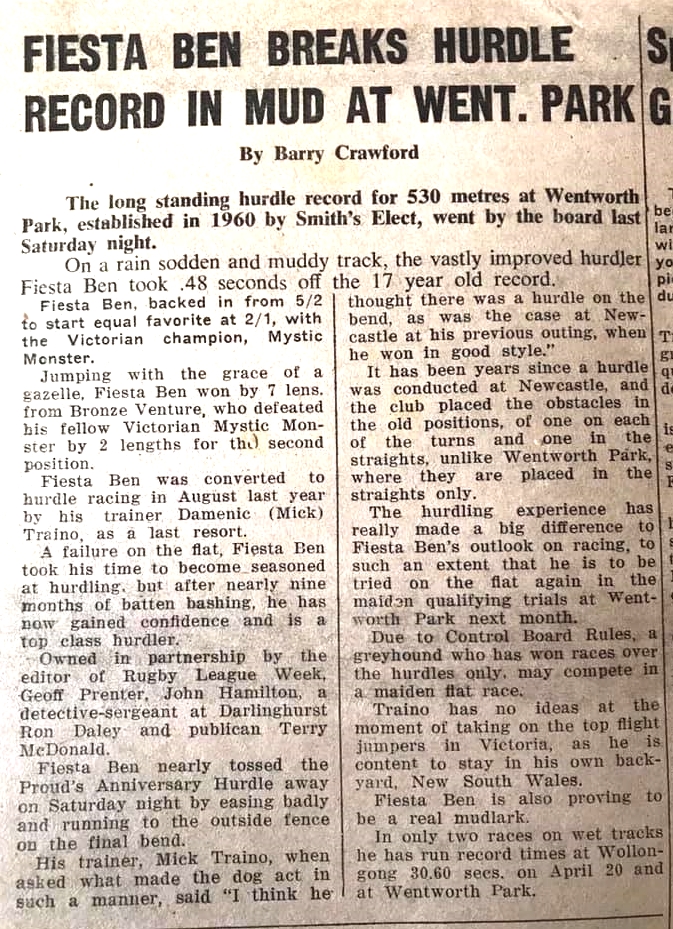