The start of a long running Radio show “Going Greyhounds”. Do you remember the start “Pigeon” 1979.

Greg Hore – I reckon everyone’s radio was tuned in intently on their way to the track. Even had it’s own theme song.
Terry Callen– Greg Hore sure did
Jeff Collerson– Greg Hore The theme song was terrific. Punters are cynical though. One night I interviewed the leading trainer who had 2 favourites in at Harold Park. He said one was better on a tight track and the other was a certainty. Because some people thought he… See more
Terry Callen– Jeff Collerson punters brain
Greg Hore – That’s the theme song 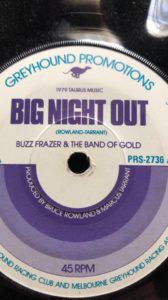 “GREYHOUND 1979 TAURUS PROMOTIONS MUSIC BIG NIGHT OUT (ROWLAND-TARRANT) BUZZ FRAZER & THE BAND OF GOLD PRS-2736 YOLlb TARRAN BY BRUCE ROWLAND & MARCUS UND RACING RACING CLUB AND MELBOURNE GREYHOUND 45 RPM”
Jeff Collerson– Greg Hore Goodonya Hypo. I had a 45 disc of it once, don’t know where it is now though
Greg Hore– Jeff Collerson mine’s a bit out of shape doesn’t play too well.
Jeff Collerson – Greg Hore Buzz Fraser was a one hit wonder I guess’
Gary Mcleod– I loved listening to this on the way to the track
Darren Leeson – Loved it…was that great transition from the gallops into the greys! Never missed it!!
Jeff Holland– great show, is Barry Crawford still with us?
Jeff Collerson– Jeff Holland Last I heard Barry was in Queensland. He got me to write a reference for him as he was seeking a TAB agency. Haven’t heard anything for a few years.
Melinda Finn– One of my favorites!!
June Patton– Remember this well
Adele Powell– Jeff Collerson what about the interview with frank daros
Jeff Collerson– Adele Powell Sure do. Frank who migrated from Italy retained his strong accent. I interviewed Frank about the chances of his dog. When I got to the track my good mate Gary Manning, a big punter, said to me: “Was Frank Daros wrapping that dog or bagging it?”
Adele Powell- i could just imagine Gary lol
Jeff Collerson– That was the late Frank Fraumeni, a kind, gentle guy from 2KY with me and Barry Crawford, Greyhound Recorder editor and a lovely bloke
Neil Brown– Jeff Collerson I never met Frank, but I got to know his daughter when she was going out with Mick Radley. She was a delightful girl, with a beautiful face.
Rob Tyler – Jeff Collerson what about Mamma Lena? Nothing better than listening to her in between the Gosford greyhound calls and Frank coordinating. Memories.
Peter Azzopardi– I used to give an Appin report on going greyhounds
Natina Robert Howard – Jeff don’t look any different today
Jeff Collerson- Natina Robert Howard Thanks for the wrap!