Love this shot from 1932 of the dogs lined up for the final of the September Cup. Some great hats worn by the trainers. 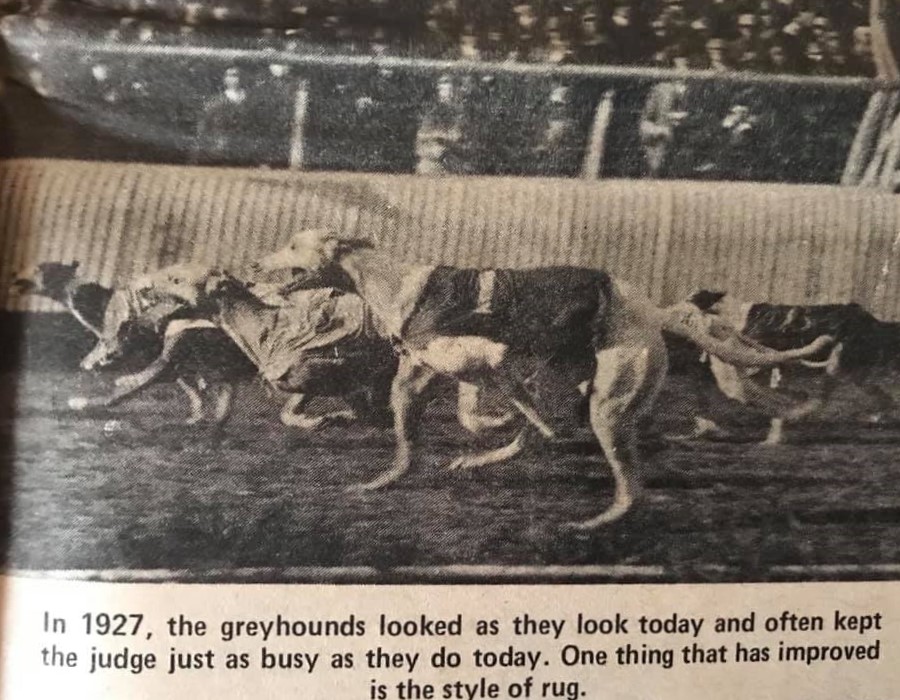 The End of Harold Park: A Look Back At The Halcyon Days Of NSW Greyhound Racing
By Duncan Stearn
On Friday night 10 December a special era ended when the Harold Park harness racing track held its final race meeting. Of course, for greyhound enthusiasts the era had ended 23 years earlier when, on Monday 19 September 1987, the final race for greyhounds was conducted. Nonetheless, the end of Harold Park as a racecourse certainly brought some sadness to this writer as within a few weeks the area will become a construction site for housing and eventually all traces of the track will be physically erased.
For many greyhound people the old Harold Park track remains the perfect example of a great course, offering every animal a genuine chance. As time goes on it’s legend will probably grow, so maybe the time is right to reprise a potted history of the Glebe circuit. Harold Park, originally known as Epping Racecourse and owned by the NSW Trotting Club, had first opened in 1902. On 28 May 1927, a cold Saturday night, it hosted the first greyhound race meeting in Australia under the auspices of the Greyhound Coursing Association (GCA). The GCA was headed by an American with the slightly unfortunate name of Frederick Swindell, who claimed to be a ‘Judge’.
The first race at that inaugural meeting was won by Bellamaud while the final event was taken out by Happy Bachelor, who went on to become the first star of the mechanical coursing era. Lobbying by interest groups such as the cinema industry and then horse racing almost brought the new sport of greyhound racing behind a mechanical lure to an end. Speed coursing, using trained live hares and later pacemakers, was introduced in 1928 but still the anti-greyhound lobbyists tried to have the sport banned by the NSW State government. Certainly, proprietary racing was ended by 1932, but Harold Park continued with the licence granted to the NSW Trotting Club.
From 6 December 1933 until 28 August 1936 greyhound racing was conducted on the harness racing track on a cinders surface over distances of 480 yards (439 metres), 600 yards (548 metres), and 880 yards (804 metres).
On 5 September 1936 a new track was opened with a sandy loam surface. The early 480 yards races were marred by interference and eventually the distance was increased to 500 yards (457 metres). Andilong was the first greyhound to run 27.0 seconds for 500 yards. Late in the 1930’s the 800 yards record stood to the credit of Robert Kent at 44.5 seconds.
In 1948, the NSW government passed legislation approving the re-introduction of night harness racing. This forced the NSW Trotting Club to relinquish its licence which passed to the NSW Greyhound Breeders’, Owners’ and Trainers’ Association (GBOTA). They conducted greyhound racing at Harold Park from 1948, on a new grass surface, until September 1987.
In October 1948 the brilliant China Lady ran 26.5 seconds for 500 yards, a track and world record that stood for almost 10 years. In 1958 the mighty Top Linen lowered this to 26.4 seconds, the same year fields were reduced from 10 to a maximum eight runners. This was equalled by Top Linen’s sensational son Black Top and then, successively, by Baratta, Harem Belle, and Royal Temper before Black Tass scored in 26.3 in 1965. Swanky Beau set a new standard at 26.2 in 1967.
Speed machine The Shoe equalled the record and then, on 23 December the same year, ran an unbelievable 26.0. This new world mark was only equalled once, by Arctic Fire in 1973, and stood for almost 11 years. It was broken by Satan’s Legend who won the 1978 Bi-Annual Classic (now the Peter Mosman Memorial) by seven lengths in 25.95 seconds. Brother Fox lowered this to 25.82 in 1984, the last time the record fell.
Between 1954 and 1985 the 800 yards record fell just six times. Bright Pleasure was hand-timed to run 43.2 seconds in 1954, a time standard that remained unbroken for 14 years. It was Bunyip Bint, a brilliant but erratic brindle bitch, who annexed the record on 30 November 1968 in winning her Summer Cup semi-final by 15 lengths in 43.0 seconds.
A year later, on 8 November 1969 Bunyip Bint downed the great Zoom Top by eight lengths in an incredible 42.7 seconds. She equalled this time three weeks later.
For almost 15 years the closest any greyhounds came to matching Bunyip Bint’s mark were Travel Rev, who ran 42.9 and, in 1973, Victorian champion He’s Some Boy who scored in 42.83. The great staying bitch Miss High Lo twice sped over the course in 42.80 in 1974.
It was left to the ill-fated National Lee to finally break the record in 1982, running 42.69 to take the mark by a mere 1/100th. Shy Julie clipped this to 42.67 in 1984 while Street Wise took the record for the last time, running 42.63 in 1985.
The records are vague as to who won the most races at Harold Park. There was a claim made in a stud advertisement for Gladstone Boy in 1936 that he had won 30 races at Harold Park. Although his career spanned 1932-1936 it is more likely Gladstone Boy won 30 races in his career, and not only at Harold Park. Certainly Zoom Top looks the most likely candidate for the title as she won 20 races, 14 over 800 yards and six over 500 yards, from 39 attempts.
The Ringer won the most sprint events, with 19, while Winifred Bale won 18. Just behind them are Sole Force and Fast Sapphire with 16 sprint wins apiece and Toni’s Comic with 16 successes (from 32 starts) over 732 metres (800 yards).
Other memorable achievers were Shapely Escort with 15 sprint victories from only 21 attempts; Ungwilla Lad with 15 from 26; El Gazelle 14 wins and Smooth Keith also with 14, but from only 15 starts on the track.
Arguably, the greatest stayer ever seen at Harold Park was Travel Rev, who won 12 of 13 starts. He finished second in the other with a broken wrist. Dotie Wilson won 12 of 28 outings, the same as her rival Miss High Lo. Bunyip Bint raced 14 times at Harold Park for eight wins, by an average of 8.4 lengths, but was unplaced in the other six, including four last placings.
At a wild guess I would estimate that about 30,000 races were run at Harold Park in the 60 years it operated as a greyhound track. That alone makes for a lot of memories.