Hurdle racing at Sandown in 1950 is it me or has the five taken off early. Here also is a flat race finish from 1952. Talk about action this clip is why I loved Hurdle racing. Now remember it’s 42 years ago so no it can’t happen now. However, it was accepted as normal in those days. Check out the dog with the red jacket. On Your Way raced into the catching pen like nothing happened to him. I remember Pearl Way was a top-class jumper. The race was on Melbourne Cup night 1979 the caller, the brilliant Peter Donegan. 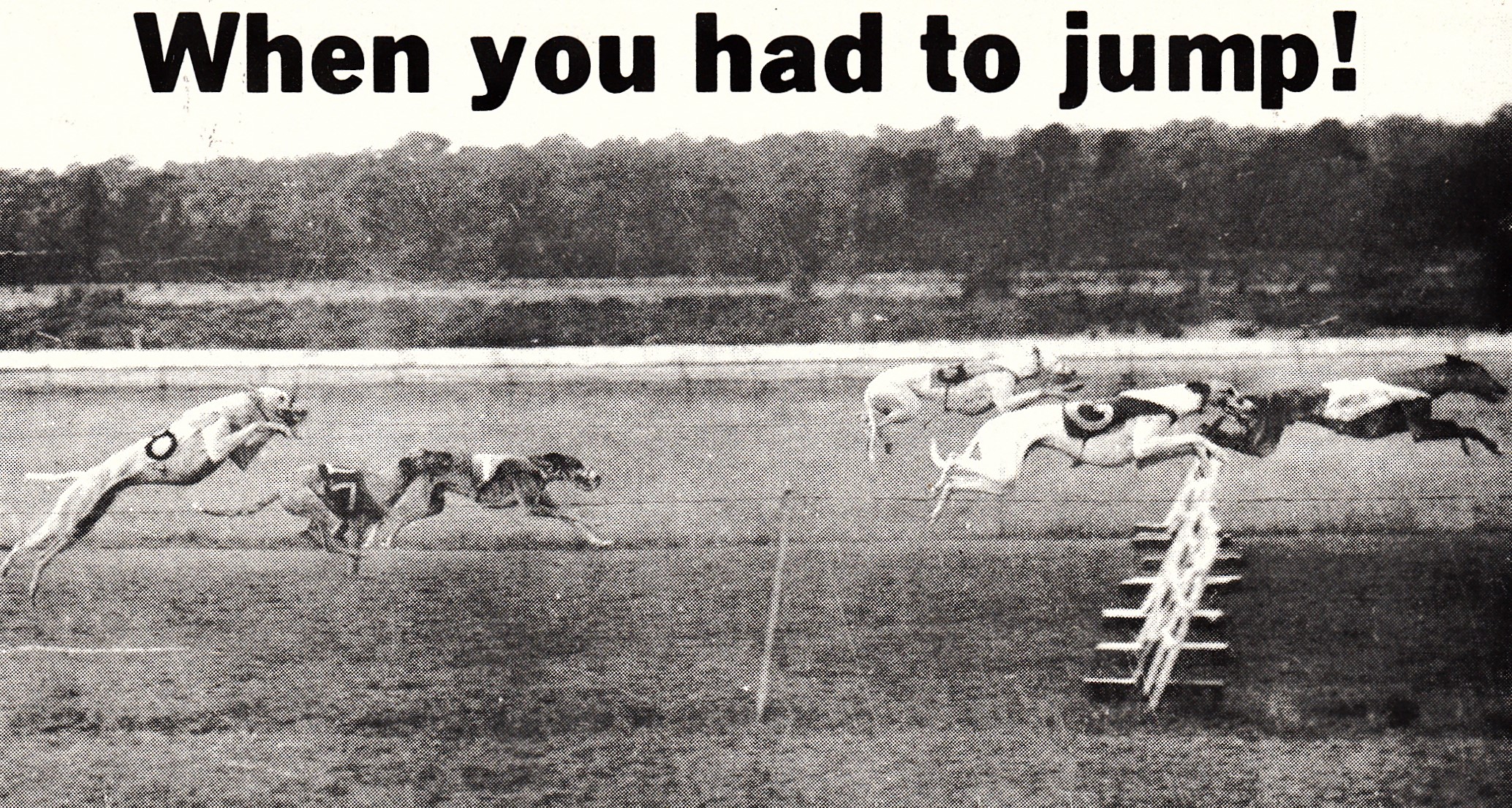 Shane Hookey – What about the crowd at the back and on the home turn !! Pearl way certainty beaten !!

Cory James Hiscock– How about the 5 (yellow) that try’s to jump the catching pen gate as well!

David Curtain– I remember Rhinestone lady falling in the home straight & fell across the finish line in 1 at. Place.

Steve Simmons– David Curtain wow I used to back her all the time,also Sunday Punch and Westernport

Richard Codd– Still on in uk

Cheryl Pirani– Pearl Way was a champion dog. We trained his brother Pearl King he was a great do too, he went to WA & won many races there.

Cheryl Pirani– Kerry Chalker I remember that Kerry! We had good dogs then, LOL !!

Shane Hookey– Cheryl Pirani yes Cheryl I remember Pearl King at Cranbourne as I was the starter for late 70s and all through the 80s,we sent a few dogs to Perth and Adelaide,there was place for most of them ! if they managed to win with the first one you send over,you had a market then.

Susan Jolly– I remember those days! 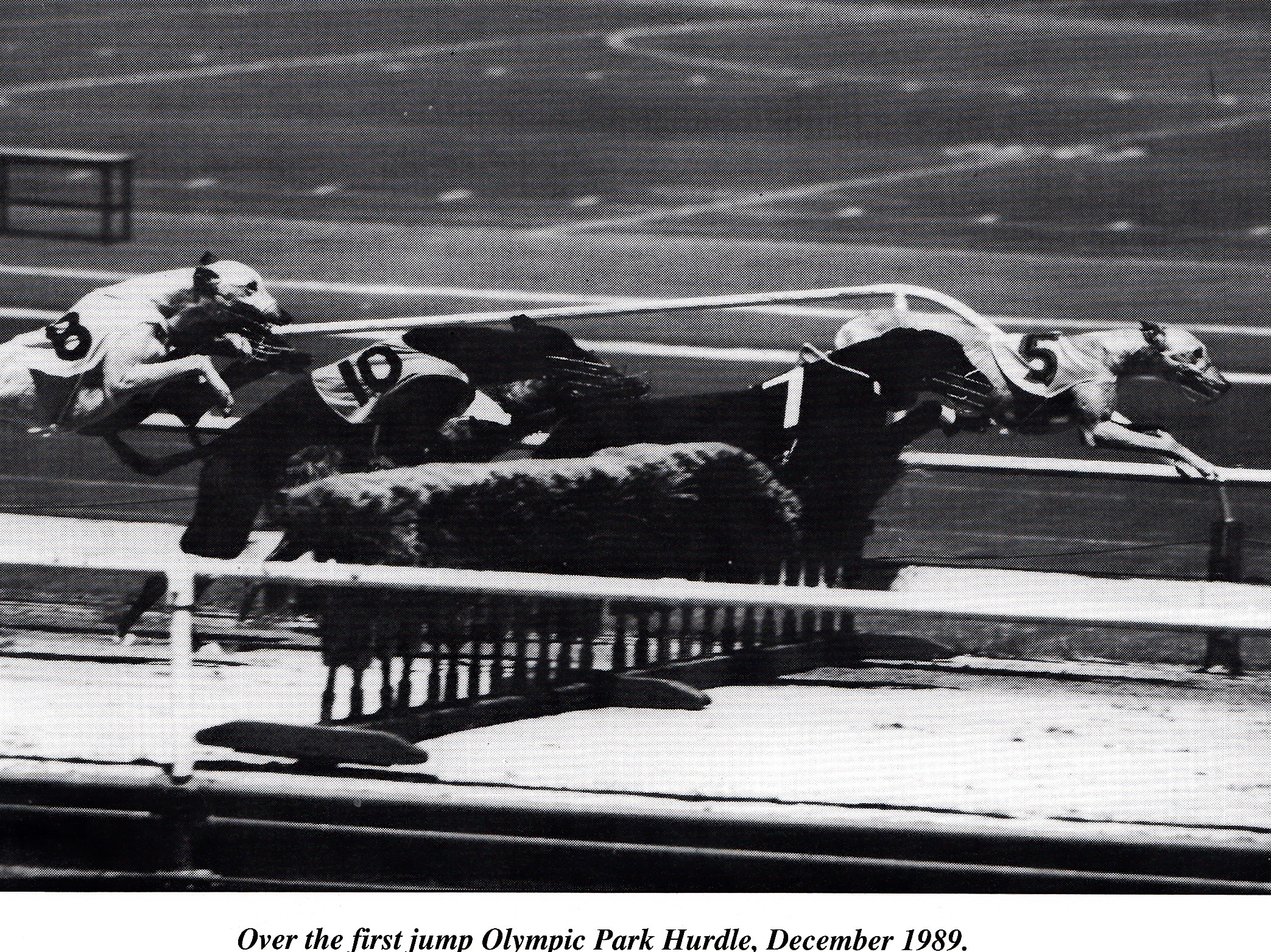 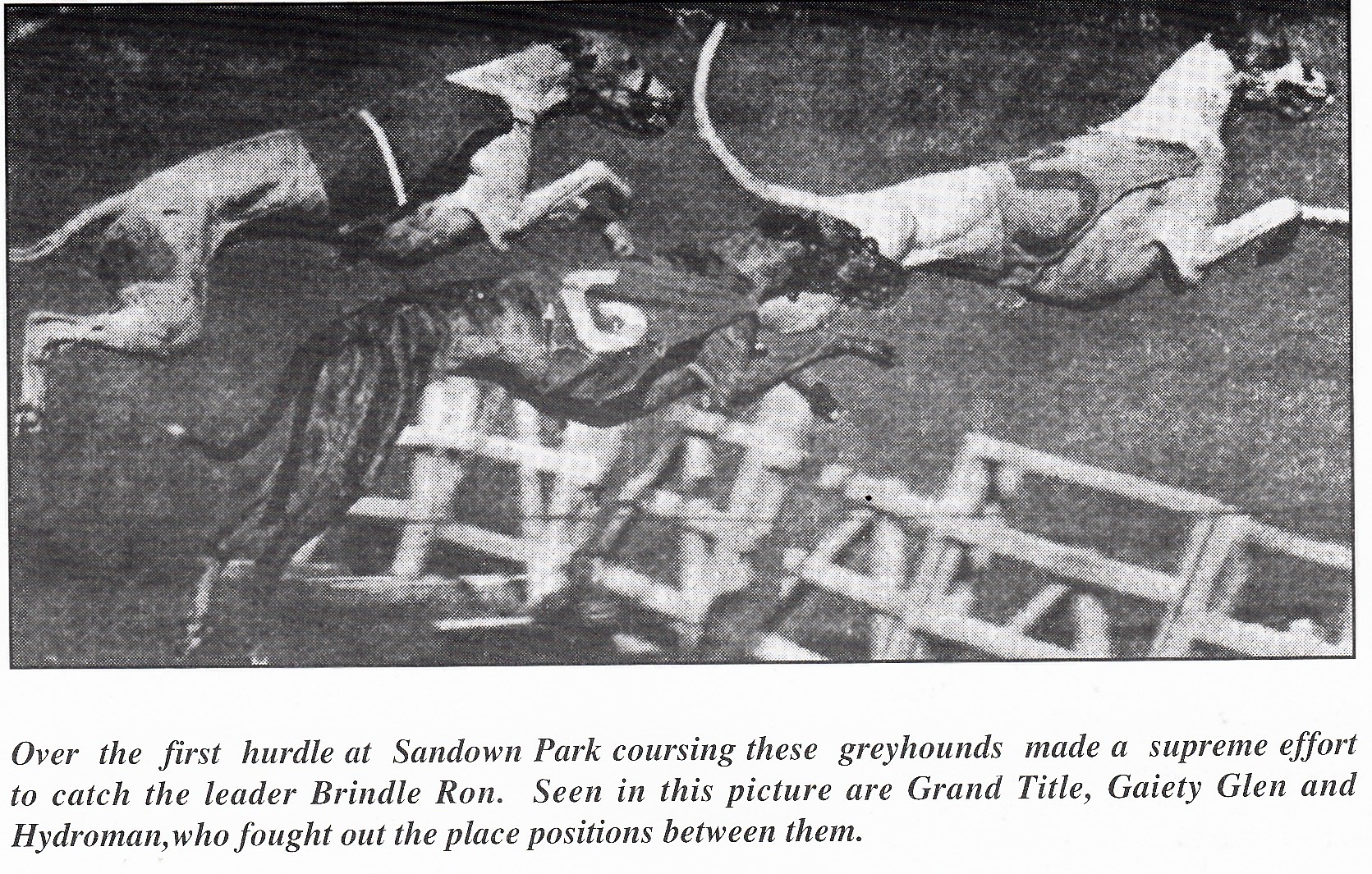 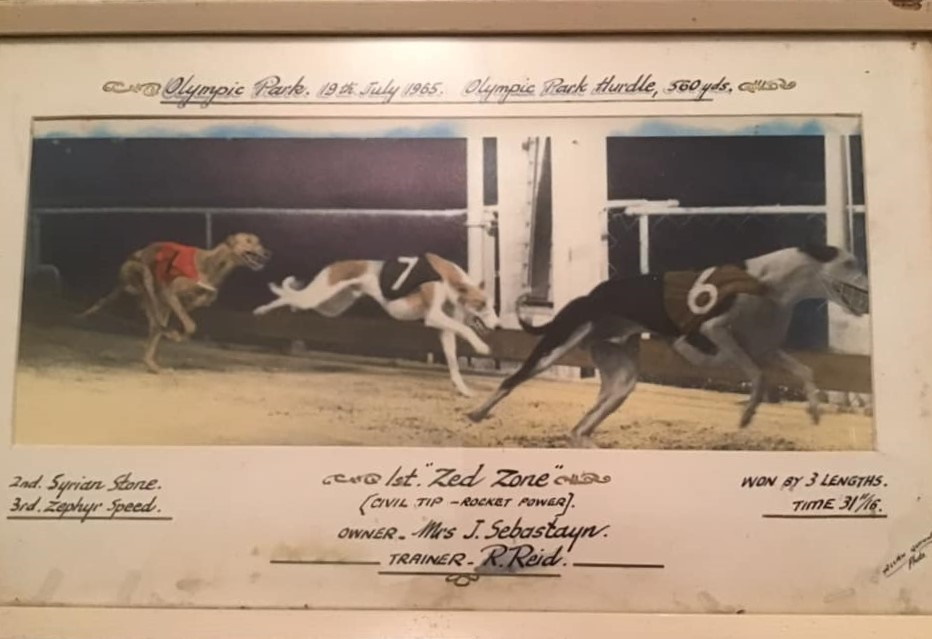 Robert Britton – Dad used to put fighters over hurdles. Certainly made them concentrate

Doug Scott – I saw an elderly lady had her dog at Sandown trials it fought so she said would put it over hurdles to my amazement she did that night it nearly fell at every hurdle the next week it was in a hurdle race I said to Horrie Tomamichel it couldn’t win it did and won 8 in a row his name was Mast a 90lb brindle dog.

Ken McCann– alan shine was one of the top jumps men in vic
Kerry Chalker– Ken Mccann Billy Harvey also
Wendy Sebastyan- The downfall of hurdling was the fighters. They either went coursing or hurdling. But there was nothing better to watch than quality hurdlers, loved it.
Wendy Sebastyan– May be an image of dog
Jean Bennett– Wendy Sebastyan Yes Wendy BUT that was in your era the dogs like Zorro and the other hurdlers back in the early days WERE NOT FIGHTERS NEITHER WERE THE EARLY COURSING DOGS THEY WERE SPECIALISTS Chosen for their ability to perform in those events Top… See more
June Patton– Being a Victorian you probably don’t know a nsw greyhound called ranuity lane crowned Queen of bulli Geoff knows her well
Jeff Collerson– June Patton What a star Ranuity Lane was. I was a regular at Bulli in those days when Jim was leading trainer and president and Billy McGrath was the steward while Winston Harrow was one of the big bookies there. Another terrific dog of Jim Patton’s s was a big 78lb sprinter called Away Out, also Blazing Pride who was inclined to be savage. I went to pat him one day and Jimmy pulled my hand away in the nick of time.
Shane Flower– I agree Neil, even trial night at Olympic, was spectacular, to have a champ giving a up and comer a few metres start then watching his jumping ability pulling back the margin, loved it, champion sprinters, stayers, hurdlers l hold with the same hold with the same esteem, a champ is a champ.
Jeff Collerson– The late Mickey Traino prepared a champion hurdler called Fiesta Ben for a host of media people headed by Geoff “Pinky” Prenter, editor of Rugby League Week and Daily Telegraph football and tennis writer
Jim Lee– No jumping lure required with Bramich, we just shortened the inside broom about the only time it was a success. The lure that is!
Howard Gray– Jim Lee And so say the all of us…like a well known trainer once said to me..”A Holden motor driven cable lure would pull the ass out of a Mack truck…the Bramich lure wouldn’t pull the ass out of a rag doll”. Never was a truer word spoken.
Jean Bennett– My Champion hurdle ZED ZONE was as good as you get was funny tho in1963he was winning every thing at WATERLOO CORNER the top grade sprint and hurdle the same day When Top Vic trainer Roy Ried asked us to send him over to him He must have had a granny … See more
Jean Bennett– Neil Brown Hello Neil Wendy is the curator of the photos now glad she posted it do pleased she did Love this site great to see that a fee of us antique trainers are still around Wow some great memories popping up
Simone Wilson– I remember being at Olympic Park upstairs for the Greyhound of the Year awards, the year Diama Blue won it, a hurdler.
Cory James Hiscock– As a young fella it was the highlight of any trip to Olympic Park for me. I’d stand by the fence near the driving tower and wonder at the broom hurdles being put out as the track was brushed and Tom McPherson change the lure arm over. He’d get the oil can out and tell me how important it was that the jumping lure came back down.
The occasional laugh as a handler slipped over giving their charge a look at the first hurdle on a wet night.
And too this day, the jumping lure arm is still sitting in the workshop at The Meadows. I’ll never throw it out, too many good memories.
Graeme Marchant– How good would it be to bring this back into greyhound racing? 🤔
Neil Brown– Graeme Marchant welfare department would have a heart attack. Pity we are not meeting tonight Graeme I had quite a show planned.
Ian Hilditch– Neil Brown yes but they don’t seem to have an issue with domestic dogs doing agility and jumping competitions.
Neil Brown– Great point Ian.
Troy Harley- Ian Hilditch big night at Beaumont Park Ian when Sobriety beat Diamablue – 1993?
Graeme Marchant– Neil Brown I know, I heard.
Keith told me. Look forward to catching up with you when your at our next dinner. Cheers!
Des Dooley – Sobriety’s trainer, Rick Andrew did know how to place his greyhounds to advantage.
Richard Codd- Still going strong in the uk
Alvin Jones– What about the handicap races over the hurdles very exciting
Gail Hobbs– Loved the hurdle racing so awesome
Peter Maher– I remember those days! at Beaumont park when I was a kid
Jim Lee– Gawler GRC were instrumental in getting some hurdle races happening in the late 80’s, Colin Lyons and myself had some fun building them and putting the races on, we took the hurdles to Srathalbyn, Barmerra,Pt Pirie. Angle Park. Well received by all especially at the provincial tracks.

May be an image of 13 people and people standing. 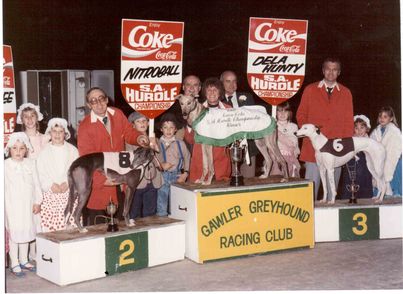 Des Dooley -I remember a bitch at Warragul in the early 70’s called Royal Honey. She used to take off well back and skim across the top.
James White – Besides the betting factor, you can see one of the reasons why they finished. Never improved on the upside down brooms. Not very forgiving if they made a jumping error.
A combination of foam rubber and the English hinged style hurdle, may have done the trick. But we’ll never know now. Hurdle racing has been removed from the Rules of Racing.