We sadly recently lost highly respected and much-loved Greyhound man Brian Kutner. His son mentioned his dad had originally built and operated a complex in Thompson’s Road Carrum Downs a Melbourne suburb in the Southeast. It was later called Azzopardi’s, Leigh Smith and his father also looked after the straight. Then it was run for many many, years by retired School teacher Brian Murphy and his sons. I spent most of my training days down at the complex at least twice a week. Great straight track.

Howard Gray – Now there’s a real character Vic Azzopardi, I remember going to his track as a young fella with Leo Pickard when we took Braentra Belle over to be served by Newmore King. I bought 2 stainless steel feed bowls from Vic’s on site shop and I still have those 2 feed bowls to this day.
Leigh Smith– Dad and myself had the straight when it was grass. We bought it of brian cutner. Had some champion dogs and trainers up there. Broke a pretty good dog called Zulu moss trained by bill leckie. Good old days then.i think about 1973.
Neil Brown– Leigh Smith I remember Brian moved to the Gold Coast we would see him at the Galaxy each year. Good mate of G Bate’s.
Gary Smith– Went there many times, yes was a great straight

Sue Jolly – Spent many an early Sunday morning trialling dogs there.
Peter Macleod – Great circle track azzoparrdi’s, brings back memories
Alan Marum – Memories🤠
Anne Gent – Alan Marum Yes many memories, we had schnappers track in brunnings rd for a while. Murphy’s was just behind us. Very busy days and nights those years.
Alan Marum – Anne Gent l had schnappers for 5 years before l went to lara
Anne Gent – Alan, I didn;t know that.
Ray Hawkes – Anne Gent And that was a great track for broken young pups in in that heavy sand love that track always used to trial There with my younger dogs
Anne Gent – Ray Hawkes Yes sand good for youngsters.
Ronald Lyfield – good old days 😌
Anne Gent – Ronald Lyfield Yes Ron, they were great old days.
Ronald Lyfield – Anne Gent sure were Anne
Jenny Roberts – Met Greg Murphy and his motor bike returning from Queensland 6 weeks ago, in a service station, big blast from the past
Matthew Clark – $1.20 racing beef! Those were the days!! Shame it’s not around still. It was like no other!
Shane Hookey – Circle track had the Bramich, electric lure,like Sandown,I drove it for a few years,Slick Oleary fastest dog to the tower 320 mt, that I clocked,Vic Azzopardi,employed all us young blokes,his son Frank,Wayne Terry,Roger Baumgartner,myself and Greg Bennett trained Vic’s dogs
Leigh Smith – It was a grass track. We ran it around 1972 onwards. Had some champions run up there. We broke zulu moss in up the straight, for bill leckie.
Shane Hookey – Leigh Smith yeh Leigh,was a choice of Fred Booths or Carrum Downs for grass straight tracks,with Ted Demmlers trotting stables by the boxes,the mighty Pure Steel could be seen going around,with owner Russel Roberts driving him !!
Steve Shinners – Great memories
Stephen Toner – Sadly we don’t have a few set ups like this anymore. Major problem in Victoria!
Shane Gordon – Great times 1 stop shopping
Cheryl Pirani – Great straight track. we need a breaking in track badly now for pups. Pity they got rid of Tooradin. I’m sure that’s why so many dogs dont chase now, because they are being broken in on race tracks.
Ray Hawkes – Cheryl Pirani You are Right and I think it is because of the way the Stewart or the Greyhound Bored have made it about giving the dogs a fair go when they are broken in
Benny Briffa – It was great going there trialling up the straight breaking in pups on the circle good staff 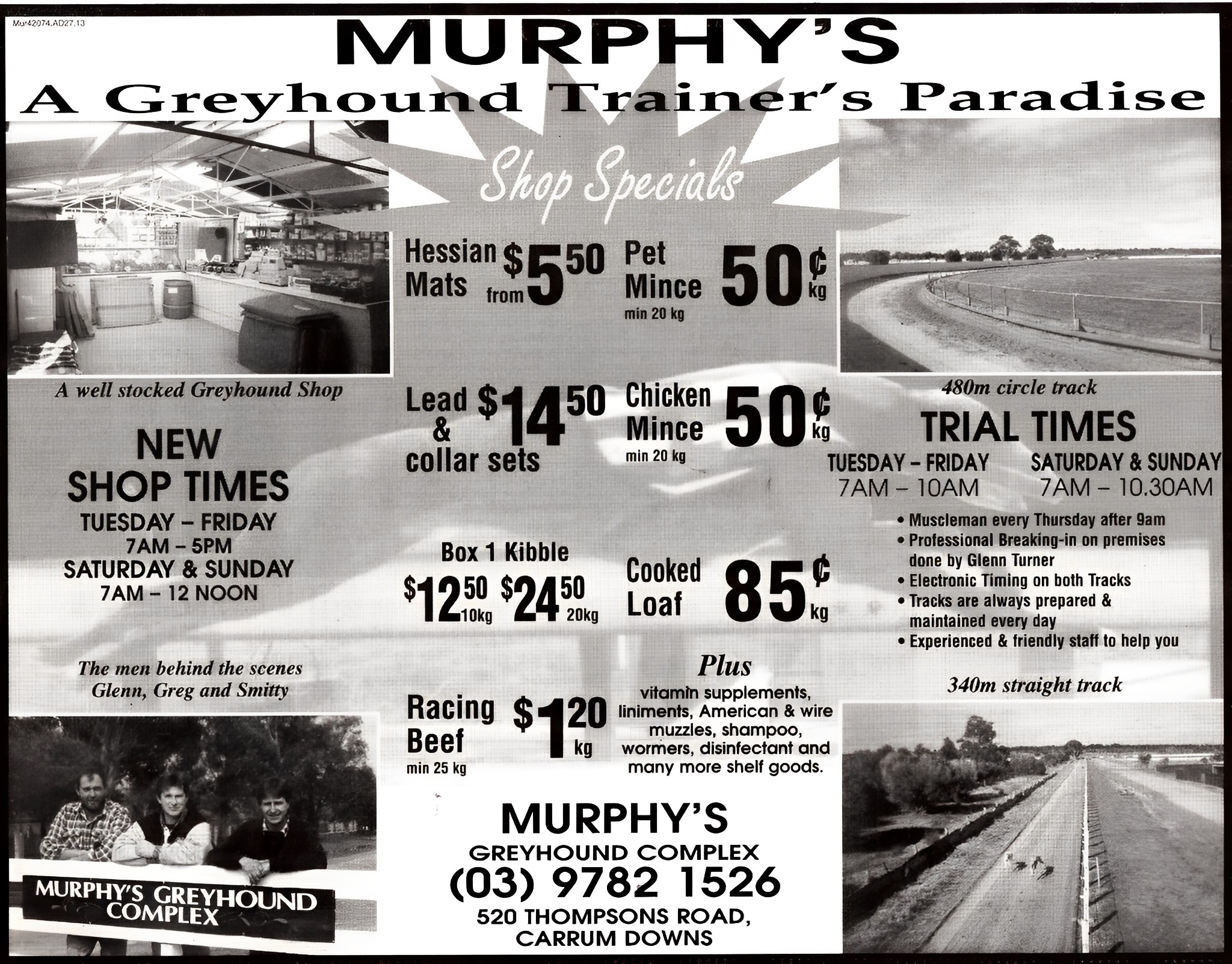