Interesting book I found I didn’t pay a Shilling for it I probably saved it from being thrown out. I am sure the Narracoorte Herald was a must read.

Howard Gray – Must have changed the spelling of Naracoorte in more recent times? 😀 One of the very best coursing trainers from the SA’s South-East during my early introduction to live hare coursing was Colin Sims from Carpenter’s Rocks, I think another very good trainer of coursing dogs Drew McFarlane was from the South East as well. Jean Bennett might be able to help me out there?
Shane Flower – Dads, cyclone Suzuki, won the sa wareloo cup at 18 months, went back next year beaten half a piont, by Kojak out of a sister to saki dasher, won her one and only arm race at 5an a half years of age at Traralgon, tr eric and will honeyman
John Vivian – Newman McDonald was coursing in the SE Neil Penley trained for him
Howard Gray -John Vivian Wooberra & Mawarra Boy (Black Top x Tamerine) 2 of the best track dogs Neil trained. Owned by his Uncle and Auntie Ernie and Elsie Mobbs the breeders of so many outstanding racers from their mighty broodie Tamerine, mostly trained by supreme conditioner and Greyhound Racing legend Stan Cleverly…Millimsimbi, Little John maybe the best of so many top hounds she produced. 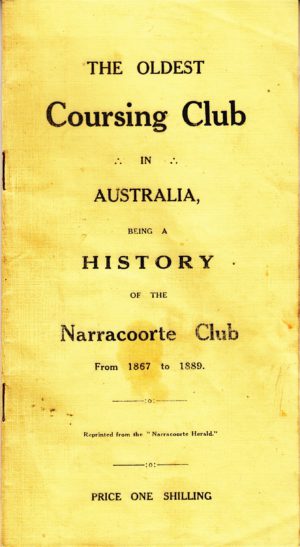