This is an interesting story about a greyhound named Rosebank Boy. Yolanda Lockyer wrote to me after she checked the GCA 1945 results page to reveal Rosebank Boy raced by her grandfather Richard Hicks had indeed won the NCA Stake at Harold Park but no owner or trainer was listed or race details. Alan Capper compiled the GCA results from 1927 to 1972 and did an extraordinary job given what he might have had to work with. As I explained to Yolanda records from that time are as scarce as hen’s teeth. Owner Richard Hicks was born in July 1906 and passed away in August 2000 (Aged 94). His place of birth was Lismore, New South Wales and he worked his Banana Farm near Minyon NSW. He not only raced Greyhounds but was interested in Horse Racing, Andalusian Poultry (breeding and showing) and Blue Mountain Parrot (breeder), Athletics- competitive runner and was a Competitive Axeman/Wood Chopper in Queensland, participating into his 70’s in competition in SE Qld and Northern NSW. Arthur Hicks, father of Richard Hicks also purchased a puppy from the same litter. He selected the best looking dog from the litter. Rosebank Boy was not the prize pick of the litter however he became the prize champion.

The litter of pups were born in Rosebank NSW. Thus, the greyhound was named Rosebank Boy. His litter December 1941 by Gay Hero from Wee Bon consisted of three pups, his brother was named Lucky Hero and a brindle Bitch was never named. Richard never saw his dog whose kennel name “Wally”, race and listened to every start on the Wireless. Richard sent Rosebank Boy to Granville trainer Jim Goodwin and they corresponded by letter. Richard continued to own and race greyhounds into the late 1980’s. Even though his joy for the sport continued, his persistence did not pay off, as there was never another Rosebank Boy.

Rosebank Boy did not return to owner Richard Hicks; it was decided he was to be kept by Jim Goodwin who stood him at stud. At the centre of the story is the NCA Stake which I believe to be the first Match Race ever held. It took place at Harold Park over 500 yards on Saturday afternoon August 11, 1945, in front of 7000 cheering fans. A 1000-pound side wager race was scheduled between champs Terracena and Nimble Rocca. However Nimble Rocca was a last-minute scratching due to injury and there seemed to be some question around the 1000-pound side wager. Particularly when the race went ahead with a first prize of 50 pound. The club called on the unsung hero Rosebank Boy to take his place. Given no chance and starting 5/4 with Terracena 4/7. “Wally” came into the race after equalling Nimble Rocca’s Harold Park 750-yard track record, recording 41 3-5ths at the previous meeting. As the reports show Rosebank Boy unusually beginning well, he led, was joined then cut off Terracena at the turn racing away to win by 5 lengths. He ran 27 and 1-10th only one fifth outside the 500 yards record. Yolanda of East Lindfield had to visit her cousin in Queensland to retrieve the scrapbook and painstakingly scanned a mountain of photo’s, press clippings, stud notices, letters and information pertaining to the story. I would like to publicly thank her for her efforts in bringing an amazing historical archive to light, for all greyhound fans to share for all time’s sake. I also need to acknowledge the “Hicks” family regarding the information supplied as well. A number played a part in keeping this material is such good order for over 77 years. So, thank you to Richard Hick’s children and grandchildren. Interesting points races contained 10 runners and box draws were held at the meeting. You will notice Rosebank Boy was one the red but came from box three. What about the number of Bookmakers field that day. Rosebank Boy had a very successful stud career which I will elaborate on in another post. The pic of Rosebank Boy winning in the nine rug he is defeating Nimble Rocca second with Terracena finishing fourth. There also is a pic of Richard Hicks with his wife Edna. 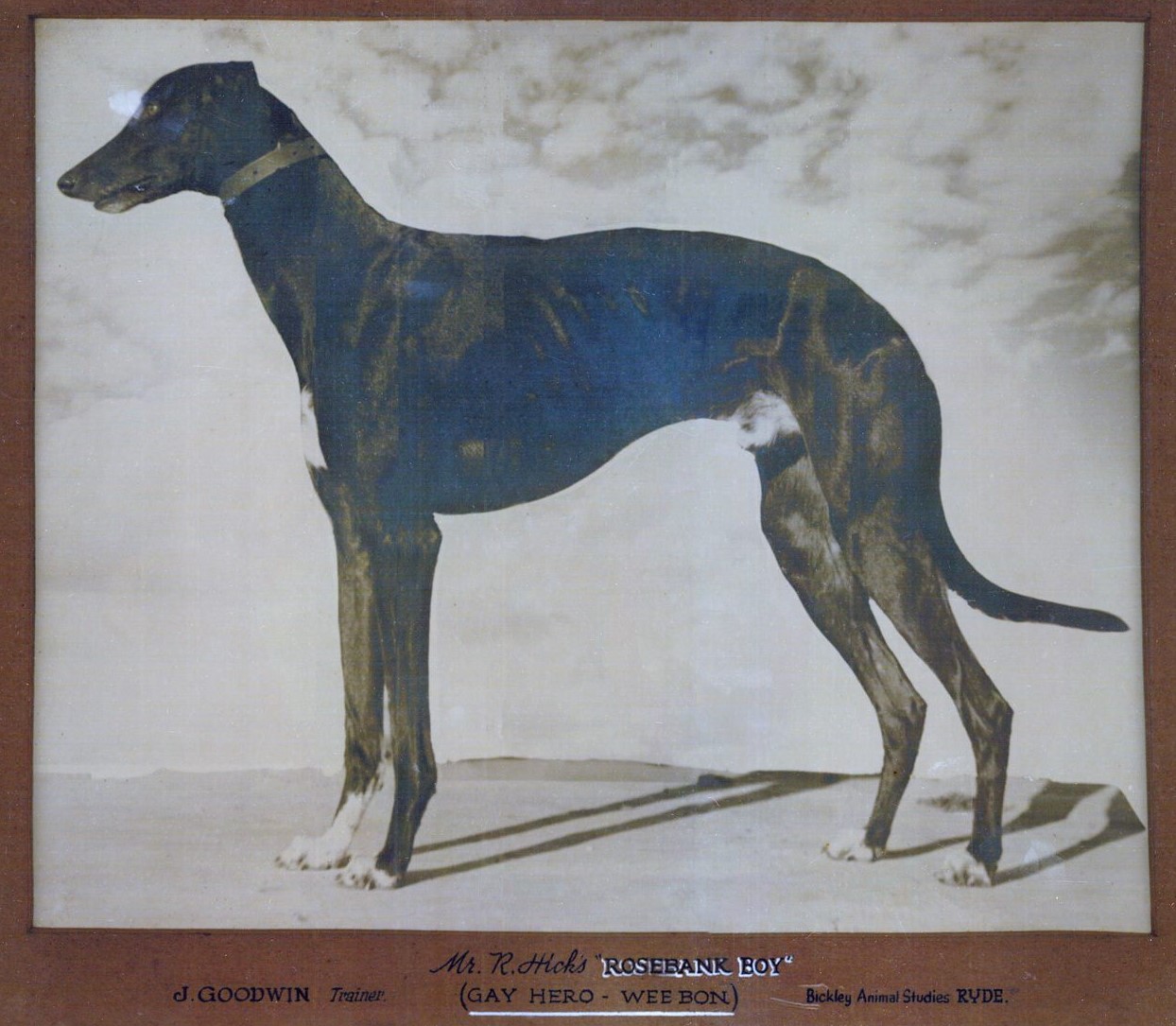 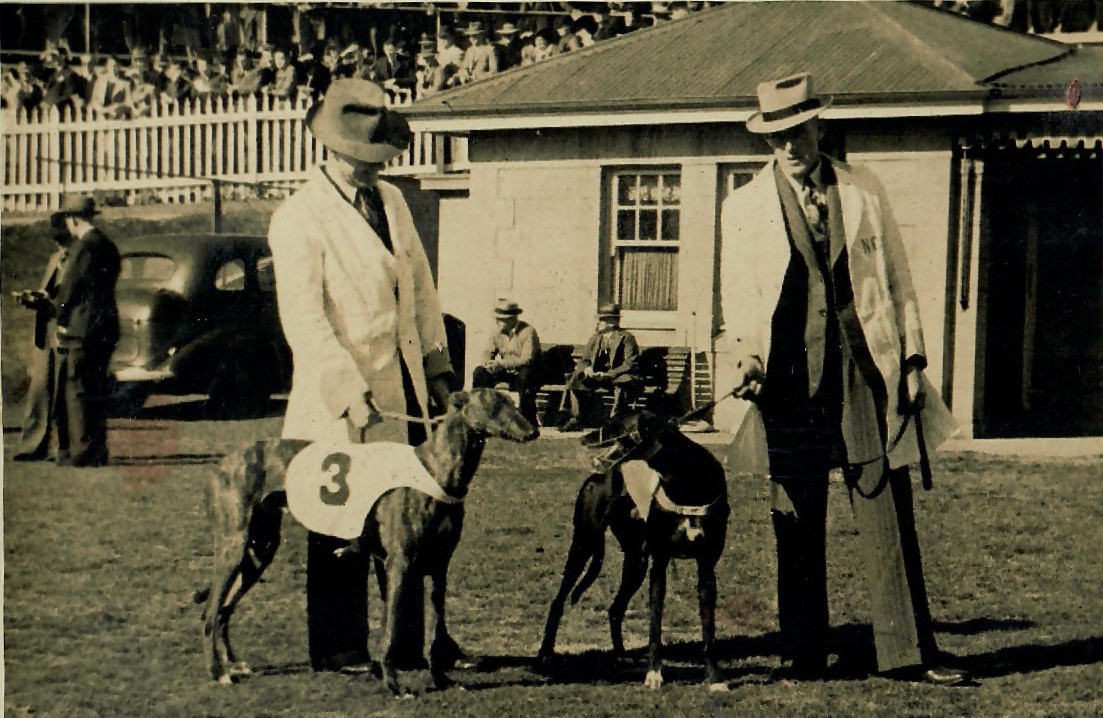 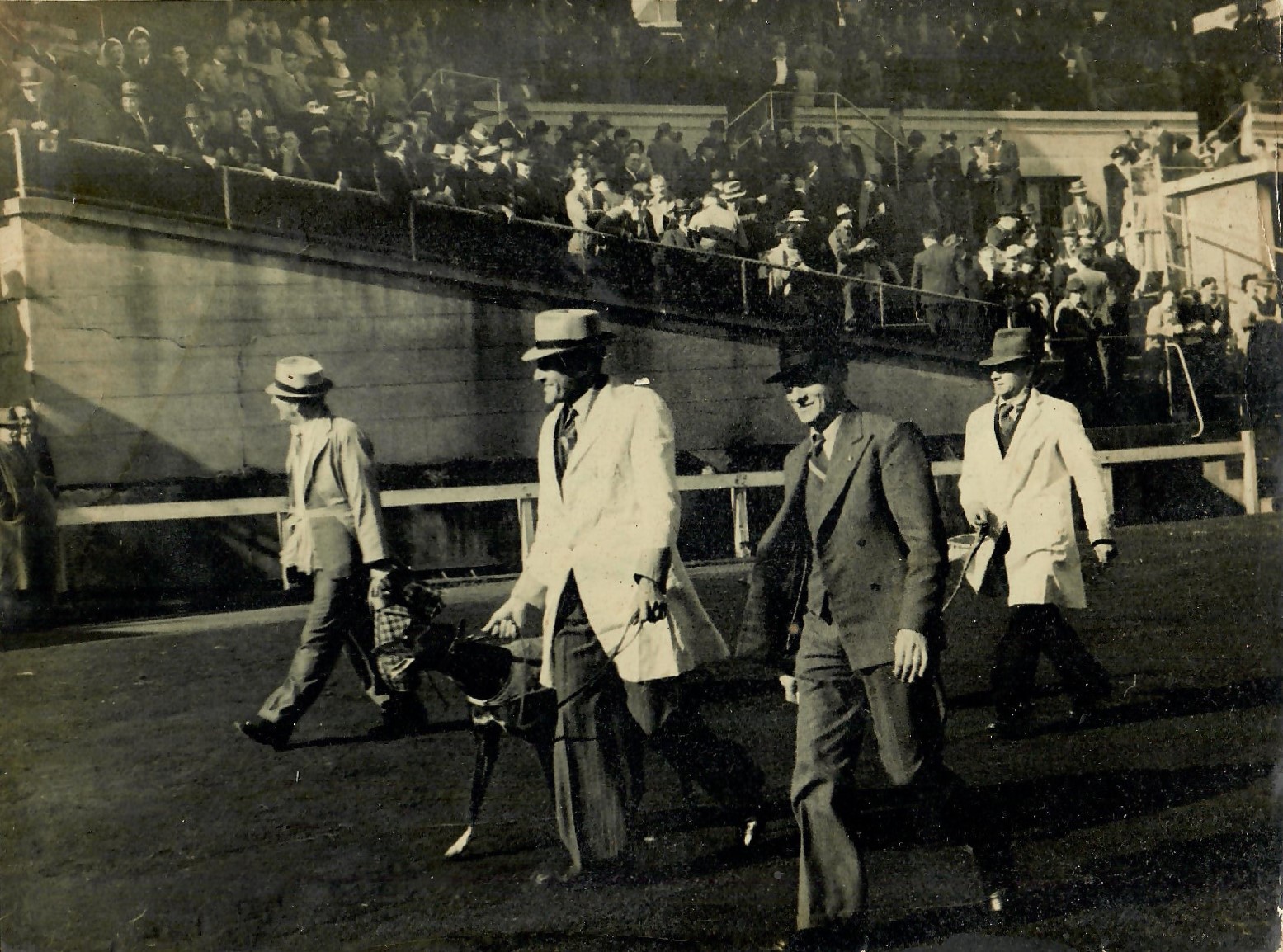 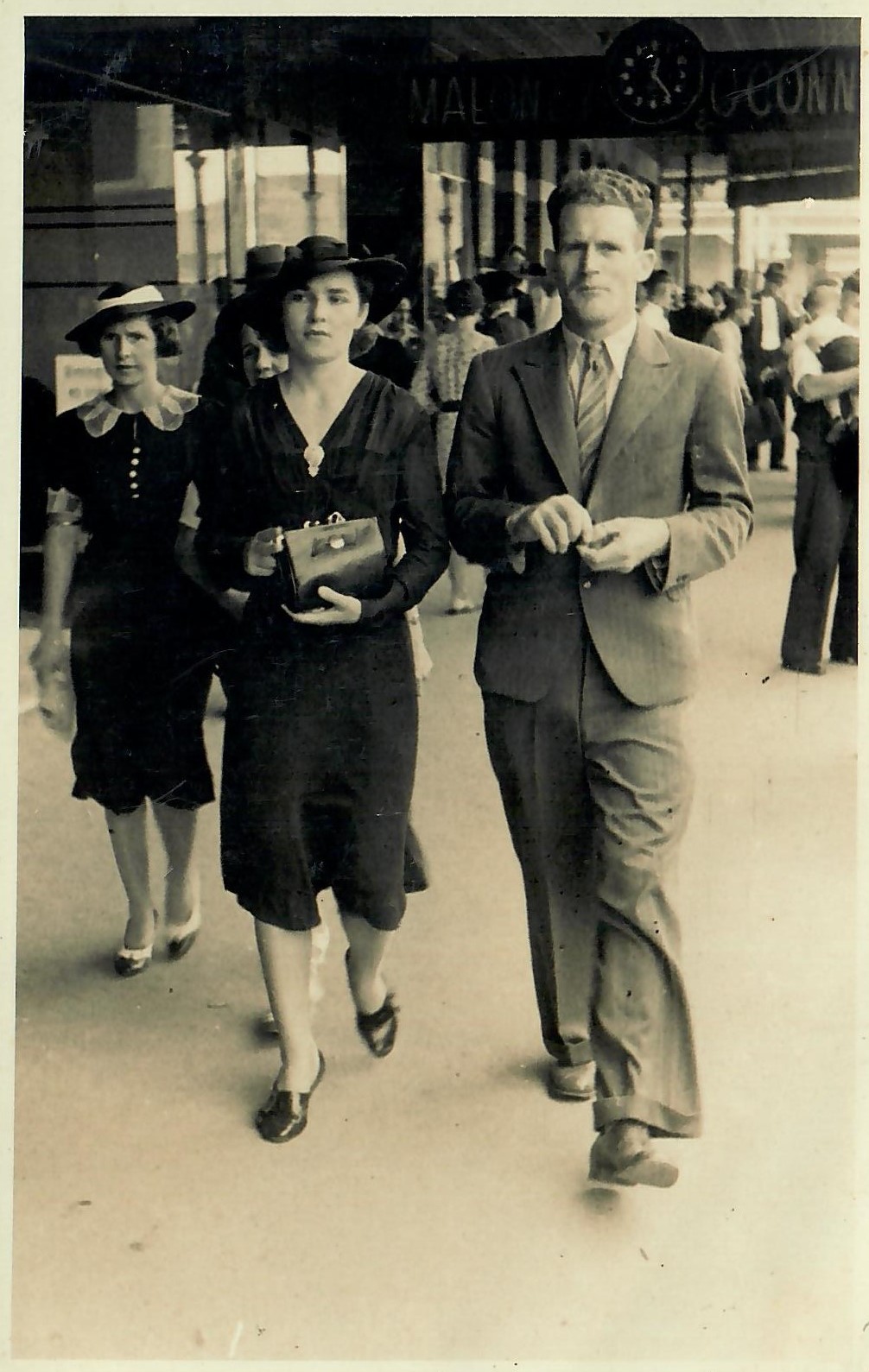 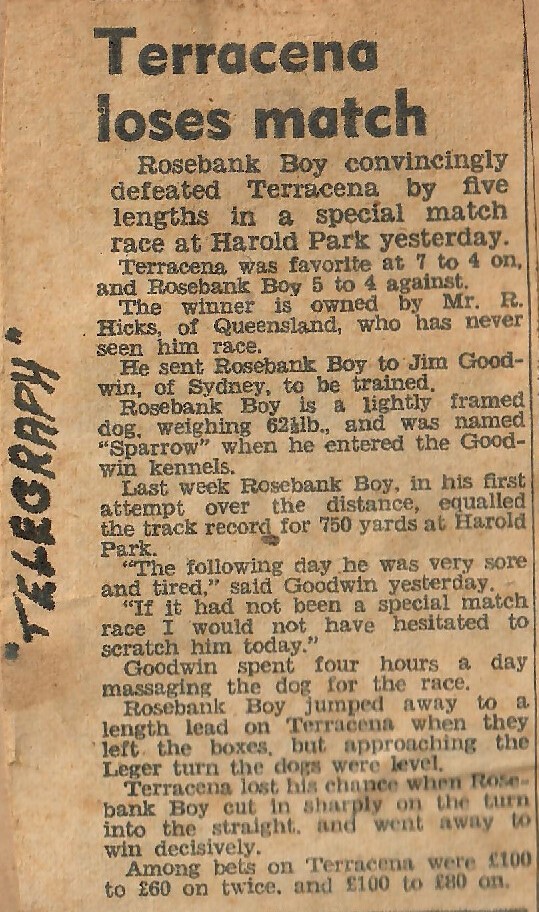 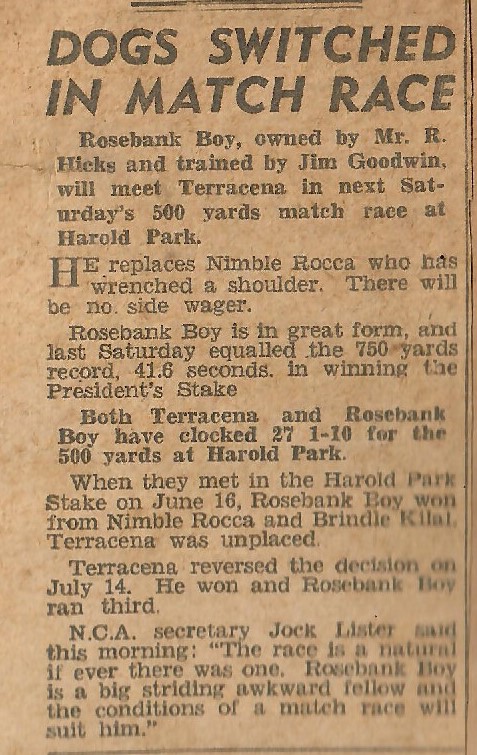 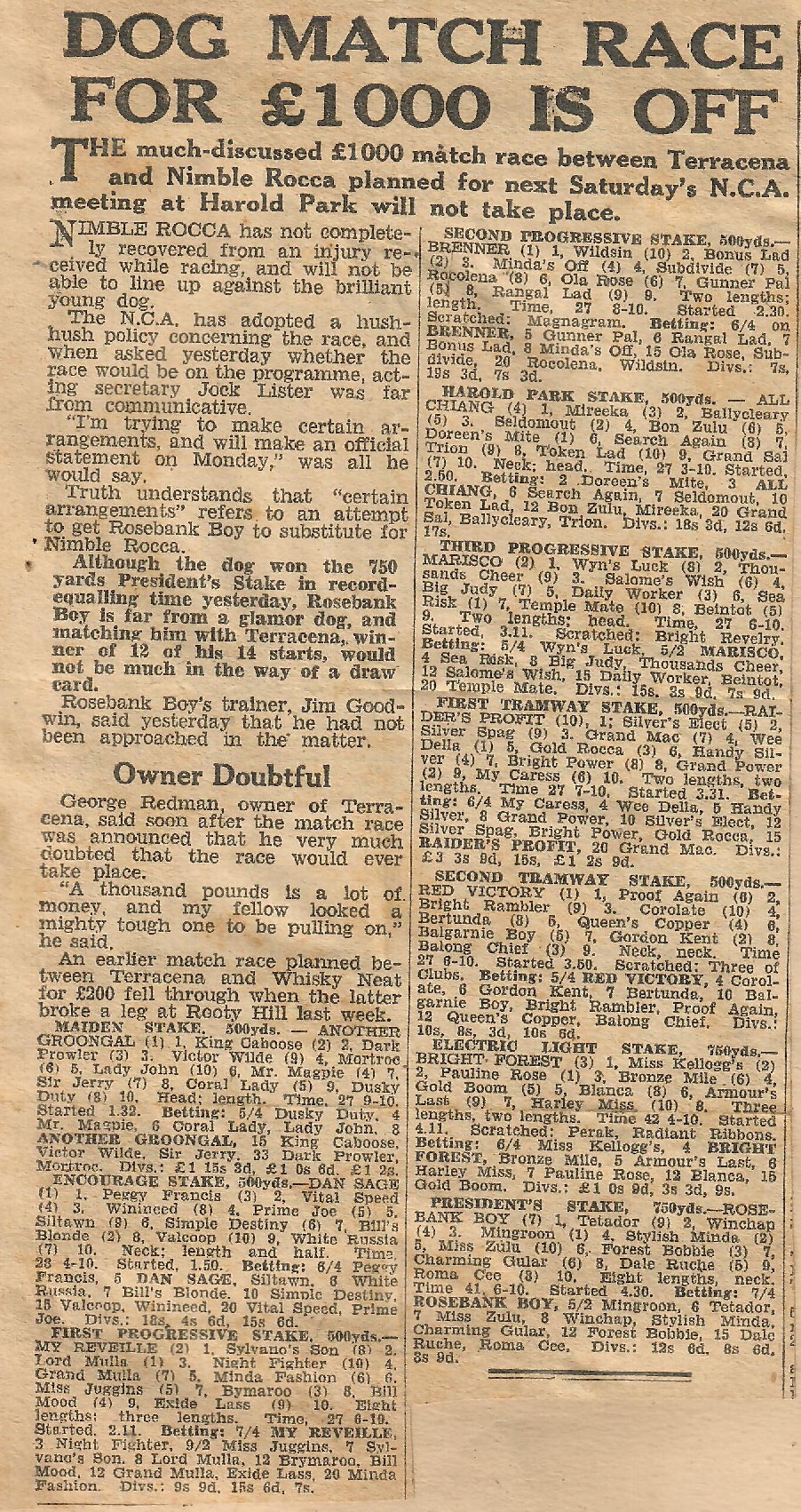 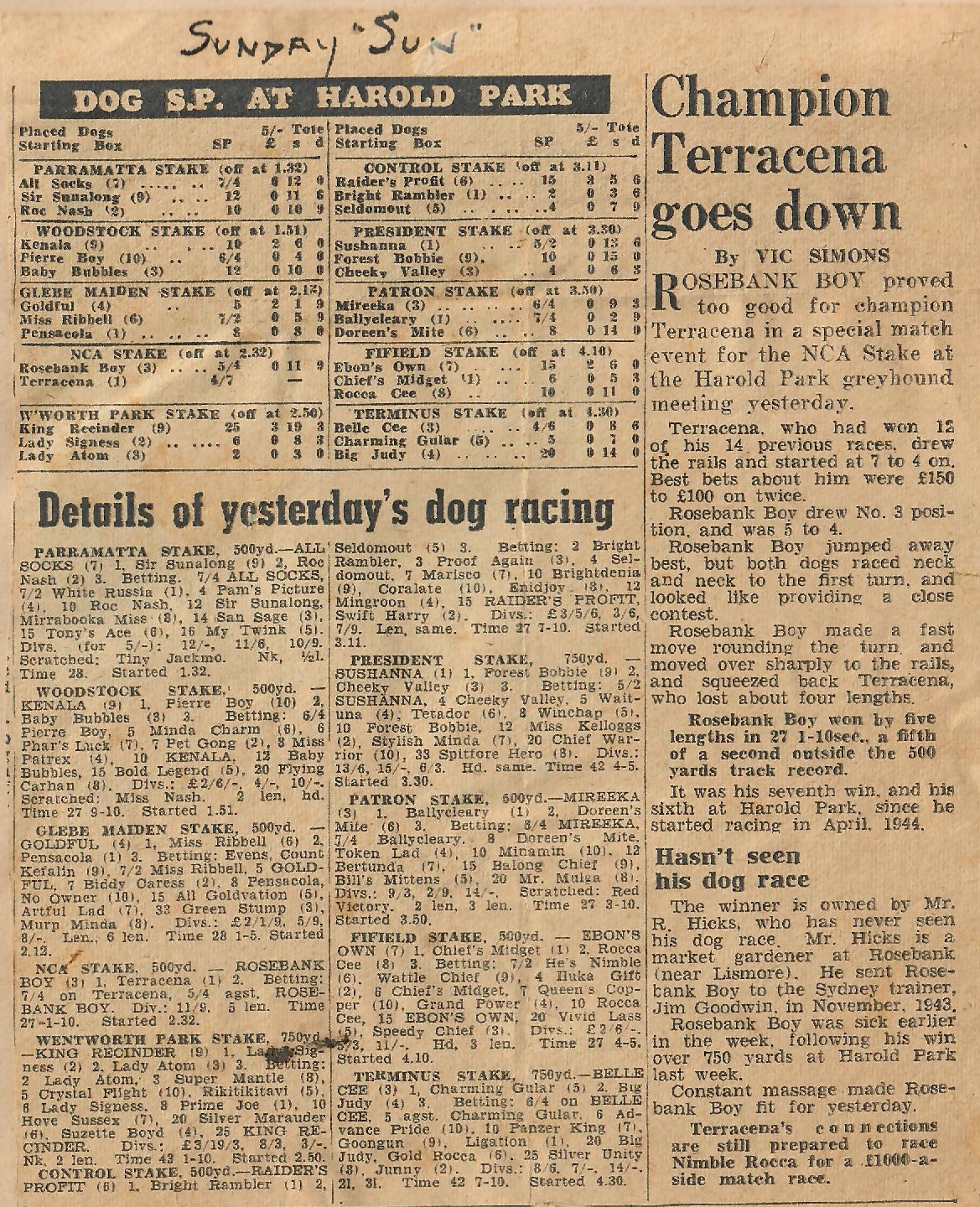 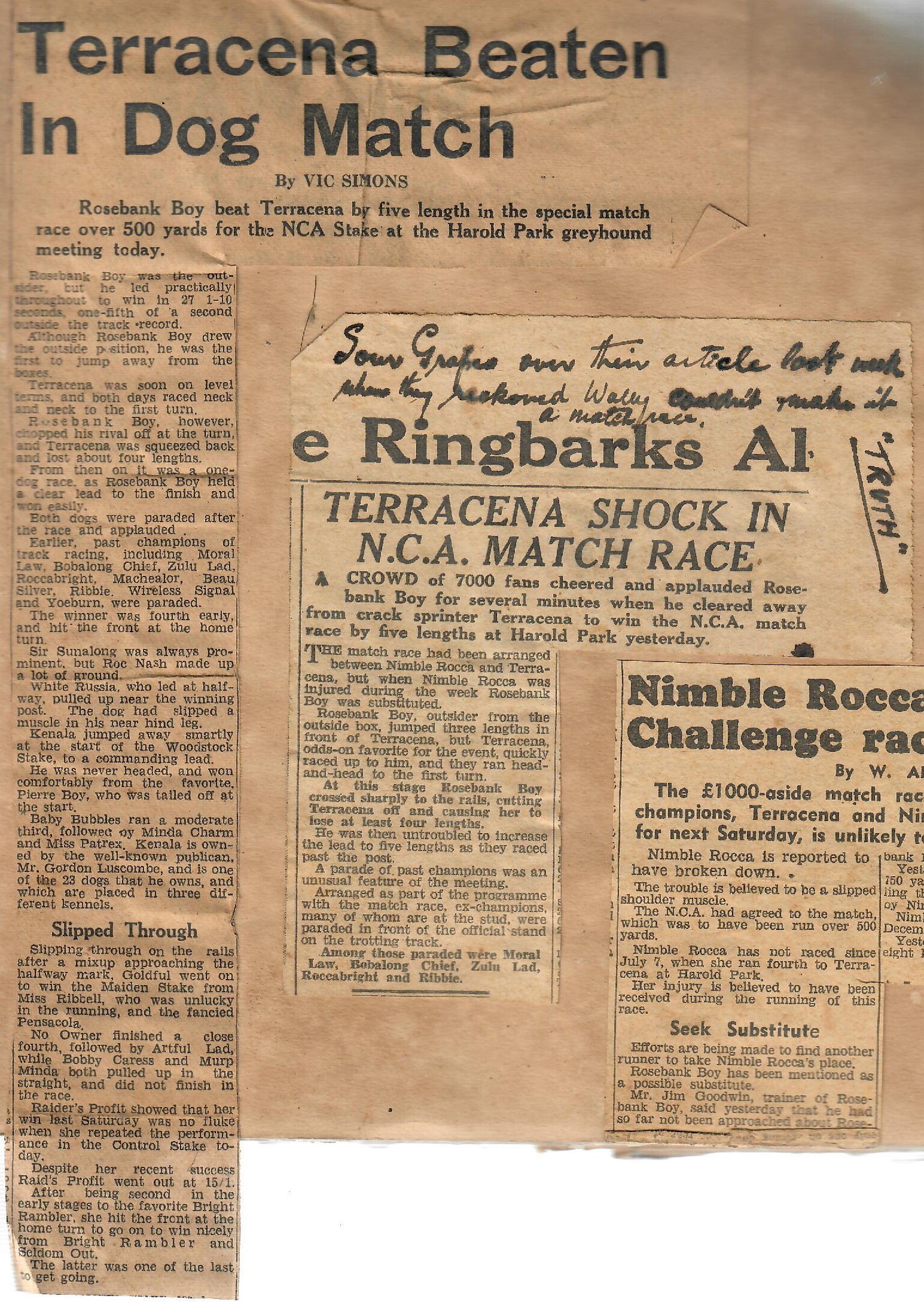 Here is an example of the pages of letters Jim Goodwin wrote to Richard Hicks. There is half a dozen five and six-page accounts of the Greyhound Racing during that time. With many colourful observations from Rosebank Boy’s trainer proving nothing has changed to the present day with similar opinions. 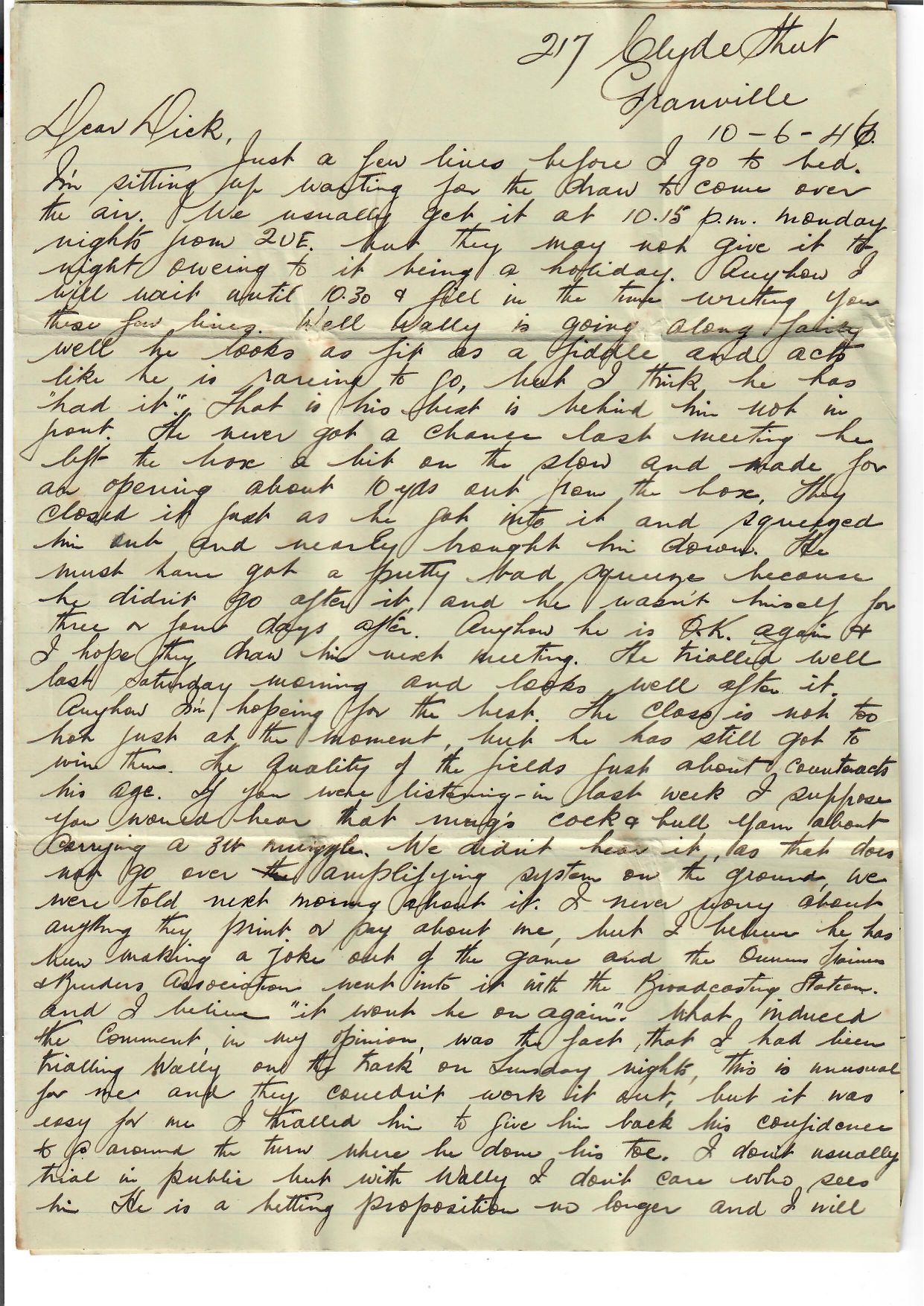 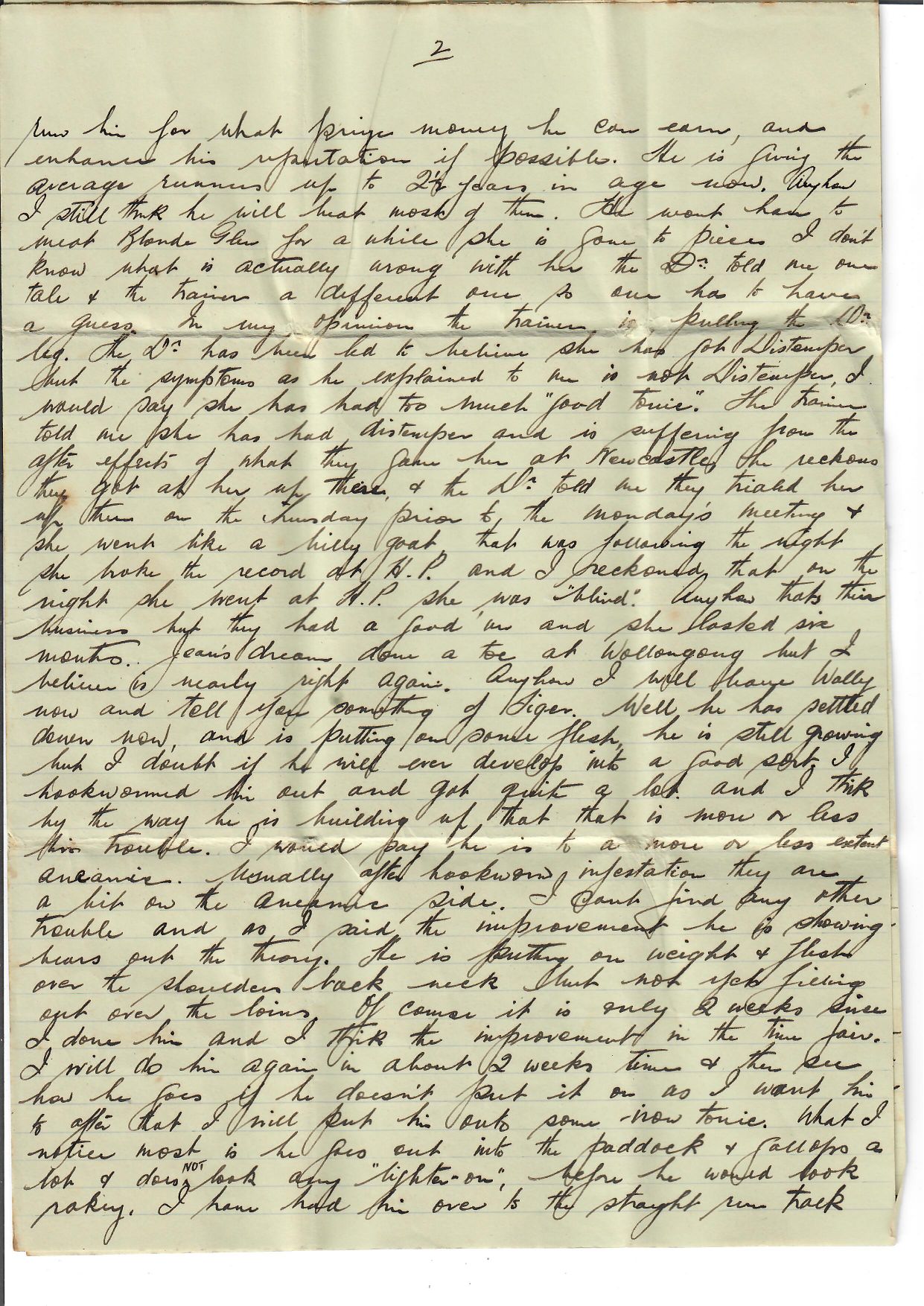