With the Sandown Cup coming up on Thursday I was surprised on the fact on five New South Wales stayers have won it. The last one was 2005 Best Quoted, before back-to-back winners Red Mystique 1998 and Smart Attitude 1999. But we have to go back to 1982 for Status Supreme Raced and trained by Brian Barrington. He beat a red-hot field including Lone Voice, Quick Pulse, Romantic Idol and Rawpack. The other winner was Kawati Boy 1978 NSW Greyhound of the Year same year, by Travel Rev his best pup by a long way. Started odds on in National Distance finished 7th. Raced and trained by Kevin De Smet a Canberra Telecom linesman brought him for $100 sight unseen. 54 stats for 24 wins 15 placings winning $32,500. Contested seven major finals, won two and finished second in three. Held the Wenty record and run under 43 seconds there six times. Had box five in Sandown Cup speared to the front early and never looked in danger. Got beaten in his heat in the fastest of the night Mariner’s Joy 43.96 but held off Delbairn Babe for second later to become a superstar brood bitch. 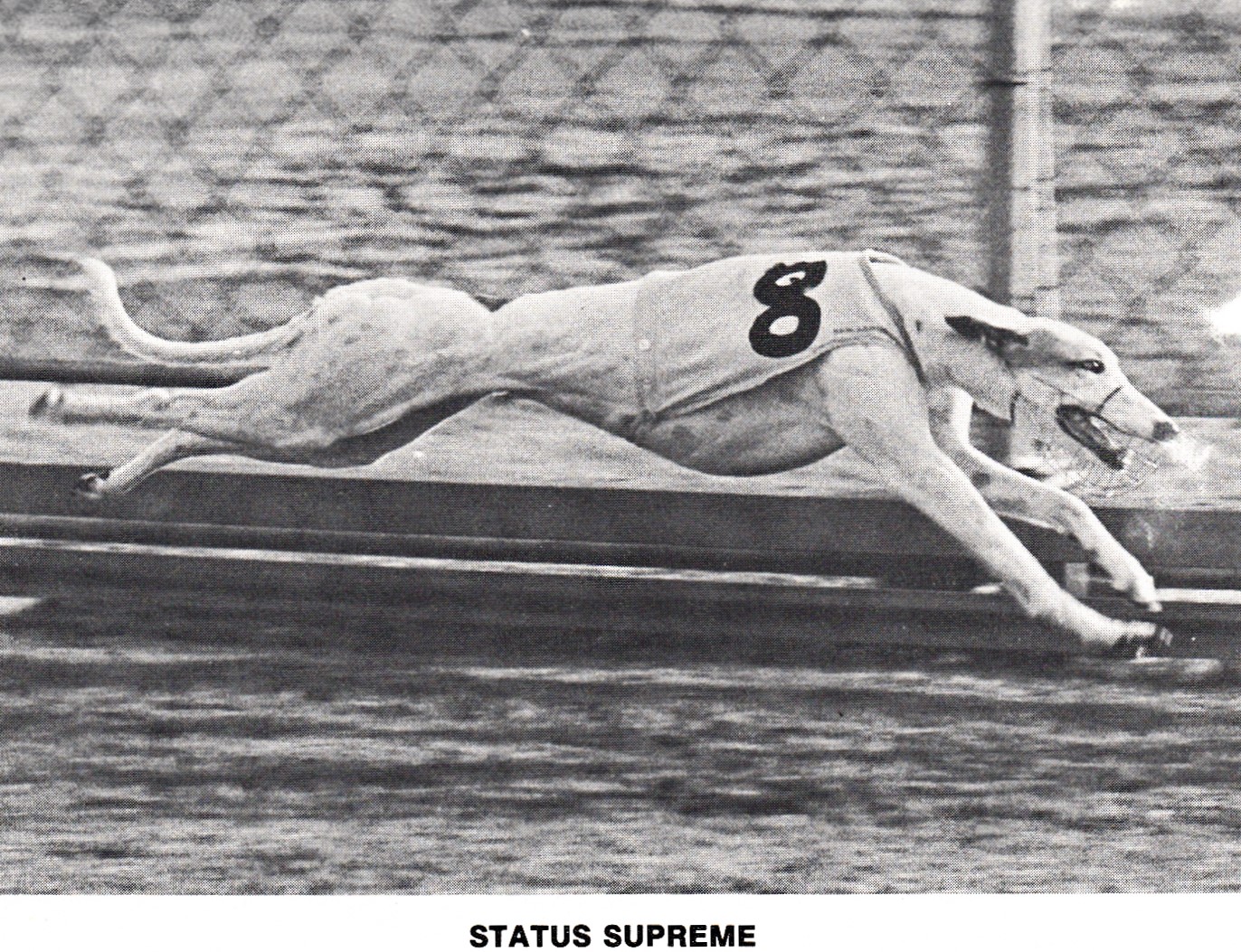 Jeff Holland – Tornado Tears was NSW bred, born, reared and owned.
Edwin Caruana– Good point Jeff but trained by Robert in Victoria all it’s career, should all the wheeler dogs trained in Victoria be classified as Victorian or NSW?

1996 –      Cup upgraded to Group 1 status. Prizemoney increases to $40,000 to the winner. Distance reduced to 715 metres following reconstruction of Sandown track

2006 –     Sargent Major leads all the way to win his first Group 1, he holds off a stout Turbo Uno this followed the shock scratching Texas Gold.

2007 –      Sandown Cup controversially declared a ‘No Race’ by stewards after Don Hazzard, the trainer of Sky Hazzard, accidentally released the manual start lever.

West Australian superstar Miata started the shortest priced favourite in the events history at $1.20 after smashing the track record in her heat. However, after missing the start badly she finished a gallant third to the Graeme Bate trained Irma Bale, his first Sandown Cup winner.

2013 –      Irma Bale defended her RSN Sandown Cup when she held off the fast-finishing Bell Haven and the gallant Miata in one of the most exciting finishes in the race’s rich history. The victory saw Irma Bale become the fourth greyhound to win successive RSN Sandown Cups after Paul’s Thunder (1970-71), Lizrene (1972-73) and Bold Trease (1986-89).

2014 –      Sweet It Is booked her place in greyhound racing folklore with a dazzling last-to-first win in the 2014 Group 1 RSN Sandown Cup. A quarter of a century after the great Bold Trease claimed his fourth and final Sandown Cup, Sweet It Is turned in a performance that matched any of the Warrnambool Warriors four cup wins. It was an amazing effort form 10 lengths a drift, she gunned down the field in front of her running away to win by a length and half.

2015 –      Sweet It Is rewrote the record books at Sandown Park in 2015, defending her RSN Sandown Cup title and becoming the sport’s highest earning greyhound in the process. Lining up in her 18th group final – her 10th at group 1 level – Sweet It Is was sent to the boxes a $5.80 second favourite behind Space Star ($1.30), and it was the latter that began brilliantly to take an early lead. From that point on is was a matter of times and margins. The win improved her record to 18 wins from 58 starts and the $175,000 winner cheque took her prize money to an Australian record $828,515.

2016 –      Bells Are Ringin caused one of the biggest upsets in group racing history when she defeated the country’s best stayers in the RSN927 Sandown Cup. Sent to the boxes the 50/1 outsider, Bells Are Ringin began well to cross to the rail and lead the field through the first turn. From there she was never headed, finding the line two lengths clear of Who Dey ($10.20) in 42.02.

2017 –     Fanta Bale ($4.60) laid claim to being one of the sport’s greatest ever chasers by registering a breathtaking victory in the 2017 $250,000 RSN Sandown Cup. Fanta Bale and Midnight Elsa made their moves down the back straight but with 150m to go, Fanta Bale still spotted the lamp lighter a four-length margin. But the tenacious little chaser railed brilliantly running for home to surge past the gallant Dundee Osprey and score by half a length in 41.87.

2018 –     Tornado Tears showed why he was regarded as greyhound racing’s next big thing after prevailing in a thrilling finish to the $250,000 RSN Sandown Cup in 2018. But the well supported favourite – he opened at $26 in early markets before jumping at $2 – was made to earn his victory. Beginning cleanly from box 7, the Robert Britton trained star settled behind kennelmates Benali and Quick Jagger and the trio soon established a gap on their rivals. It set up a spectacular finish to the world’s richest race for stayers. Quick Jagger railed under the tiring Benali to take the lead before being reeled in by Tornado Tears in the shadows of the post as Rippin’ Sam powered down the outside to just miss upstaging his litter brother. The three greyhounds were separated by little more than a length on the line and gave Robert Britton the trifecta. Britton’s fourth runner, Benali, finished 5th.

2019 –     Rajasthan caused one of the greatest upsets in the history of the RSN Sandown Cup when the 30/1 chance led all the way to win the world’s richest race for stayers.

While all eyes were on defending champion Tornado Tears in box 6, it was Rajasthan in box 7 who began quickest to cross to the fence and lead through the first turn. Poco Dorado followed him across from box 8 and as the rest of the field jostled for position, the pair established a four-length break on their rivals with a lap to run.

Down the back straight the moves came. Poco Dorado reduced the margin to less than a length as Peppertide emerged from the chasing pack to also apply pressure. But Rajasthan continued to respond, and when he was able to hold off one final challenge from the fast-finishing Ella Enchanted, the $175,000 first prize was his.

2020 –     Bronski Beat ($18.20) has won 2020 Group 1 RSN Sandown Cup (715m) with a stunning all the way performance. With prizemoney reduced to $50,000 to winner due to Covid-19 no crowd saw the Tasmanian-bred greyhound opened up a huge lead mid-race before being challenged late by True Detective and He Shall Power.

It was a watershed win for trainer Brendan Pursell, who is formerly of the Apple Isle.

The win continued the Lara trainer’s incredible recent run of long-priced winners, having scored 12 city wins in the past fortnight at an average price of $14.80.

Bronski Beat, a 25-month-old son of Fernando Bale and Ainsley Bale, was the slowest of the four heat winners last week in 42.07sec.