Here is a question I was asked to look into. Hoping to get some answers in regard to Dun coloured greyhounds. The Stud Book records greyhounds coloured Dun, Dun Brindle and Dun Fawn. Mick Floyd posted the following story back in 2014.
It’s not often you see a chocolate coloured greyhound. It’s even rarer to see them win a race in the city. But that’s what happened at Sandown on Sunday 24th of August when Dun And Dunna broke through for his maiden win.
Dun – the official colour of the winner of the first race on the card, Dun And Dunna – is the most unusual colour for greyhounds. It occurs only once in every 1500-2000 litters, or less than 0.01% of all pups. Dun And Dunna’s chocolate coloured coat makes him stand out from other greyhounds, a fact not lost on his trainer Bianca Whitfield.
http://www.sandowngreyhounds.com.au/2014/08/27/dun/ 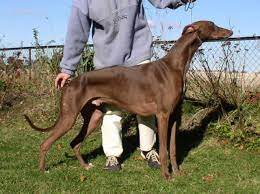 Mick Haskas – Chocolate fantasy
Chris Nutt– I’ve only ever seen 2 Dun greyhounds in 30 years of following greyhounds.
Gwen Ennis– Are used to be more around in the 70s
Tiger Nelson– Ronny gay trained stacks ahoy he was dun
Howard Gray– I’ve only ever seen one a bitch called Civic Castro trained by the late Jim Attrill in SA in the 60’s.
Alan Marum– Dun the the skin colour….l think pied rebel was a dun…he was white and black…nose is Reddy brown not black
Neil Brown– Alan Marum He was White and Brindle Pied Rebel.https://historyofgreyhoundracing.com/tara-flash-pied-rebel/
Alan Marum– Neil Brown they had him on farrels kibble. My memory of him.. l was about 15at the time…
Alan Marum– I’ve seen a few in my time ..but they are rare…
Steven Van Oirschot– Some blue dogs with a winter coat look like the dun colour
Kayla-Jane Coleman – Yes Anne Hector could probably post some pics of her chocolate puppies (one is even her profile.pic lol) I know she had 2 in one litter maybe more
Mick Haskas – Kayla its racing name was chocolate fantasy?
Kayla-Jane Coleman– Mick Haskas yes.
Kayla-Jane Coleman– Mick Haskas yes chocolat fantasy. No E. Also Had Dun fantasizing. And another litter mate green eyed mocha. Don’t think as successful.as this story. But if wanting to see more of this colour Anne had some and think.won at wenty
Mick Haskas– Kayla-Jane Coleman thats the only one that i ever saw i would like to see a MERLE
Robert Wilson– In a 40 year of greyhounds career I have never seen a chocolate greyhound, certainly not one like this. In England, I would like to mate two of these and create my own Cadbury Chocolate strain with a Kid Chocolate somewhere amongst them. Thank you for a really interesting picture.
Heather Villinger– Here is the actual information. A DUN greyhound is defined by the colour of its nose leather. The nose leather cannot be black and it is a light pinkish brown. It is not always the case but generally one parent will be DUN or carry that gene. I’ve seen dogs identified as DUN at earbranding where the controlling body checked out the puppy only to ascertain that the earbrander was 100% correct. Not that I’m bragging or anything and this pup did not have a DUN parent.
PJ Gray– That’s right Heather a true dun is determined by the nose leather and the colour of the eyeliner that’s also a brown or pink colour, the best way to describe a dun is the same as the liver colour Doberman, I actually branded a blue dun dog in about 98 the only one I’ve ever seen.
Laura Frances Caldwell – I’ve seen a couple of Dun greyhounds here in Ireland and in the U.K. They are a rare colour I would say. And the colour seems to come from the Premier Fantasy lines. Here’s one on greyhound data. Also
Mark Mayers has Duns also I’m sure he could show you also.
Open for Data Information on Blackout Blind
Coral Scott– Had a few with red noses always liked the. Blue brindle most were by blue birch but don’t think many would remember him…doug
Glenn Huxley – Interesting. Thanks for posting.
Mark Small – Great looking dog
Robert Wilson – In a large greyhound kennel attached to a track, he would be the kennel girls’ favourite. Most of the girls were greyhound crazy and brought up with one or two in the house, leaving school they were naturals to end up working with them. Love me, love my dogs was a way of life for them?
Sharyn Marshall– There were 3 Dun pups in that litter we had the two bitches as pets. Unfortunately we lost one in an accident 3 years ago however PeppA ( All Dun In ) is still enjoying life on the couch May be an image of dog and outdoors
Sharyn Marshall– She has the gold eyes liver nose – they were by Premier Fantasy
Sharyn Marshall – May be an image of dog
June Whyte – Gorgeous Colouring. 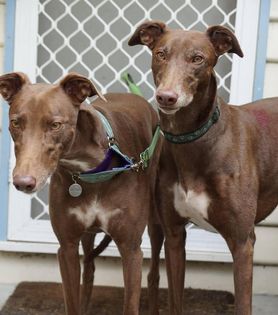 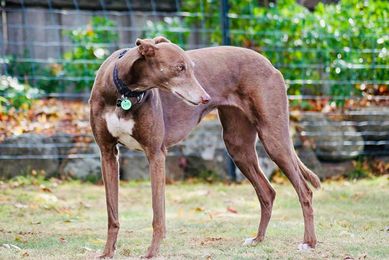