Brennan Ryan posted this piece on SA Stayers.
Angle Park history – SA Distance Championship
For over 50 years the SA Distance Championship has continued to be a long running feature event staged on the Angle Park calendar.
Greyhounds in the name of Pommie Dasher, Ascapella Miss, Ibrox, Bristol Idol, Golden Skimmer, Saltwater Sid, True Temptation, Osti’s Joker, Proven Dream, Satanic Cash and Token McLaren have won it.
1972 saw the inaugural running of the feature race staged at Angle Park known then as the “West End SA Distance Championship”.
Pommie Dasher (Chariot Charm – Telga Venus) won it and trained by Ron Hill having raced 104 times for 28 wins and 51 minor placings.
The blue brindle was whelped in Sept 1970, a recurring shoulder injury, would eventually force connections to retired her in 1975.
She also held TR’s at Angle Park, Princess Park and Strathalbyn.
Pommie Dasher’s major successes were the SA Distance Championship and SA President’s Cup both over the distance.
She also displayed her ability by defeating Yodel High (1973 SA Dist. C’ship winner) on three occasions and was runner-up to champion Victorian stayer Lizrene in the NCA Cup at Sandown Park.
Pommie Dasher was raced by Ron Hill’s wife Alice.
Howard Gray – They missed a handy one there in their write up…Cool It Pop…😉…Click on link for full details
Pedigree of Cool It Pop
Howard Gray bit of kennel favouritism their lol
Howard Gray – Brennan Ryan I can actually tell you a bit more about Pommie Dasher she was bred by a famous SA breeder at that time Pam Dodd and Ron got her relatively cheap because she was very timid/spooky. To get her out of it Ron used to take her down to the Elizabeth railway station at peak hour where all the people were getting off and on the train and it worked wonders. Pam Dodd bred many great dogs of that era including the great sire Takiri and his brother Marr William who was exported to America where he was a top stud.
Graham Fischer – Some fabulous SA greyhounds have graced Angle Park over 50 years with magnificent races. 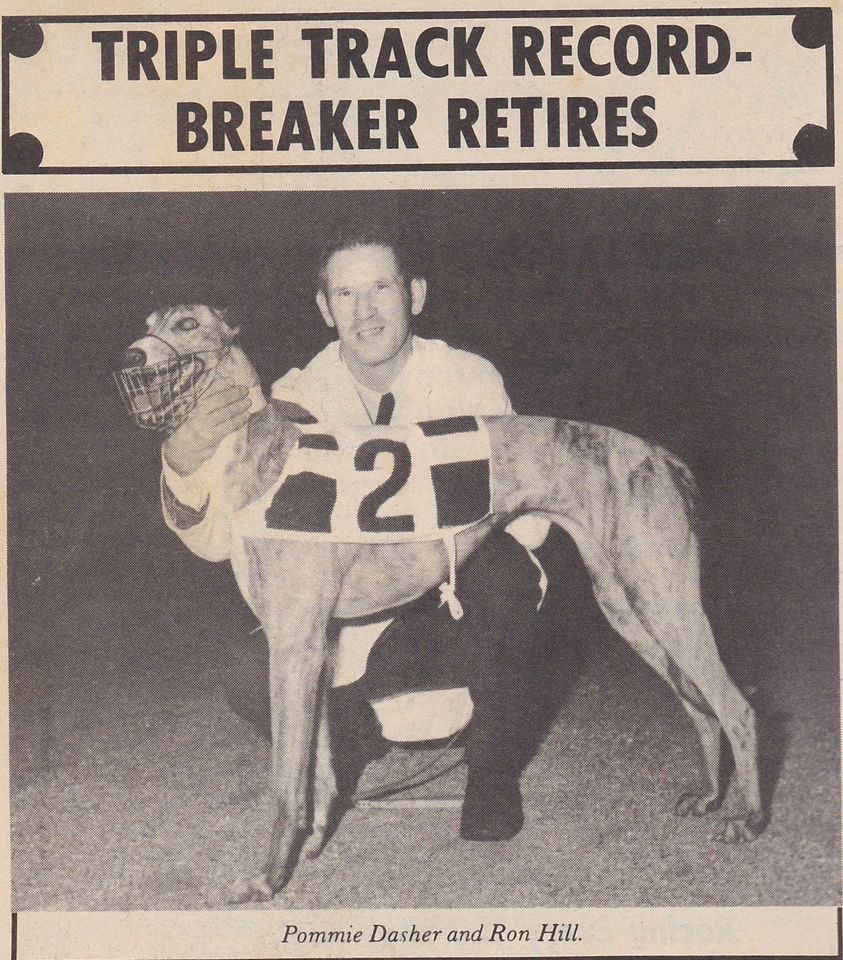