The Sandown Cup is on next month and I found this story from the Sydney Daily Telegraph written by Jeff Collerson and John Davis. I recall doing the “Catching Pen” on the Sunday with the unpresented Cup on the desk and the show opening to “Who Let The Dogs Out” by the Baha Men. My only disappointment as a club director at the time was it was not re-run the next week. It didn’t clash with the Albion Park Gold Cup heats which were run on May 31st. The Cup was on May 17th. We still have the Trophy on display upstairs at Sandown. The website coverage below covers all the action.
http://www.sandowngreyhounds.com.au/…/10-years-on-hard…/
Nathan Goodwin – Paul Felgate had Miss Brook in that and is still devastated to this day!
Adele Powell – Nathan Goodwin yep wasn’t happy
Neil Brown – Great man Paul stayed here at my place many times with Miss Brook we even had Just The Best as a guest. Had every right to be unhappy.
Ian Mccaig – Remember it we’ll said to my mate he just opened the lids felgate the training spat it had a big bet on he’s dog if I remember correctly
Paul Garland – Never pick up a greyhound like that 😓
Nathan Bendeich – Paul Garland How do you get a greyhound off an arm ? Never seen anyone grab it from front to back in all my life ! How do you box your dogs ? Nothing wrong with it at all
Paul Garland – Worked with greyhounds 20years white City harringey ect you lift a dog at the back of his legs
Nathan Bendeich – Paul Garland we all know the best way to lift a grey Saying NEVER implies serious ramifications ? There must be 5000 lucky greyhounds daily that get handled this way with zero consequences from a hand or arm placed under its stomach ? Seriously 😒
Luke Gatehouse – Lovely man Don – made the trip north and landed the Superstayers Invitational beating Miss Grub, Miss Brook and Ellie’s Diamond in 2007.
Mick Floyd – I must have been at his place for two hours doing the ’10 years on’ stories. Lovely fellow, was glad he came to the Cup in 2017
Mick Haskas – To this day .They should have a box covering that lever.The only time you have to use the lever when the auto start fails so on the rerun the starter goes for hand start open the box and lever start
Mick Haskas – As a starter for a long time i said this about a device over the lever too simple and the WRONG person to suggest it remember this incident very well
Heather Cooke – One of the gentleman of the sport, couldn’t meet anyone whom would be there to help with advice guidance and always enjoyed a chat
Edwin Caruana – Yes Heather always up for a chat, Don unfortunately left us a couple of years ago.
Heather Cooke – Edwin Caruana yes that he did but he would always give you the time of day.
Rob White – Would see him with his Greyhounds’s often in Glenroy, over the road from the northern Golf club.
Jayne Jarman – Sean Donnelly this is what Matt Corby was telling us about at the track one night
Rex Griffin – This is part of history,which I’ll never forget 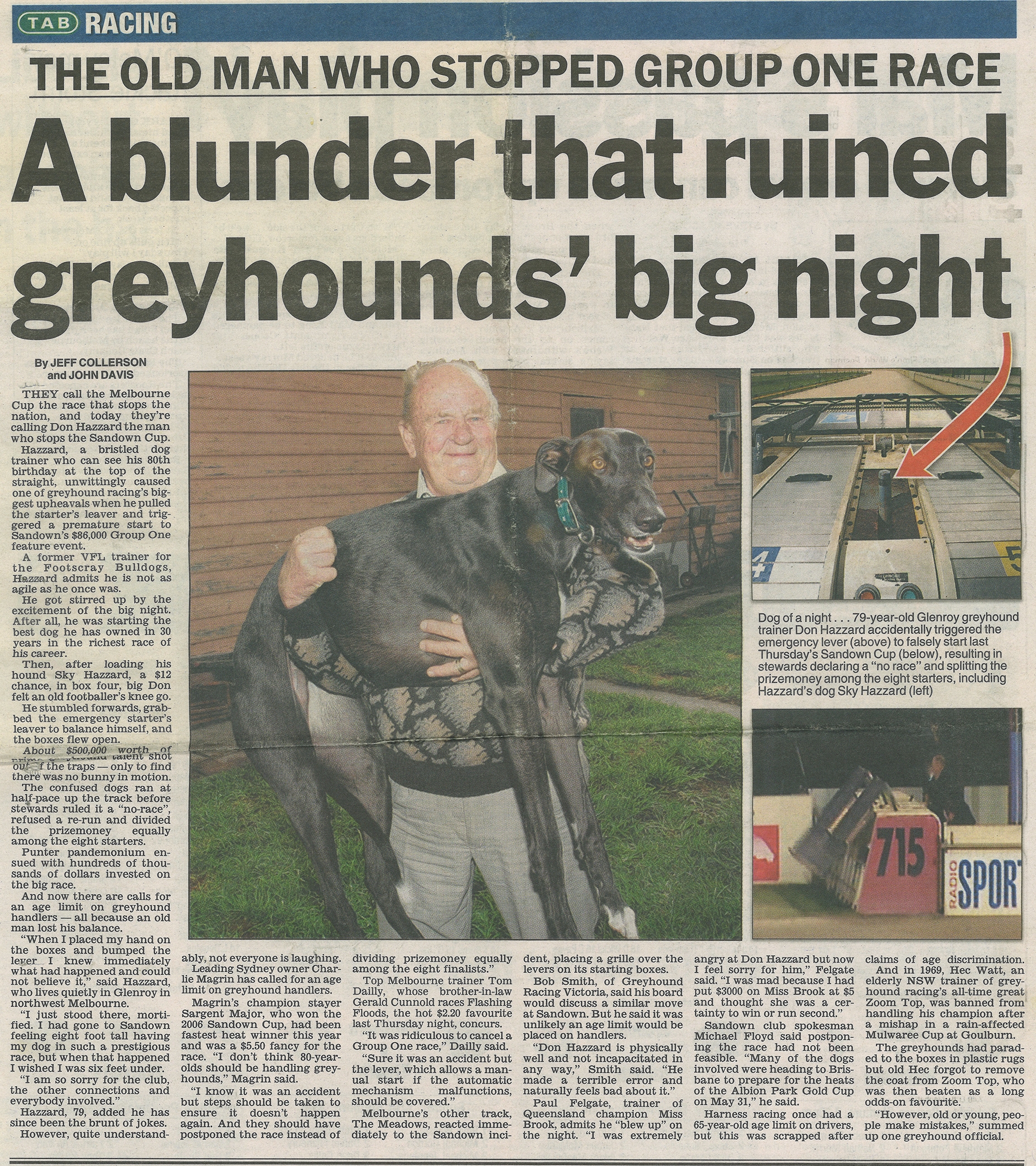