Had a call from Faye and Bill of Wonthaggi who send this photo of Faye’s Grandfathers greyhound Fathers Lad his name was J Rowe. The pic had been hanging on the wall of a Hotel in Wonthaggi. He must have been a handy dog. But I couldn’t find reference to him on Greyhound Data. He was by the famous Fathers Footsteps. John Reid has told me about Wongthaggi he was a regular there with his father Peter. John if see this can you let us know a bit about the track. Particulaly where it was, surface and type. Pretty sure Doug Scott can help there as well.

Neil Brown– Scott Sinclair Thanks Scott very interesting, the great Des Carlson what a lovely bloke. Could he train a winner.

Robert Mccurdy– Charlie hingston ex director Olympic park ran his furniture van to Wonthaggi with the greyhounds an there trainers on board and I think it was on Tuesday afternoon. 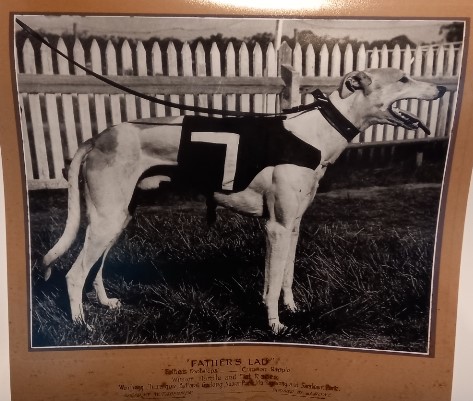 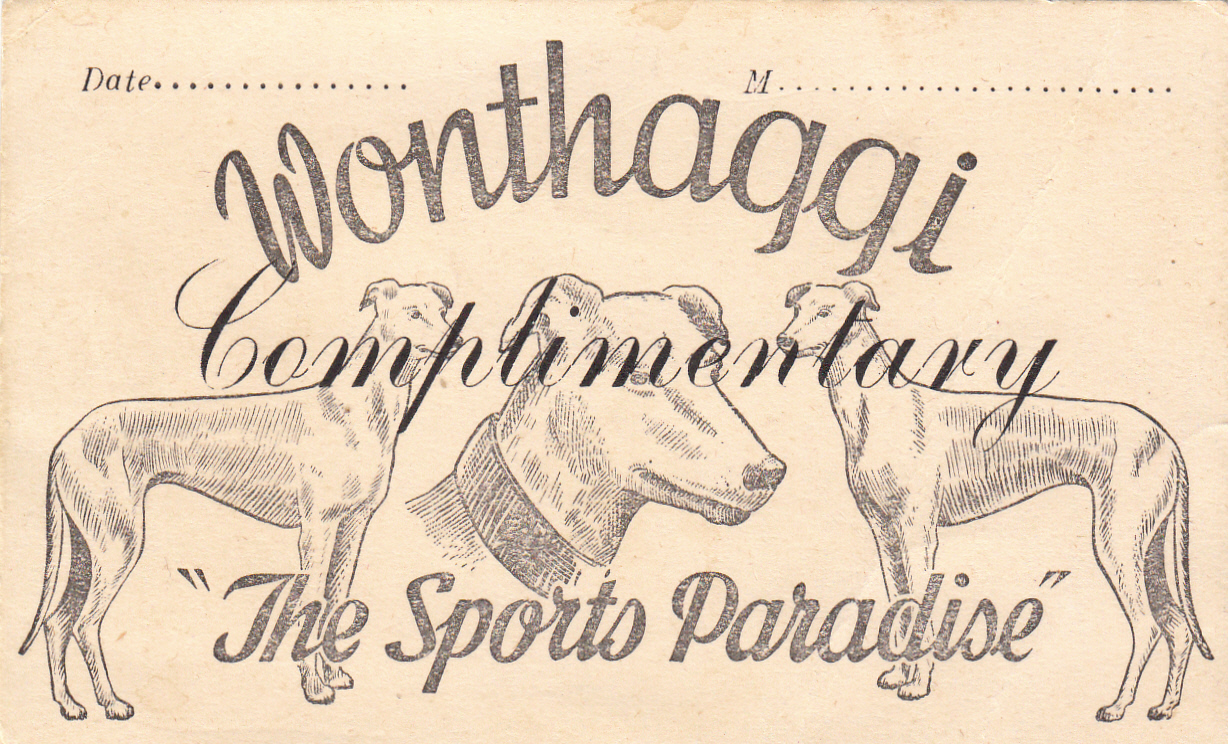 Pity they don’t race at Wonthaggi any more I have a Complimentary ticket to Wonthaggi Dogs ” The Sports Paradise”.

Jon Roberts – What year
Edwin Caruana – Before our time Jon.
Robert Mccurdy– Edwin.bit had to tell I do remember Charlie Hingston taking greyhounds and there trainers to wonthagie in hi furniture van from Melbourne but not that parade it may have been a bit earlier but if you look at the photo a greyhound has a knitted collar so they may have had coursing but I have not heard of coursing down that way
Edwin Caruana– Robert A dear old friend of mine Bill Gay (long gone RIP) used to tell me stories about taking his greyhounds racing to Wonthaggi and other tracks in a furniture van
Robert Mccurdy– Edwin Caruana if only Billy was alive today he could tell you some stories about the old and very popular Preston trial track I wonder who can remember that trial track p
Edwin Caruana– Robert Mccurdy if anyone remembers it would be Peter Reid.
Robert Mccurdy– Edwin Caruana thanks Edwin I can remember it well
Allan Hawkswell- That’s the late Fred Booth territory.
Edwin Caruana– And in latter years “Dollar” Dave Hodgson, arguably the best muscle( manipulator) man ever. He donated all money earned checking Greyhounds to Wonthaggi hospital, they finished up naming a hospital wing in his honour.
Thomas Clark– Edwin Caruana You would stand in line at Dave’s , possibly behind someone with a pony or any other animal at Kilcunda . After manipulating ect , on our greyhounds Dave would ask how far have ya travelled, Melbourne being the answer, he would charge a $1 per check. Then we would go surf fishing. I believe he was flown up to Sydney to check the champion horse All Shot during their carnival.
Edwin Caruana– Thomas Clark And if you tried to pay extra he wouldn’t accept. Tommy Smith used to get him to work in his horses when others couldn’t find the problem.
John Reid– I wonder how many of us oldies are left,who enjoyed the trip to Wonthaggi ,I was a school boy in those days,and remember those trips,
Coral Scott– Can only remember going to Wonthaggi in the furniture truck kids sitting on felt on the floor with the dogs good times though….doug
John Reid– Doug was it Charlie Hingsons van,I can’t remember any others doing Wonthaggi Frank GillThe Carlton full back did city and some of the country meetings north of Melbourne .
Robert Mccurdy– John Reid John is was Charlie Hingstons van believe me it was around the 1950s I can remember going on it with my father and his greyhound
Edwin Caruana– Good memories Robert.
Coral Scott- Yes john we went to trials in the furniture van to white city I won my first race at Maribyrnong in 1953…doug