I am hoping someone can throw some light on this story in regard to Wade Park. He changed hands in 1977 at Auction for $20,000. An Australian record at the time in today’s money it’s about $120,000. Fair bit of hooch for 1977 I am wondering how well he raced for the new Syndicate no records I can find can fill us in. I was looking for some information on Wade Park and came across this report. He was a finalist in the 1976 NSW Greyhound of the Year won by Victorian stayer Mandarin Girl the other contender was Baguio. He certainly had a top year as written here. Seems sad he never raced again after changing hands for $20,000.

Garry Williams – I don’t think he raced that well, but was off the scene for a long time with a partnership dispute was one of the fastest dogs I have ever seen 👍👍
Joe Baldacchino – All I can remember is that he was a good dog. Named after the dog track at Orange.
Jeff Collerson – He held the WP record at one stage when trained by Kevin Harrison from Orange. Kevin also trained a tough stayer called Dainty Dasher and yes, Kevin named Wade Park after his local track. Don’t know how the dog went after that big sale can’t even recall him racing after Kevin sold him
Mark Small – Jeff Collerson WOW you’ve brought back some wonderful memories mate … Dainty Dasher was a “great” stayer and Wade Park, a real good and beautifully marked dog from memory WITH the track at Orange being probably our favourite hunting ground for plunges.
Dad won the ‘72 Cup there with The Cadillac and I reckon we had a 70-80% strike rate there 👌 😜 🤑 🫡
Sid Swain – Jeff Collerson ownership dispute jeff never raced after the sale.
Jeff Collerson – Sid Swain Thanks mate
Mal Cuneo – Kevin had the hardest straight tracks i have ever trialled at
Peter Dawson – Mal Cuneo yep 650m straight. Up a very steep incline. Much more testing than Rourkes.
Ken Mitchell – Those days were great. Wade Park raced against other greats such as Bagio, Lizerene, and others
Ian Hilditch – Mustard Jones from Windale had a hot litter by Wade Park out of Ungwilla’s Choice. Wade’s Return was probably the best. Around the same time in the same street the Maroney Family had great success with the offspring of their bitch Little Impact. The Ba… See more
Patricia Dean – Yes Kevin never raced many after Dainty Dasher I trained a few dogs for him he was a great owner.

Shane Hookey – Yeh Neil, I remember the Queensland champion King Tokyo changing hands,to Top Victorian trainer Joe Hili during the halcyon days,and he was never the same dog here,as he was on the grass,was very costly to his new owners and punters for a fair while.
Sandro Bechini – His Richmond Derby win had to be seen to be believed. He can from last and railed the ears off the place and nailed Baguio in the last couple of strides. I think he was only 21 months old or so at the time.
John Staines – What a great dog great memories. 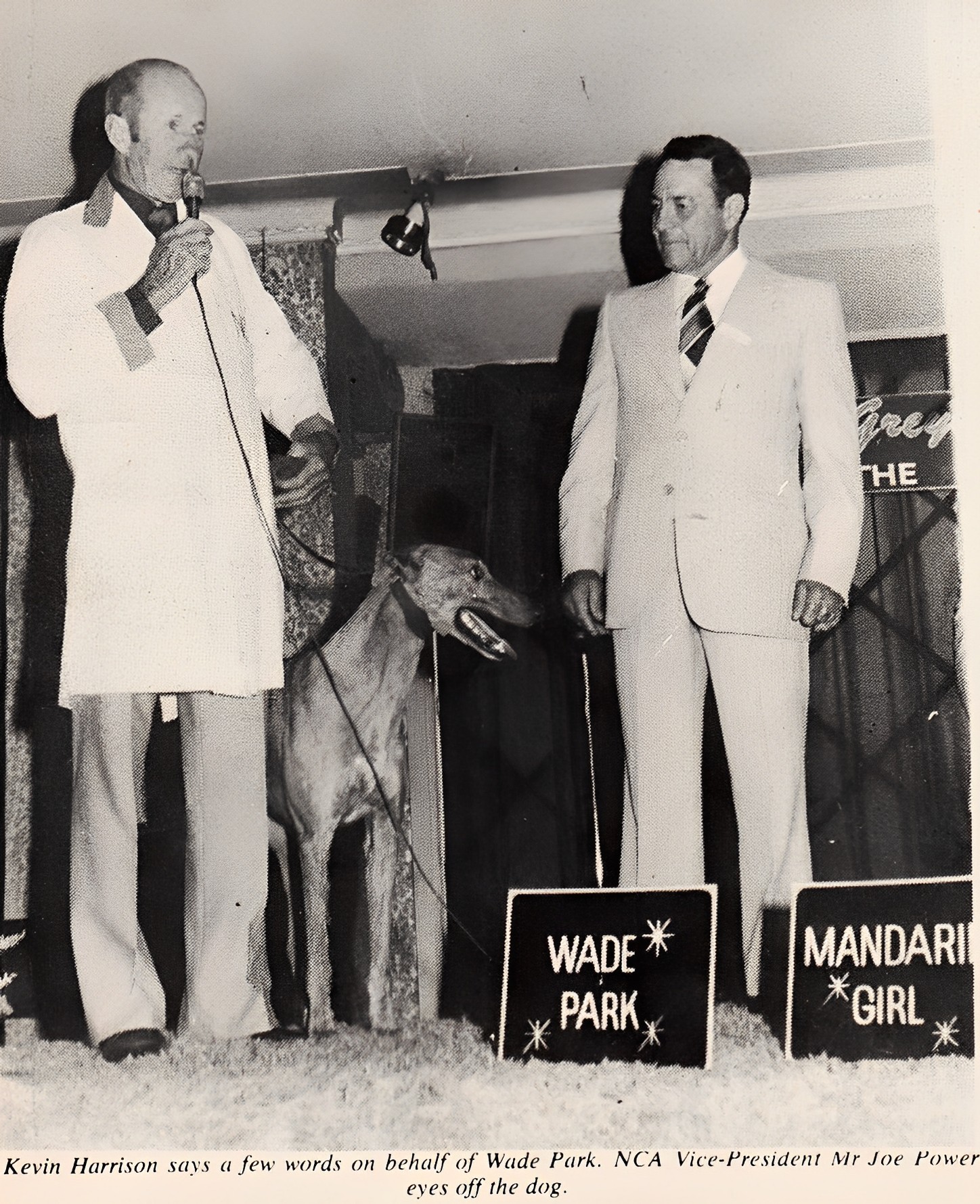 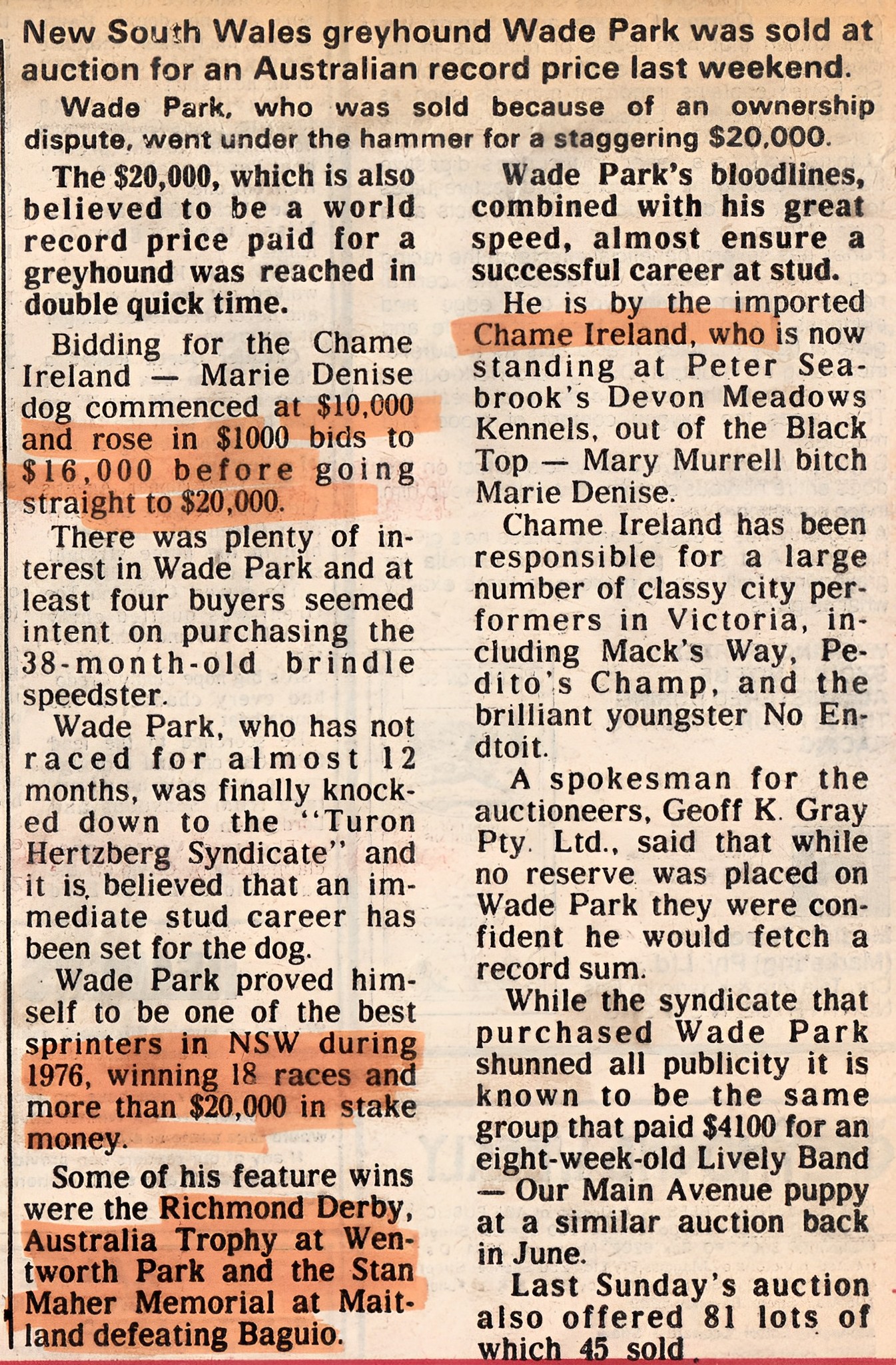